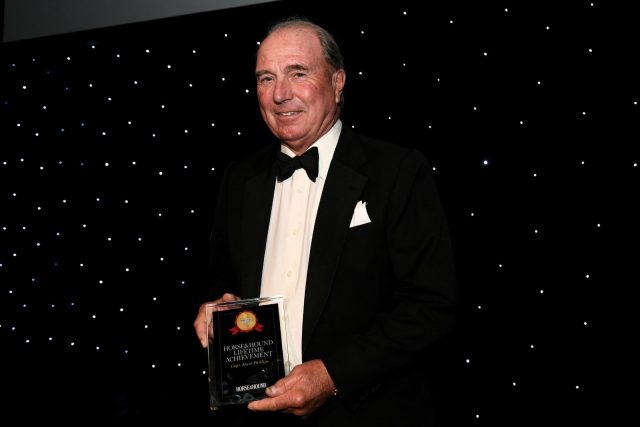 The announcement of his name triggered a standing ovation, and Mark said he was “overwhelmed” by the response. His children, 2006 world champion Zara Tindall and Peter Phillips, were both present to watch him accept the award.

“It’s a privilege to have had so many great people and horses in my life,” Mark said, “from winning 26 medals as coach to the U.S. team, to those who rode on British teams with me, to those who helped me.”

Mark won Olympic team gold and silver medals for Great Britain, as well as Badminton four times and Burghley once. He has designed the cross country course at Burghley for most of the past 25 years and also laid out the track for the 2018 FEI World Equestrian Games at Tryon this year.

Phillip commented: “He’s never one to brag or talk about the incredible success that he had as a rider and now even as a course designer. He is truly a great man and we are all very fortunate to have had him in our lives.”

Mark is also one of six new inductees who will join the USEA Hall of Fame during the 2018 Induction Ceremony, which will be held on Dec. 8 during the USEA Annual Meeting & Convention in New Orleans, Louisiana.

There was an emotional moment when Jane Felton was given the Horseware Groom of the Year award. Jane works for Irish eventer Jonty Evans, who is continuing his recovery from a traumatic brain injury and was in attendance at last night’s awards.

The full list of winners for the 2018 Horse & Hound Awards: