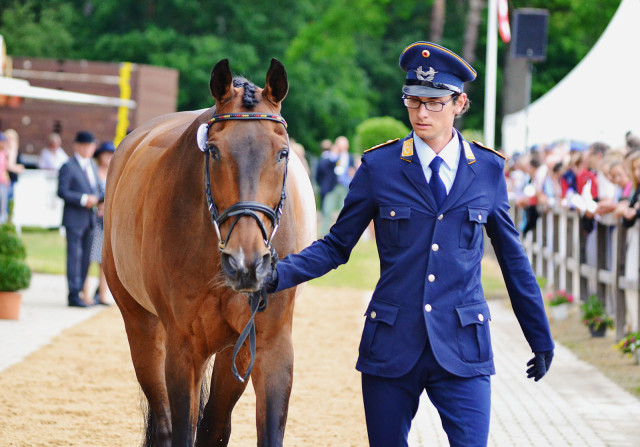 Luhmühlen just held a press conference to address the tragic death of Benjamin Winter after his rotational fall in the CCI4* this afternoon. Much of the press conference was held in German, and the press office is working on an English translation. In the meantime, here are direct quotes from course designer Capt. Mark Phillips, FEI Safety Officer David O’Connor, Gillian Rolton of the ground jury and Chief Medical Officer Dr. Annette Lorey-Tews in the order in which they were made.

Capt. Phillips spoke first: “Personally, I feel sick to my stomach. We had a course that a lot of people thought was easier than last year. We had perfect conditions, great footing, a sunny day — but we had too many falls. Six rider falls, two horse falls — it’s too many.  One of the problems today was that most of (the falls) were at easy fences. Ben Winter’s fence was a straightforward fence that has been there for five years. The oxers at five and six are straightforward fences.When we get these bad accidents at simple, straightforward fences, it’s worrying. Where do we go? What do we do? It’s when riders don’t respect the fences enough that they make a mistake, and nobody wanted a mistake to be made today.”

David O’Connor spoke next: “It is of great importance for us to realize the gravity of this. All the organizations involved in the sport take the job very seriously to minimize the risk aspect from all parameters, from all the fences to the course design to education to qualifications — so much has been worked on in the past years. Moments like these take us back to a time to reflect. As human beings, we choose to do sports, and sometimes we choose a sport with greater risk. Nobody who steps in a stirrup on a day like this expects, plans for or thinks of any type of accident. This is a tragic accident, and there’s no way to take the risk away. It’s impossible. There’s no way to make the sport safer than life itself.”

Capt. Phillips then addressed the history of falls at this fence: “There have been two falls there in the German Championships (in past years) — Andreas Ostholt and Andreas Dibowski. One over jumped and the other was similar to what happened today. … It’s a fence that riders need to take back and give the horse time to jump it. I spoke to Chris Bartle (coach of the German eventing team) earlier today, and he said exactly that to Ben Winter when he walked the course with him. Unfortunately, Ben didn’t do that, and he’s paid an unacceptable price.”

Gillian Rolton, a member of the ground jury, then spoke about Benjamin’s ride on Ispo up until the point of the fall: “We were sitting in control. We watched Ben’s first ride. He went around clear, and he jumped well around the course on his first horse. He’d already jumped that fence once. On the second horse, he was traveling around the course; he was going forward. He looked to be balanced through the fences. We only saw that particular moment when he was on the ground; we didn’t see anything to indicate that that was going to happen before that moment.”

Chief Medical Officer Dr. Annette Lorey-Tews spoke last. English is not her first language, so this is a rough summary of her comments: “It was an unlucky accident. He fell face first, and there was bleeding in his brain. We tried to save him here and give him intubation in the helicopter going to the hospital. We could not save his life.”

The press team is working very hard to translate the rest of the comments made at the press conference into English. It goes without saying that everyone is in shock, and the mood is extremely somber here at Luhmühlen as Germany mourns one of their own. There are just no words to summarize the terrible nature of this tragedy.