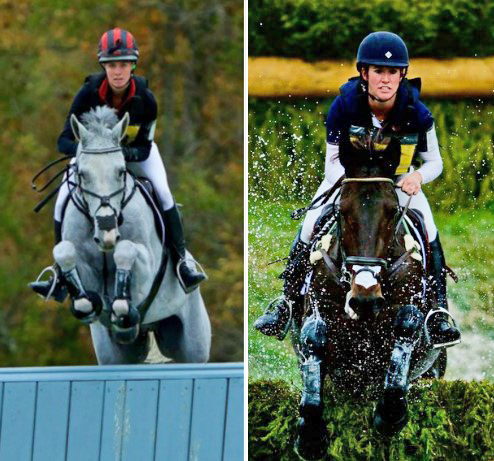 It’s going to be a big year for young riders Caroline Martin and Jenny Caras, who have just been tapped to represent Team USA on the new Karen Stives Developing Rider Tour. This opportunity, supported by a $1 million gift from Olympian Karen Stives, will send Caroline and Jenny to both the CIC3* at Rockingham as well as the Under 25 CCI3* at Bramham this year.

Caroline Martin will compete Center Stage, a 10-year-old Holsteiner gelding owned by Caroline and Sherrie Martin, and Jenny Caras will compete her own Fernhill Fortitude, a 12-year-old Irish Sport Horse gelding. They’ll spend a month in Europe with Developing Rider coach Leslie Law in preparation for both events; Rockingham runs May 20-22 and Bramham June 9-12.

This will be a return trip for Caroline, who competed Quantum Solace at Bramham in 2015 during a brief stint in Europe. Both riders had breakout years in 2015, accumulating multiple clear cross country trips around some of the toughest North American events, including Fair Hill, Bromont and Jersey Fresh.

“I’m just in awe of the generosity that everybody has shown me and the faith that they’re putting in me by awarding me this money,” Jenny said. “It’s kind of a dream come true that I have people believe in me enough to put their faith behind me. I think this opportunity will make a world of a difference for my career.”

Caroline said its an honor to receive a grant named after a rider who “was a fierce competitor,” she also said she’s proud to be  heading overseas on “Connor,” a horse she produced through the levels.

“This trip isn’t just about competing; it’s about making us better horsemen. This is going to improve us drastically. We’re going to learn under the pressure of representing the United States, so it’s a good preparation for the next step, which would be competing on the senior team,” Caroline said.

“We’re really fortunate that we have this grant because the Bramham U25 is the highlight for U25 riders in the world,” Martin attested. “This is the most important competition we have. Sending U25 kids from the states over there to compete against the world will show us how good we are and how much we need to push ourselves. We need this so that we know what we need to work on for the future, because hopefully, at some point, Jenny and I will be on teams together.”

Please join us in congratulating Caroline and Jenny on their big news. We look forward to following their trip overseas to make Team USA proud. Many thanks to Karen Stives and the USET Foundation for making this opportunity possible.