EN TRENDS:
This week’s coverage is brought to you by Kentucky Performance Products. Collect your free stickers here! 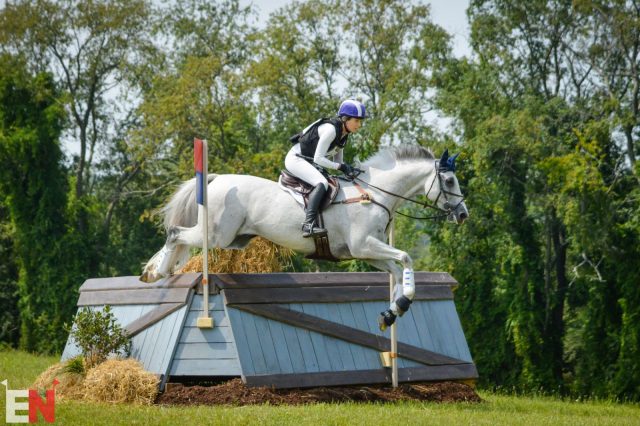 Saturday at Millbrook Horse Trials was filled with the buzz that only a big cross country day can bring. While there was much to be excited about this year — long awaited reunions between members of the eventing community, some beautiful cool and dry weather (for a change), ground that wasn’t rock-hard, and a bustling trade fair and vendor village featuring familiar names and new local business alike — hearts were somber in remembrance of course designer Tremaine Cooper.

The Millbrook Horse Trials organizers and course designer Morgan Roswell, who stepped into the roll this year, and builders Jamie Gornall and Tyson Rementer dedicated the cross country courses in his honor and competitors celebrated his legacy by jumping it. 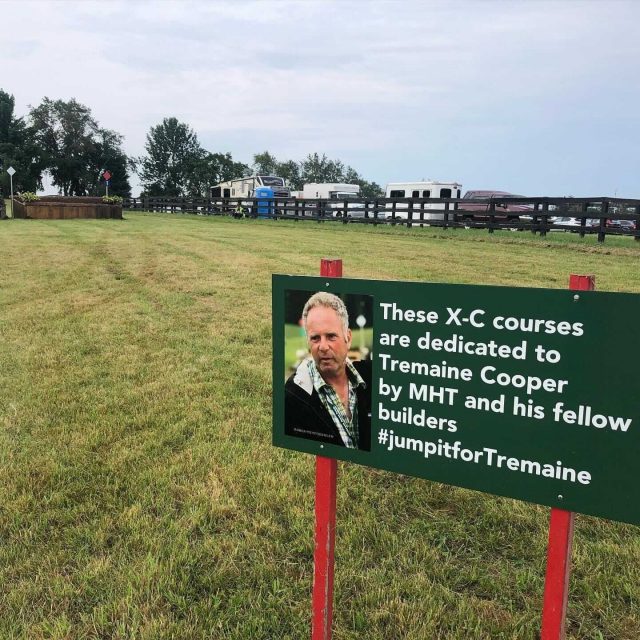 Scores in the Advanced division were packed tightly after dressage, with less than a point separating the top six competitors and less than a pole separating the top fourteen of the thirty five combinations in the division. Holly Payne Caravella and CharmKing topped the leaderboard on a score of 27.3 after the first phase and they remain in pole position at the end of the day today, adding a single time fault to their score.

“It wasn’t really intentional, but I ended up being only one second over the time,” said Holly. “I just really wanted to have a great round. I thought it walked a really tough track and walked very forward and committing. He’s definitely green at the level and he likes to add strides when he gets worried, so I thought it’s gonna be a really tough track for him.” 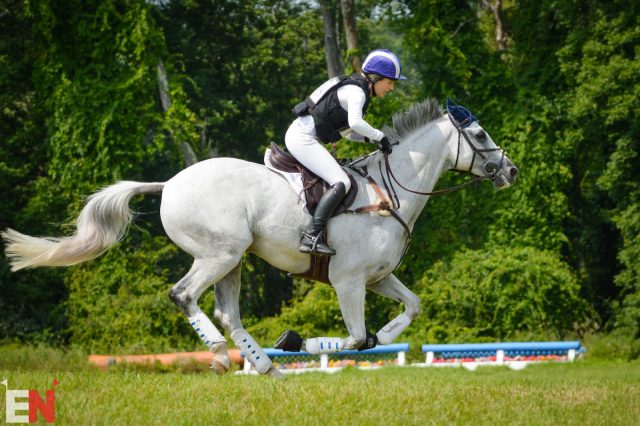 Despite indeed adding some strides in early combinations on course, Holly’s forward riding paid off and helped the 10-year-old Holsteiner gelding to build confidence and get smoother all the way around the track.

Holly’s friend and fellow professional Lillian Heard stepped CharmKing up to the Advanced level late last year while Holly was pregnant with her daughter, Harper, who was born in January. Since then, Holly has gracefully juggled her business of riding, teaching, and coaching alongside the challenges of new motherhood. Thankfully her daughter’s natural affinity for animals and the help of her husband, Eric, make the job a touch easier: “She loves being at the shows and she loves the horses,” Holly said.

Indeed, earlier in the day while Holly was coaching students in the show jumping for the Training divisions, Harper could be seen reaching out from her front-facing carrier strapped to Eric to pat the nearest horse’s nose or dog’s head.

“It’s a little stressful trying to figure out how to manage a kid and ride at the same time, but my husband is so awesome. It’s so nice to have him here. I wouldn’t be able to do it without him helping.” 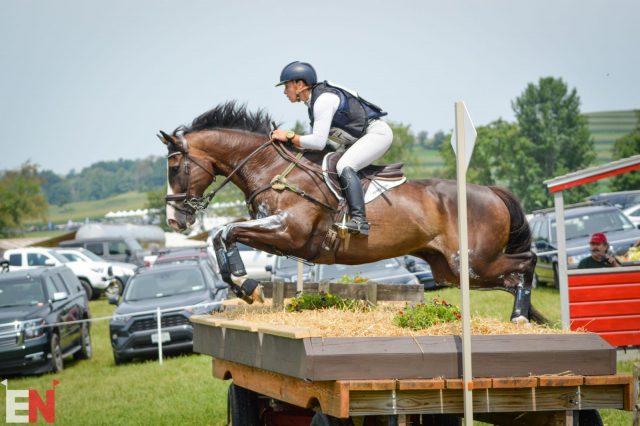 Elizabeth Bortuzzo and Belongs To Teufer. Photo by Abby Powell.

Two new names to the Advanced entry list now sit in second place after cross country: Elizabeth Bortuzzo and 12-year-old off-the-track Thoroughbred Belongs To Teufer, both making their first start at the level. They jumped clear and clocked 1.2 time penalties to sit on a score of 29.1 heading into show jumping.

25-year-old Elizabeth, who operates her own booming business in Pittstown, New Jersey, is as surprised as anyone to be sitting close to the top of the leaderboard after a testing cross country track. Ask her and she’ll tell you that the road to this level with “Teufer” has not been an easy one at all.

“Slowly but surely, we got this pony here,” Elizabeth said. “Actually not surely. Just slowly. It was a rough track to get here.”

“I started him up when he was six years old and he’s had his fair share of hardship. He was not easy to ride. I think he bucked me off at the first dressage show. The first show jumping thing he did he stopped at jump number one. I think the first event he messed it all up. But he’s slowly been learning the ropes and he had a few injuries that were not at all eventing related.”

Their partnership wasn’t one that Elizabeth initially expected either, and it happened a bit by chance when Elizabeth boarded a previous horse at the barn of Thoroughbred racehorse breeder John Arnold Witte.

“I actually met Arnold Witte about two years after [Teufer] came off the track. He was raced until four years old and then he sat in a paddock for two years because he was just tough enough that nobody really wanted to play with him.”

Arrnold asked Elizabeth if she would hop on him one day, which she did, but she was not particularly smitten at first impression. After another couple rides, however, Elizabeth’s mind was changed. She offered to buy Teufer, but Arnold told her he wasn’t for sale. Try as she might to convince him, Arnold refused to sell the horse but he did offer her the ride on him.

“[Arnold] likes all his Thoroughbreds and he’s a fierce supporter of all of them. So I ended up riding a Thoroughbred and I really enjoy him.” 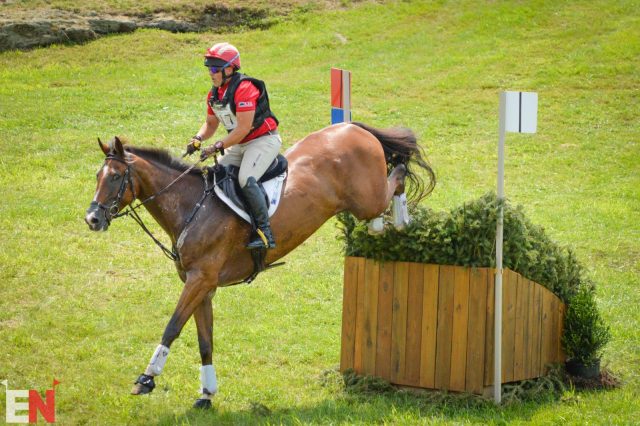 Sitting in third and fourth positions with Erroll Gobey and Jak My Style, respectively, is Buck Davidson. Buck masterfully piloted both horses clearly and quickly — garnering 2 time faults with Erroll and none with Jak — to move them up from the middle of the leaderboard after the dressage with scores of 29.8 and 32.1.

Buck ran both these horses at Kentucky earlier this year. Erroll Gobey, the younger of the two at 11-years-old, was retired on course after a runout so it was fun to see them rock around this course with ease and continue to develop at this level.

Having just completed fist first five-star at Kentucky, Jak My Style also easily stepped back up to the Advanced level after getting back into the swing of competition a few weeks ago by taking his owner, Kat Cuca, around the Beginner Novice at Essex Horse Trials a few weeks ago. 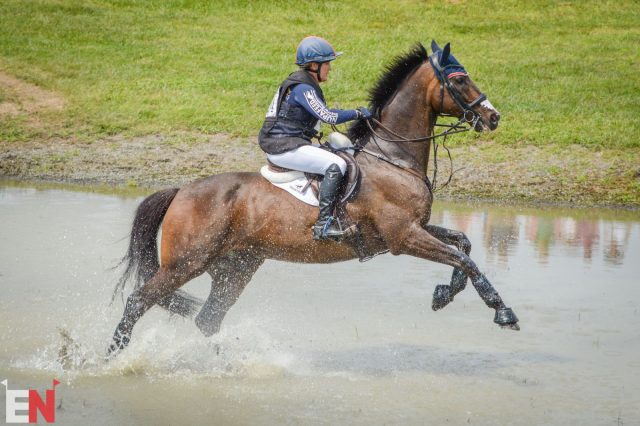 Business Ben and Allison Springer round out the top five with a score of 34.3 after they jumped clear and added 5 time faults to move up the leaderboard from 10th.

This pair is back in business after their weekend at the Kentucky Three-Day Event came to an unfortunate end early on the cross country course. After Kentucky, Alison had the 11-year-old Thoroughbred checked out via bone scan and discovered an aggravated tooth. A CT scan then revealed that the tooth was healthful, but an increase in bone deposits in the region was likely making him uncomfortable. Alison has since had his bit and bridle custom fitted to him, and it has helped immensely.

“The comfort level of his face and all that is huge,” Allison told EN. “He went cross country at Loch Moy and here in a double bridle. The new titanium bits just really comforted him. He loves it. So he’s much more rideable. He’s always gonna be a galloping fool.”

It was really a beautiful day of sport in the rolling hills of Dutchess County, New York. Take a look through the lens of videographer Marion de Vogel and see for yourself!

This week’s coverage is brought to you by Kentucky Performance Products. Collect your free stickers here! 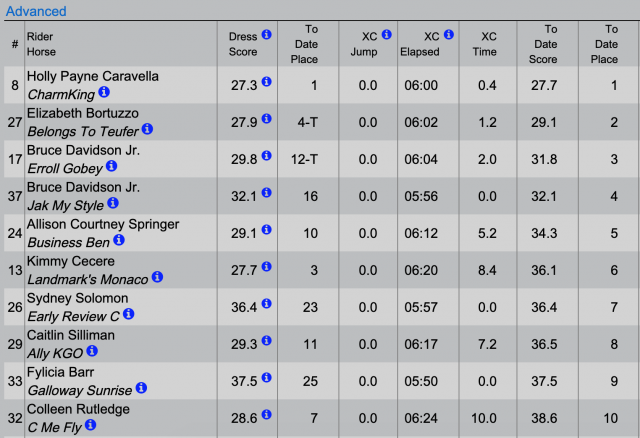