Not only did Holly Payne Caravella make a successful comeback to competition after returning from maternity leave at the Carolina International CCI last month, she stamped her return with an emphatic exclamation point, bringing home the blue ribbon aboard CharmKing LLC’s CharmKing in the Open Intermediate division.

It wasn’t all roses for Holly, however, who faced the devastation of a miscarriage in 2019 before deciding with her husband, Eric, to keep trying for a baby last year. As it would happen, the pandemic-induced shutdown of the 2020 competition season would coincide with Holly’s pregnancy, but as events started back up again, she knew the talented CharmKing needed to get out and get some miles.

Herein lies the crux of complication for many professional women, who in this industry often must choose between pursuing their career and starting a family, putting one on hold in favor of the other. And for the determined women who elect to do both, there are many ends that need tending to in order to keep a business running while pregnant.

Luckily, Holly had a supportive group of clients at home and a close friend she could call on when it came time to send CharmKing to another rider to keep him going: Lillian Heard.

“That’s always a really hard decision, to send a horse to another rider, since there are so many good pros out there,” Holly said. “In talking with Mary Bancroft, who owns Charm with me, we decided we wanted to keep him with a woman so it was a more similar ride. I’ve known Lillian for a long time, and she’s such a quiet, correct rider who I knew wouldn’t change who Charm is – I would get the same horse back.” 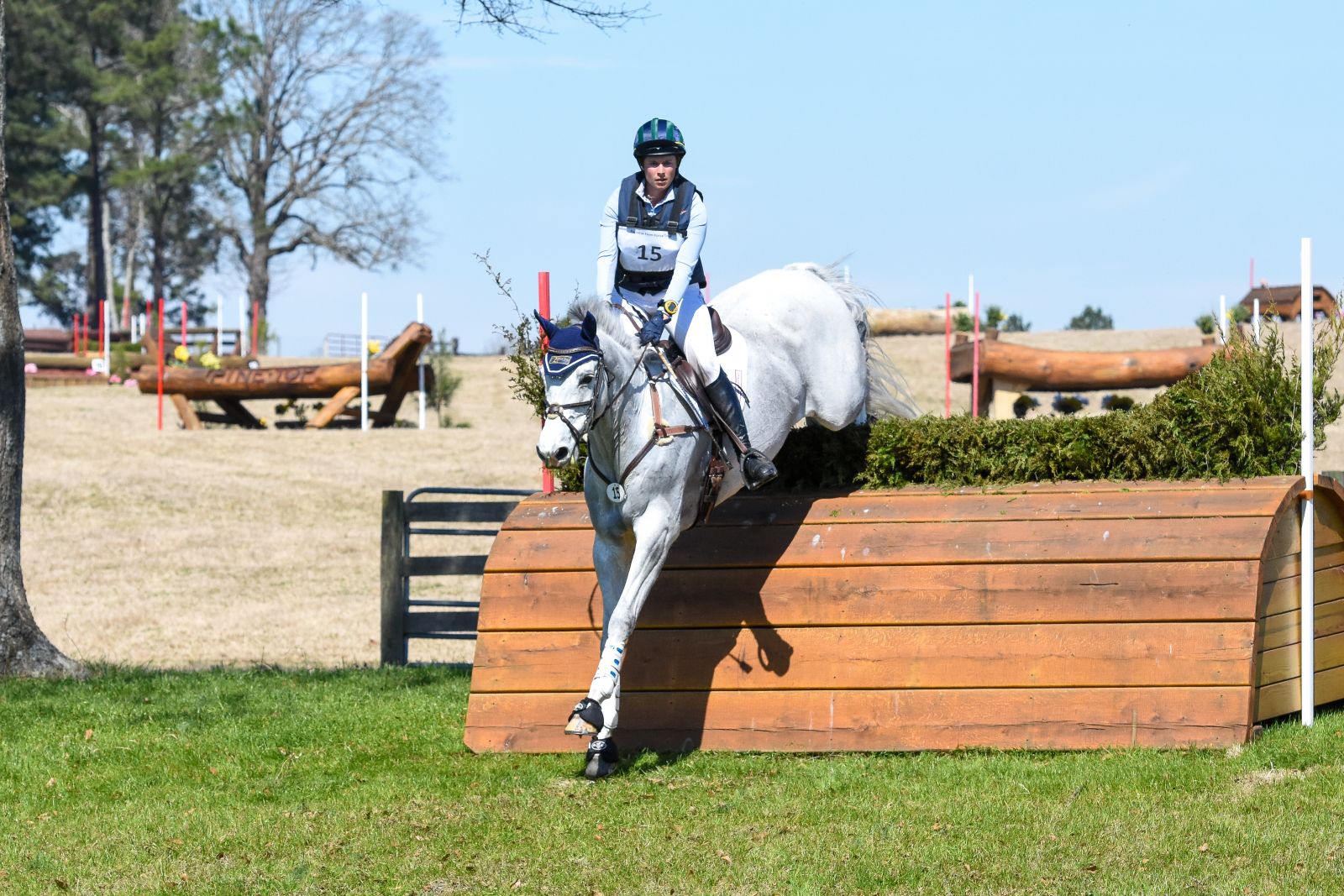 Cross country was the phase the 10-year-old Holsteiner gelding by Cassito out of O-Heraldika needed the most practice with, and Lillian’s prowess in this phase made her an obvious choice to continue to young horse’s tuition. “I knew she would be confident enough, as I know it’s really hard to catch-ride someone else’s horses,” Holly explained.

It would actually be Lillian who would move CharmKing up to the Advanced level, doing so in the CCI4*-S at Great Meadow in August of 2020 – the first international competition post-shutdown – after running two Intermediates. “It was very nerve wracking to be the owner, I have to say!” Holly recalled. “Even though there was no reason to be nervous, I felt responsible. I’d trained him to this point, and I’m telling Lillian he’s good and ready, but at the same time if something had gone wrong, I’d have blamed myself in the training.”

The move up did go to plan, however, and CharmKing would go on to finish in the top 10 at Great Meadow and also in the top 10 in the CCI4*-S at Tryon later in the fall. Meanwhile, back at home, Holly was doing what she could to maintain her fitness and her business as her pregnancy progressed.

In preparation for riding a little less, Holly had sold on the young horses she’d had, keeping only her veteran partner, Never OutFoxed, and her adult amateur client horses on her roster. “It was really useful for me to stay active with ‘Fox’ at home while Charm was getting tuned up,” she recalled. “I rode a lot of really safe horses, a lot of amateur horses, but I was able to stay sharper than if I had taken off completely.” 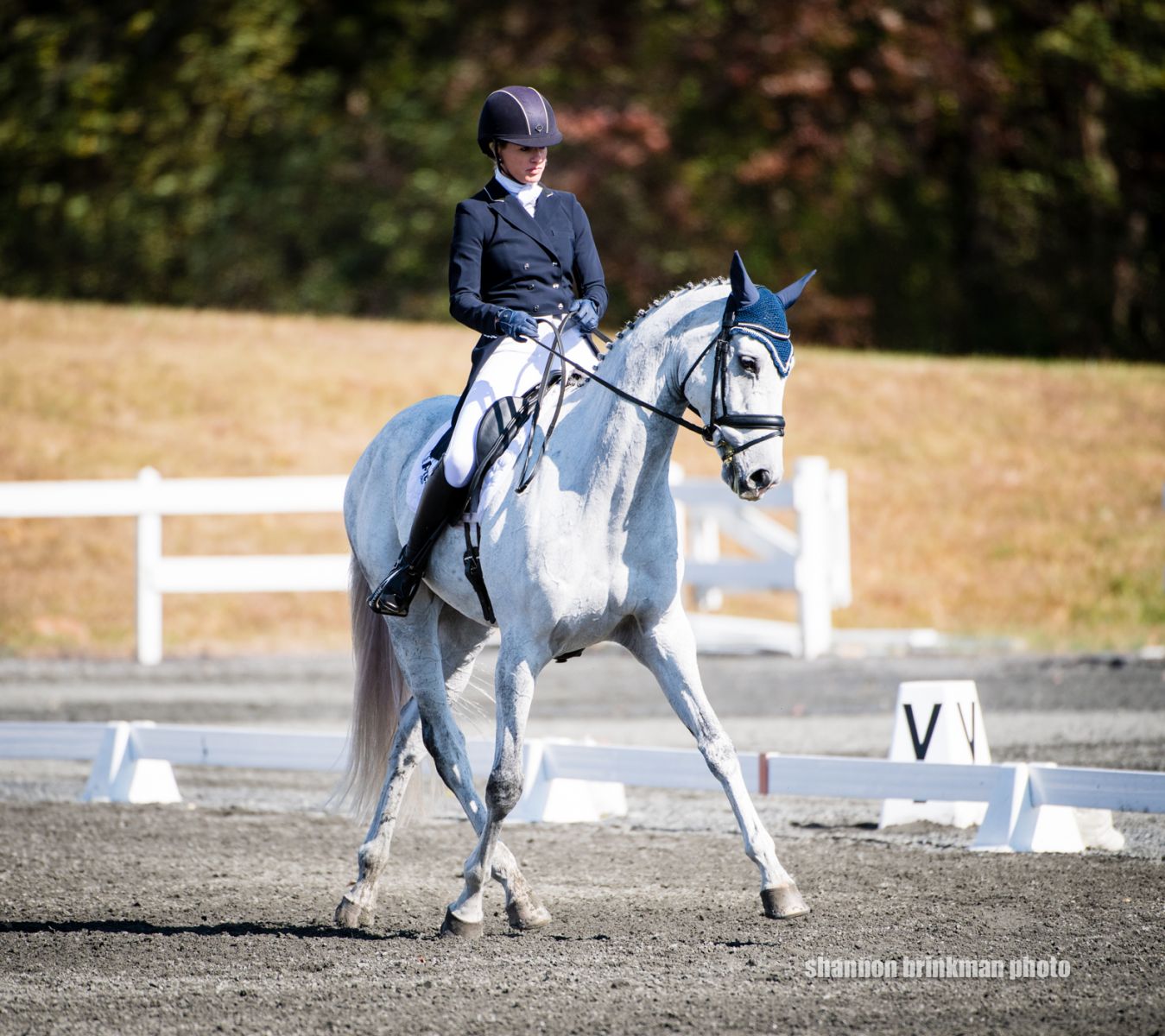 All told, Holly took just four weeks away from the saddle in total, giving birth to beautiful baby Harper Lynn Caravalla on January 7. Once back to riding – “I kind of snapped back into it like riding a bike” – Holly jumped right in. “My clients were eager to have me back, and I wanted to dive right in. It was a good, fast way to get back in shape,” she laughed.

Soon enough, it was time to begin preparing for the new season – and Holly couldn’t wait to get back out there. Lillian had tuned Charm up for Holly, taking the gelding out at Pine top twice in February before turning the reins back over to her friend.

“We packed up the whole family to head to Aiken and went cross country schooling, where Charm just felt great, like the horse I gave her,” Holly said. “He was confident and just felt really good. She kept him prime and ready but ‘my’ horse at the same time.”

It was just the shot of extra confidence Holly needed as she then headed to Carolina to contest the Open Intermediate with both CharmKing and Never Outfoxed. She laughs now as she tells me she’s glad Never OutFoxed was out of the box first – near the beginning of the course the pair had an uncanny, rusty stop and then a near-miss when Holly nearly forgot a jump in show jumping. “I had my rusty moments, but they got taken out on Fox,” she joked.

In the end, it was an easy win for CharmKing, who finished the weekend on his dressage score of 23.0 but perhaps most importantly brought Holly back where she felt the most at home on the same token.