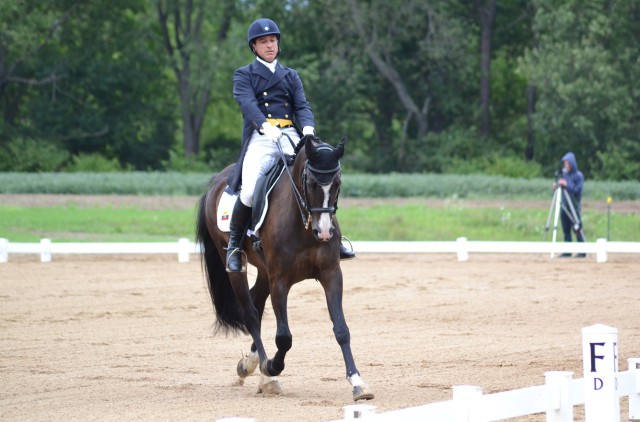 Many of us have thought, or even said aloud, of a special equine partner, “I wish I had three more horses just like this one.” For Ronald Zabala-Goetschel, however, the sentiment was more than a passing thought experiment. Today he is the proud owner of three clones of his own horse of a lifetime, Che Mr. Wiseguy.

The colts, who turned 4 in April, are near carbon copies of their “sire”: dark, athletic powerhouses with super-sized personalities and presence to spare. Wiseguy Too was born first, followed by Wiseguy Two Too and Wiseguy Two Top, all birthed via surrogate mares through Austin, Texas-based ViaGen Inc.

Ronald says it’s been fascinating to watch the colts grow up. In comparison to Che Mr. Wiseguy, who is a gelding, they’re slightly smaller in stature but bulkier, with strongly-crested necks. “The clones are stallions and will stay stallions,” Ronald explains. 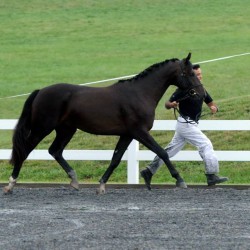 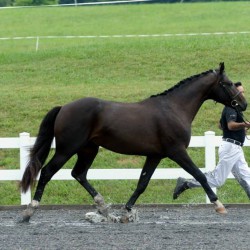 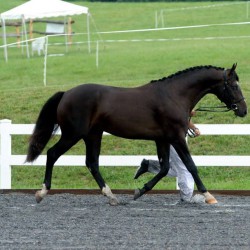 One of the clones has already been bred to Sally Cousin’s four-star horse Tsunami. “We have a surrogate mare carrying their baby,” Ronald says. “We have ‘eight-star’ genes there — four from Wiseguy, four from Tsunami.”

Both Che Mr. Wiseguy and Tsunami were out competing in the Richland CIC3* last weekend: 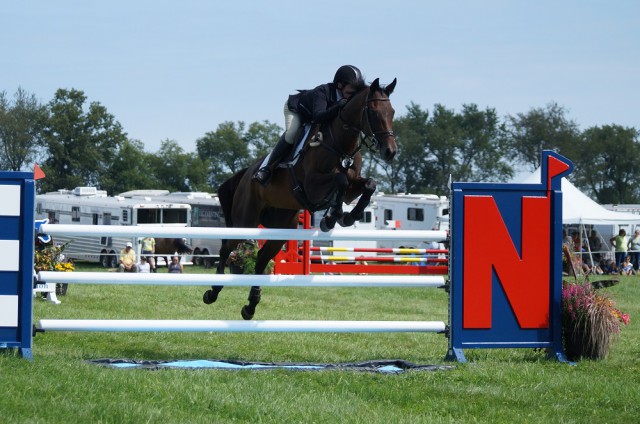 The clones inherited Wiseguy’s coloring, but subtle differences in their white markings make it a little easier to tell them apart. “Their blazes change a little bit,” Ronald says. “I’ve noticed that the babies tend to get the blazes and socks of the surrogate mares carrying them.”

The colts also inherited Wiseguy’s conformation and movement, which was rewarded with top finishes in USEA Future Event Horse 3-year-old division last year. The colts were neck-and-neck at qualifying competitions, with Wiseguy Too and Wiseguy Too Two being named the top two 3-year-old colts at the 2014 USEA FEH Championships at Loch Moy in November.

And then there’s their big personalities and drive. “There is research that suggests clones have no energy, due to the mitochondria they didn’t get from their mom,” Ronald says. “But I’ve never seen horses that age who play like they do. They play all day. It never stops. You see them in the paddocks and they’re always racing each other.” 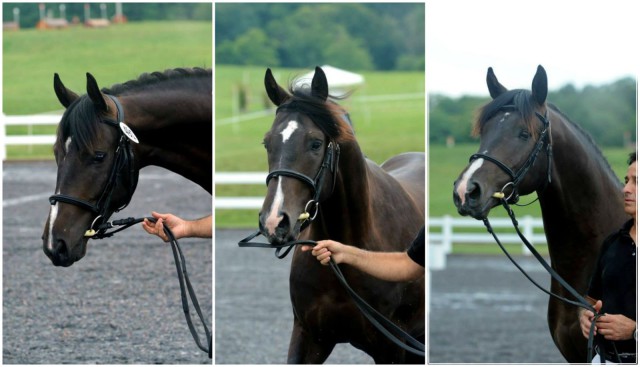 They relish goading the older horses — Wiseguy and Ronald’s 2012 London Olympic partner Master Rose (“Big Boy”) — into duels as well, taunting them from the other side of the fence. “The clones are like, ‘Come on, let’s do it.’ Last year the clone was faster than my Olympic horse.”

Ronald tells the story of one of the clones going up against his old man, Che Mr. Wiseguy: “They were racing each other like crazy, trying to prove who the man was, who was best.” Neither colt nor sire backed down, which came as no surprise to Ronald. “Wiseguy doesn’t have giving up in his system.”

Indeed, the 16-year-old Belgian Warmblood (Jolie—Noblesse) has never had a cross-country stop or runout in his life. They jumped around Rolex in 2009 and bounced back from a near career-ending diagnosis of neck arthritis to resume competing at the three-star level earlier this year. In May they won a CIC3* in Argentina and competed in the CIC3* at Richland Park this weekend, although Ronald scratched him before cross country to save his legs for another day.

Ronald says his Richland dressage test was a bit of an experiment — he tried a double bridle to improve Wiseguy’s flying changes, which it did but at the expense of the test’s overall quality. They followed it up with a clear show jumping round, save a couple time penalties.

Video of the show jumping round courtesy of The Horse Pesterer:

Ronald also competed his new ride Jolliyat, formerly campaigned through the CCI3* level by Caitlin Calder, at Richland in the CCI2*. They picked up 20 in the first water — they took the long route, as the horse is just getting his confidence back after some water issues — and accidentally crossed their tracks. “He was amazingly brave. I was amazingly stupid,” Ronald laughs.

As for who he’ll end up riding at the 2016 Olympics for his native Ecuador, Ronald says the three contenders are Wiseguy, Big Boy and Jolliyat. At the moment, Wiseguy is his top-ranked horse, having won the CIC3* Olympic qualifier in Argentina earlier this year. Rio de Janeiro would be a perfect swan song for their partnership, as Ronald says the horse will be retired after the Olympics whether he competes or not. 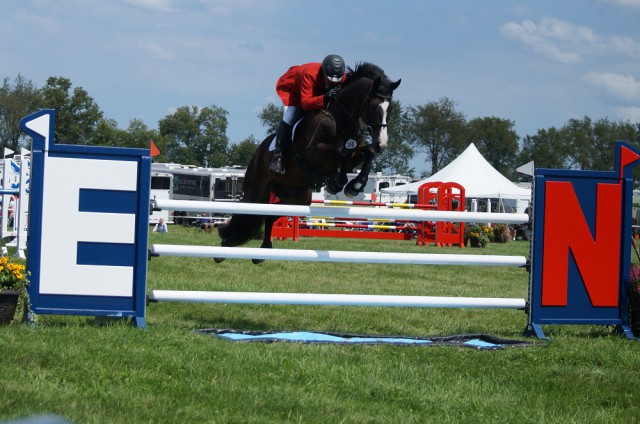 In the meantime, he is doing everything he can to give his beloved horse that opportunity. “He turned 16 in March, and I usually retire them when they’re 16,” Ronald says.

To save wear and tear on Wiseguy’s legs, the horse has something of an unorthodox conditioning program. He is worked six days a week but typically on a walker or in the swimming pool Ronald built especially for Wiseguy. “I only ride him for gallops, and one time for dressage and one time for jumping before a competition,” Ronald explains. “He gets a rider on maybe four or five times a month — that’s it.”

As for a fall CCI3*, Ronald has his sights set on Galway rather than Fair Hill in favor of its milder terrain. “I think Fair Hill would take too much out of him,” he says. 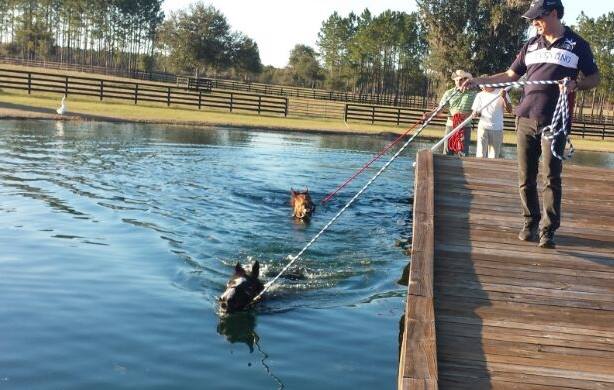 Big Boy taking a lead from Wise Guy in the pool. Photo courtesy of Ronald Zabala.

Mostly, though, Ronald is just savoring every moment in the saddle he gets with Che Mr. Wiseguy: “I’m happy Wiseguy is back, and I could not ask for more. He will tell me what he wants to do.”

In the meantime, Ronald has plenty of other projects to keep him busy, including working with Wiseguy’s clones. While Ronald has started breaking the colts, they’ll be sitting out of the USEA’s Young Event Horse series, aiming instead for some Beginner Novice events next year. “We do everything a year late,” Ronald says. “I think it helps them last longer, mentally and physically.”

In a perfect circle sort of way, it seems fitting that Wiseguy’s eventing career will be winding down just as his clones’ careers are beginning. We wish Ronald and his horses all the best in their preparations for the Olympic Games, and we’ll be keeping a close eye on Wiseguy’s clones for the future!