By all accounts last weekend’s Blue Ridge Mountain H.T. at Tryon International Equestrian Center was a success, with 150 entries from Beginner Novice through Advanced contesting the inaugural event. In addition to the world class venue’s usual amenities — super footing, beautiful stabling, a big-time atmosphere — all the levels were invited to 2018 WEG cross country venue, the White Oak Course, which featured seven tracks designed by Captain Mark Phillips and built by ETB Equine Construction.

Earlier this week we shared a quick results recap; today we follow up with interviews with the winners of the Advanced, Intermediate and Prelim divisions. 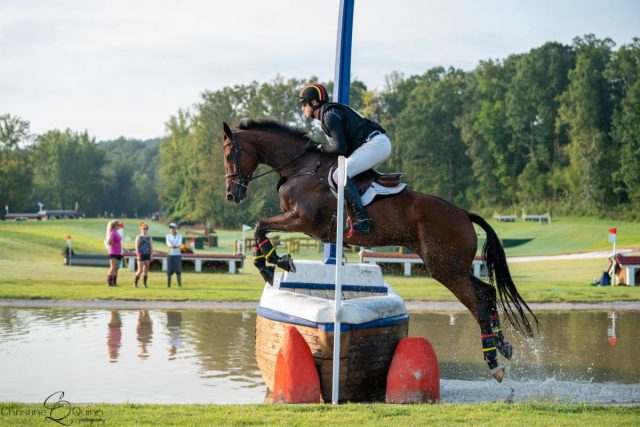 In the Advanced, Doug Payne piloted Quantum Leap to the win on a final score of 40.6. Allison Springer and Sapphire Blue B, a 2010 Irish Sport Horse gelding (Heritage Fortunus x Lucy Blue) owned by Katie Lichten, finished second on 51.7, while Ema Klugman and Bendigo, a 2002 Trakehner gelding owned by Jeni Klugman, took third on 52.4.

Doug’s ride, Quantum, made his Advanced level debut earlier this year at Pine Top and has since tackled a handful of CCI4*-S events. “He is an eight-year-old and still greenish to the level for sure — he has probably five events under his belt at this point,” Payne said of the 2011 Zweibrucker gelding (Quite Capitol x Report to Sloopy), co-owned with his wife, Jessica Payne and Susan Drillock.

The pair was third after dressage on 28.6, then turned in a fault-free show jumping round and the fastest cross country round of the day. Doug picked up 12 time, but nobody got closer to beating the clock and it was enough to move them into the lead.

Of his cross country strategy, Doug explained, “I wasn’t looking to going crazy fast, but he’s a very efficient and good galloping horse, so he just covers the ground so well. I’m very, very lucky to have such a talented and willing horse to go with. He goes in a rubber snaffle, and you barely have to touch him.”

Doug commended the course design to accommodate multiple courses on one footprint. “Initially I was thinking [the course] might get real busy, but there is enough space here that it’s quite good,” Doug said. “The course was wonderful. I think the footing couldn’t have been any better. It was a good, flowing course, and I think the whole competition has been excellent.” 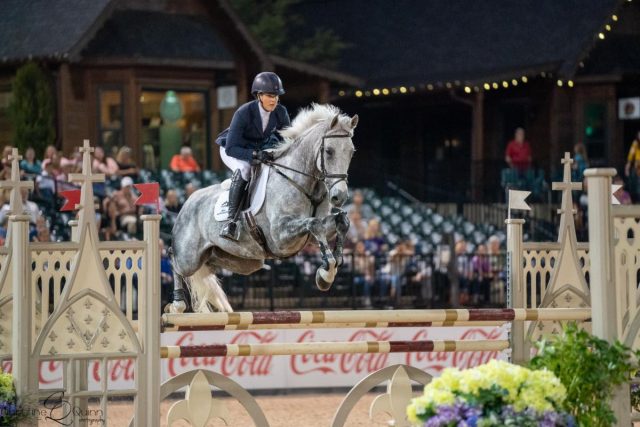 After turning in a clear show jumping round with 0.4 time on Saturday night under the lights in Tryon Stadium, Allison and Sapphire Blue B were still leading on their dressage score of 27.7.  They picked up 23.6 time cross country to ultimately finish second.

“He is my student Katie Lichten’s horse,” Springer said. “We call him Steve in the barn — he’s a unicorn. He’s young, and was definitely spooky in there but he jumped great. He’s a talented young horse, and I feel really honored to be able to ride him for Katie.”

The cross country clock made all the difference in the Intermediate division as well, with Lucienne Elms and her own Mistralou posting the fastest round to move from 8th after dressage into the top spot on 46.4. Second place went to Annie Goodwin and Mettraise, owned by Jeanne Sylvester, on a score of 52.5, while John Michael Durr finishing just behind in third on 52.6 with Becky Brown’s Tilikum. 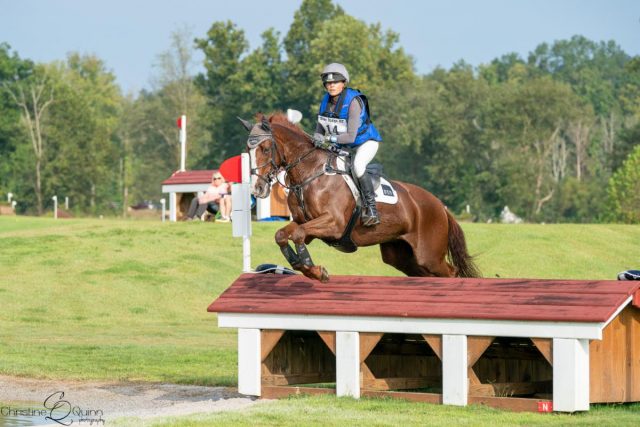 “It was a fantastic course design; Mark Phillips is ever the master,” Lucienne said. “[The course] rode really well, there were plenty of questions, with all combinations rewarding to just keep a forward rhythm, too.”

Although Lucienne just started competing again after sustaining injuries in late 2018, her determination to be competitive hasn’t wavered. “I wanted a strong result,” she said. “Mistralou is not green, so I intended to set out for the time. He is a full-blood horse and always a pleasure to finish on [since] he just keeps galloping, so I was confident I would be competitive providing the time wasn’t easy to attain.”

Lucienne hopes to return Mistralou to 4*-L competition later this year and looks forward to returning to TIEC in 2020: “TIEC really is a world-class venue: the cross country venue has the best ground you could ask for, the show jumping gives great mileage to the horses prepping for an international run, as the main arena really creates an educational atmosphere for both horse and rider requiring the exposure, and the footing for dressage is immaculate with plenty of space to work in.” 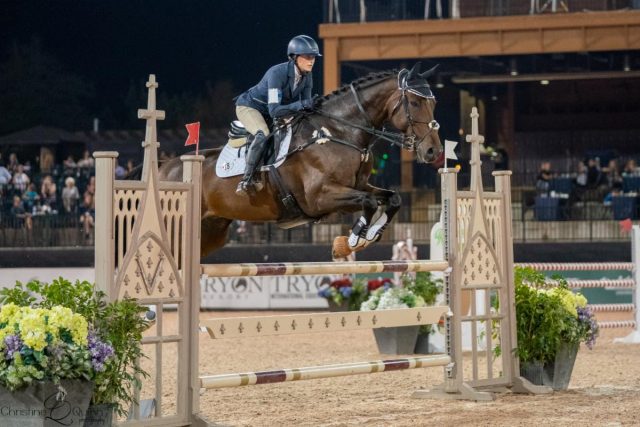 Kimberly Durr (née Steinbuch) and PDQ Leigh, owned by Jil Walton, led the pack Saturday after scoring a 29.3 to lead the dressage phase and producing a fault-free show jumping round. They dropped to 4th after collected 24.4 time faults cross country. “He’s very new to me — I’ve had him for just over two and a half weeks,” Kimmy admitted. “I’m very excited about him and looking forward to a very good partnership.”

Kimmy shared that the course set by course designer Chris Barnard was her first show jumping round “under the lights,” and only her second show jumping round with PDQ Leigh. “It was a little back-and-forth and a little discussionary, but he knows his job is just to leave all of the rails in the cups,” she said.

Kimmy is not used to riding a horse of PDQ Leigh’s size and said that it could be a challenging dynamic on cross country: “He’s definitely over 17 hands, so it’s very different for me to have a horse his size to try and ride around, but he’s pretty straightforward and he knows his job.”

Kimmy and her husband, John Michael Durr, operate out of Shelby, North Carolina, which allows them to compete at TIEC as often as they wish, she said. “We’re here two to three weeks a month, so we basically live here. We do all the jumpers and hunters here, and then we do eventing on the weekends. It’s nice to be centrally located.” 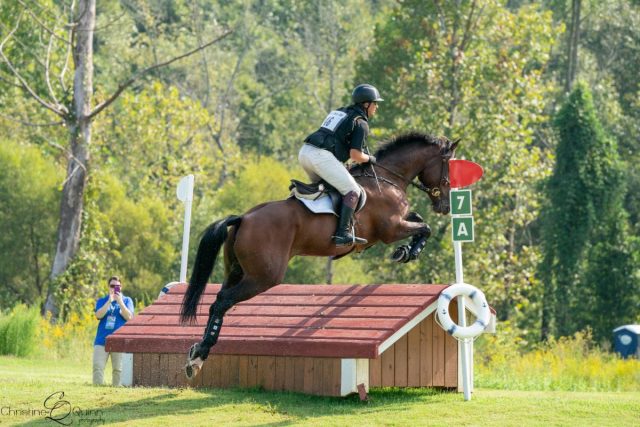 “The course rode really well,” John Michael said. “Mark [Phillips] did an amazing job; even though there were a lot of courses it felt like the horses were never confused about where they were going. It was really well done. There were several different tracks, and he nailed it.”

He explained that he has been working on giving Casofino “consistent miles and education” before turning the reins back over to his adult-amateur owner, who is also Durr’s student. “He’s a really exciting young horse. He just needed a little making up to win with his adult amateur,” he said. “This was the first time he had been in a ring like this under the lights. His heart was going a million miles a minute and he saw every kid rolling down the grass, but he focused on the jumps and did his job.” 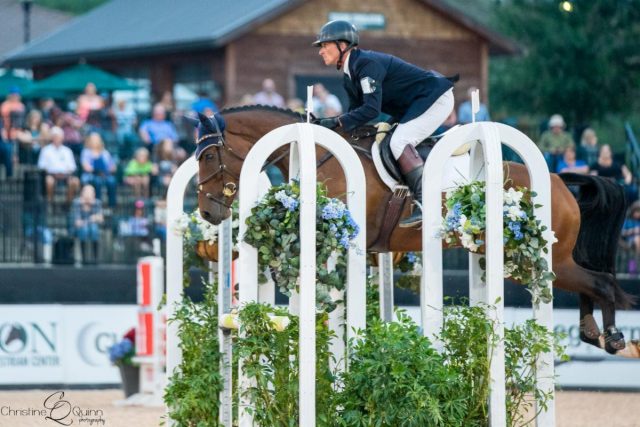 He concluded, “Every part of what Tryon does makes you feel special — it doesn’t matter whether you’re there for a national horse trials, a B-rated Hunter/Jumper show, or the 5* week. Tryon gives you that championship feeling all the time, so when my students do go to the championships or go to Young Riders or something like that, they don’t fall apart, because they’re used to being in a big atmosphere.”

Congrats to all the event’s winners!