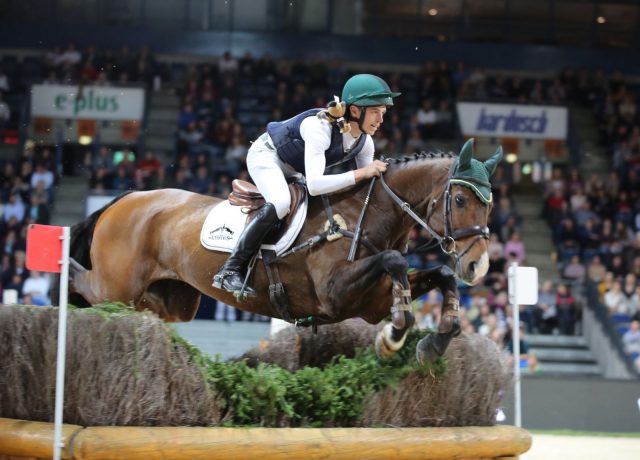 For those poor, unfortunate souls who don’t have access to an Ocala to escape to – that’ll be all of us on this side of the pond, then – there’s got to be something to fill the drudgery of the grey and soggy winter months.

Cue indoor eventing, the fast-paced, Europop-fuelled, boozy and enthusiastic little brother to the sport proper, which takes a plethora of familiar faces into the heart of some of Europe’s most prestigious indoor horse shows. Though it’s a decidedly Eurocentric undertaking, the indoor eventing season got off to a rip-roaring start in Canada, with the Horseware Indoor Eventing Challenge at the Royal Winter Fair going to Karl Slezak and Fernhill Wishes.

Yesterday, though, it was back to Bratwurstier climes, as indoor eventing took to the floor at the Stuttgart German Masters. 19 horse-and-rider combinations from seven countries came forward to tackle the course, made up of two parts: the first, a twisting, turning accuracy challenge over 17 solid fences, and the second, a quickfire timed figure-of-eight over showjumps. For every fence knocked, three seconds would be added to a competitor’s time – but competitors would have to finish the first section of the course within the optimum time of 98 seconds to be allowed to put the pedal to the metal and ride for the chance to take top honours.

And thus commenced an hour of frenetic fun, with a packed house of enthusiastic spectators clapping and cheering each competitor around the whirlwind track, designed by Rüdiger Rau. It quickly became apparent that one fence in particular would be the bogey of the evening: the final showjump at 23, a substantially-filled upright at the end of a long gallop, fell and fell and fell some more. 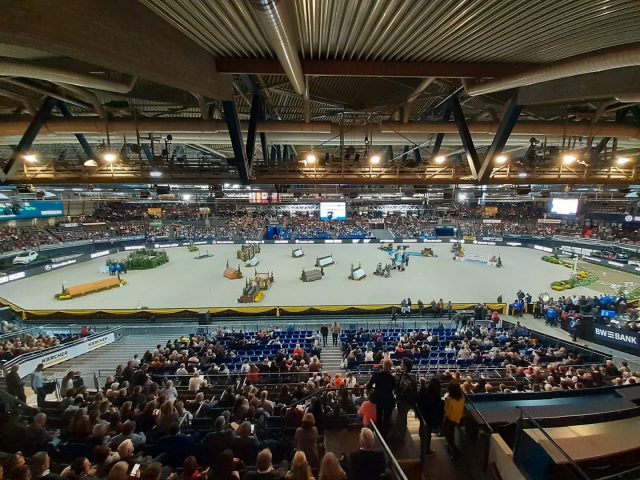 This allowed Spain’s Esteban Benitez Valle and his diminutive firecracker Milana 23 to hold the lead for much of the class after their ferociously quick one-pole round set the tone as the second in the order of go. Though he would ultimately have to settle for fifth place after a hot batch of late riders, his little mare certainly earned the unofficial EN award for the horse we’d most like to smuggle home in our carry-on.

The winner would only end up 0.19 seconds faster than the Spaniard, but that three-second penalty proved costly – and Ireland’s Cathal Daniels, well-known for his inimitable ability to pair speed with precision, edged the victory with fourteen-year-old Alcatraz, a catch-ride borrowed from Oliver Townend and owner Sarah Hughes for the competition. Previously piloted by Great Britain’s Alex Bragg (and a handful of Americans as well, including Ryan Wood, Phillip Dutton, and Allison Springer), the KWPN gelding (Cartier van de Heffinck x Imperatrice, by VDL Corland) won last year’s Paris class, and is proving something of a specialist in these buzzy, close competitions.

Despite opting for a slightly wider turn onto the final gallop down to that fickle final fence, the 23-year-old European bronze medalist stopped the clock on 36.65 seconds, perhaps spurred on by the nostalgic overtones of…Crazy Frog? We don’t know what they’re feeding these German arena DJs, but we’d quite like some, actually. 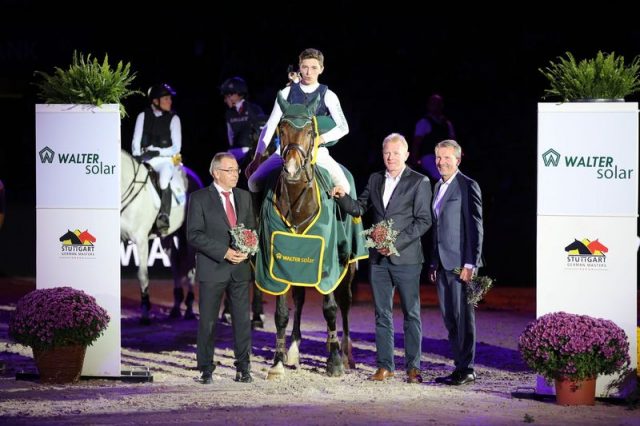 It would be an Irish one-two, after final rider Padraig McCarthy would cross the finish line less than a third of a second slower than Cathal, riding his 2018 Geneva indoor eventing victor Rosemaber Lancuest. Ingrid Klimke would lead the way for the home side, finishing third on her 2016 Seven-Year-Old World Champion Weisse Düne, who gained some experience in this type of novelty class when joining in with Aachen’s infamous Ride and Drive this summer. They clocked in at 38.47 seconds, while fourth-placed Laura Collett and Cooley Again – rather charmingly referred to as ‘Nostrils’ – would finish up on 39.80 seconds, and €2,000 the richer.

One might suspect, though, that drinks were on Cathal, whose catch-ride was sweetened by the prospect of being able to keep all his prize money – a not insubstantial €10,000. Ever the competitor, he could be found rigorously tackling a pull-up challenge in the stables before making his merry way to the bar. Shots for nailing all the shots? We certainly hope so.

The next leg of the hotly-contested European indoor eventing circuit takes place at the Sweden International Horse Show in Stockholm on Thursday, the 28th November. After that, we’ll be heading to Paris for the Salon du Cheval on Saturday, the 7th of December, and swiftly onwards to Switzerland’s CHI Geneva, where the indoor eventing will take place on Friday, the 13th of December.