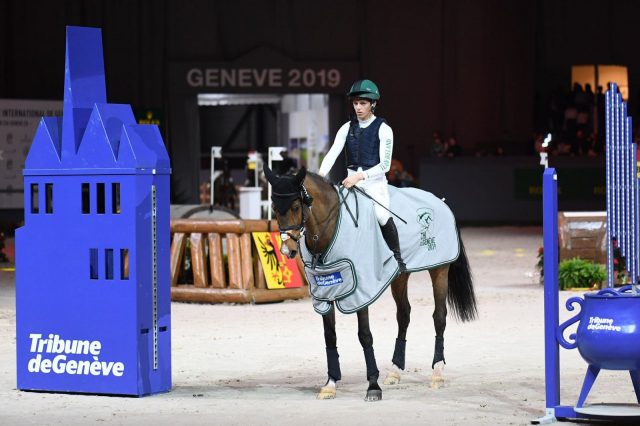 For much of the evening, it looked like a sure thing for Ireland — but the top spot wasn’t held by Cathal, who was to be the penultimate rider in the ring. Instead, it was second to go Padraig McCarthy, who rode an authoritative and economical round aboard last year’s winner, Tatiana Brent’s Rosemaber Lancuest, to a blazing time of 166.08, just seven seconds over the optimum time. The pair would be unsurpassable for most of the class, which featured sixteen quality horse-and-rider combinations — though several would give him a run for his money.

The Swiss team, who narrowly scooped their ticket to Tokyo at Boekelo in October, were out in force, proving that the influence of team trainer Andrew Nicholson is nothing to be sniffed at. Tiziana Realini and Toubleau du Rueire, best of the Swiss at the Dutch showcase event, added ten seconds to the optimum time to finish just behind Padraig, while up-and-comer Robin Godel and Grandeur de Lully CH once again belied the rider’s 21 years to execute a swift and professional performance. Though Robin, who represented Switzerland at the 2018 World Equestrian Games, the 2019 European Championships, and at several Nations Cups this year, would stop the clock at just over 162 seconds, a dislodged MIM clip at fence 25 added a further eight seconds to his time, shunting him just below teammate Tiziana in the standings. Nevertheless, if we’re going to use this winter’s indoor cross-country classes as educational viewing — and why shouldn’t we? — Robin’s round is certainly one to watch. Like trainer Andrew Nicholson, the young rider is proving that speed done well doesn’t necessarily look speedy – at its best, it can look buttery smooth and extraordinarily calculated.

Once again, leading Dutch rider Tim Lips brought forward seven-year-old Herby, who was so impressive at Le Lion d’Angers before his unfortunate early withdrawal at the final horse inspection. After a solid result at Paris’ indoor cross-country, the huge-striding Dutch-bred gelding, who also competes at the lower levels with his owner, produced the goods yet again to add eleven seconds to the optimum time and ultimately finish sixth. Our tip? Keep a very close eye on this horse in the 2020 season.

But as competitive rounds kept on coming, Padraig’s grasp on the title was unshaken — until the tail end of the class, that is. Exultant after victory at Stuttgart, Cathal Daniels proved his fledgling partnership with Sarah Hughes’ Alcatraz, ordinarily ridden by Oliver Townend, is a formidable one.

It was apparent from the off that Cathal had come here with one goal in mind, but his job wasn’t necessarily set to be an easy one. Green efforts over the first handful of fences cost the pair valuable seconds on the clock, which meant that Cathal couldn’t afford to waste any time turning between fences. By the time the pair met the ninth fence, which ushered them through the chute into Geneva’s close-quartered warm-up arena, Alcatraz had joined the party. The remainder of their round, which saw them tackle angled hedges, an airy, knockable barrel fence, and a series of MIM-enabled solid obstacles, gained in speed and conviction, and as they crossed the finish line, they were just three-and-a-half seconds over the 160-second optimum time, putting them on a final score of 164.

But it wasn’t over, and Cathal wouldn’t quite be able to celebrate yet. Last in the ring was to be popular Frenchman Karim Florent Laghouag, riding double-Europeans mount, former Geneva indoor cross-country victor, and last week’s Paris champion Punch de l’Esques. Unlike Cathal and Alcatraz, Karim and the enormously experienced gelding never lost a second, producing an electric start and turning almost telepathically throughout the course to deliver the only clear round under the optimum time, finishing on 154 seconds. But woe betide those who don’t keep a close eye on the time – or indeed, on the rulebook. Unlike regular cross-country, in which there’s a healthy window you can sit in below the optimum time, indoor cross-country requires you to attempt exactitude. Romping home six seconds below the time earned the French duo six penalties, and they were relegated to second place behind Cathal and Alcatraz.

The Geneva indoor cross-country class takes us into a holiday break in the action, which will resume on December 30th at the Liverpool International Horse Show in the United Kingdom. We’ll be bringing you all the action from the class — stay tuned! In the meantime, you can rewatch Geneva’s class in full here, or click here to watch individual rounds.