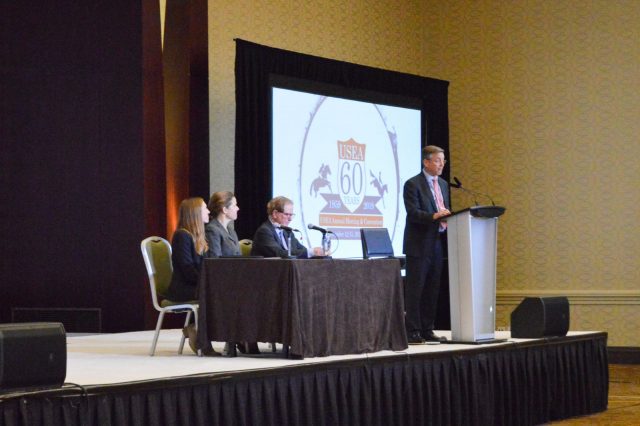 The keynote address is always a highlight of the USEA Annual Meeting & Convention. And this year’s address had a unique twist: not just one, but three speakers presenting, each from a different chronological perspective of the sport.

Jim Wolf introduced the speakers — Jimmy Wofford, Max Corcoran and Woodge Fulton — as the “ghosts of of eventing past, present and future.” The theme is a fitting one for the USEA’s 60th anniversary here in its birthplace of Boston, as we collectively celebrate the sport’s past, consider its present, and ponder its future. 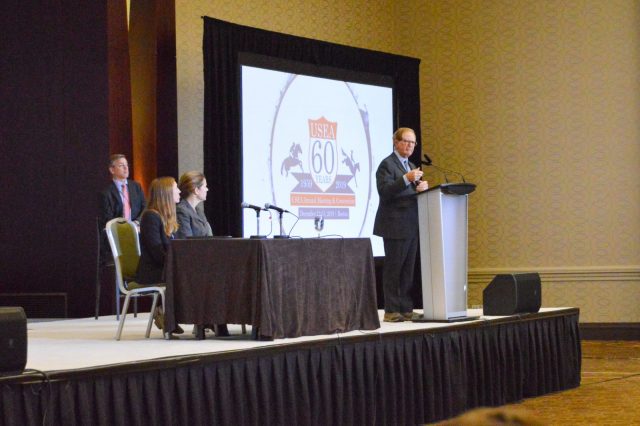 Jimmy Wofford is a historian of the sport and nothing short of legend himself. For the address, he started by taking us all the way back to the first equestrian Olympics, in 684 BC. “I did not participate,” he said dryly, setting the tone for a history lesson that was as educational as it was entertaining. He pointed out an interesting, and perhaps topical to modern day, fun fact about those early Games — the owners, rather than the drivers, of the chariots received the medals.

But, he said, for our purposes eventing began in 1912, when the first “military” Olympics were held in Stockholm, Sweden. Several countries (Belgium, Denmark, France, Great Britain, Norway and the U.S.) had several riders and horses used in two or even all three disciplines. Among them: Team USA’s Guy Henry, who contested dressage, show jumping and eventing, winning team bronze in the latter.

By 1924, Jimmy explained, eventing had settled on the classic format as we know it, with a five-part endurance phase. “The speeds and distances established in 1924 remain today,” he notes. “Other variables have changed, but that part has not changed.”

The first civilian Olympics took place in 1952, and that year the U.S. team saw a sea change shift from military riders to civilians. Trivia fact: The average age of the horse was 7, and the average age of the rider was 20. “I would have liked to have seen them try to control that bunch,” Jimmy chuckled. “Erik Duvander could take notes.”

He referred to the era that followed as the “fox hunting period.” The Duke of Beaufort established the first Badminton Horse Trials on his British estate in 1949, having watched the 1947 Olympics and thinking “what a lovely education for a fox hunter.” Another landmark of that time was the 1964 Olympics, which saw the first lady eventer compete. “That is probably one of the most important dates in our history,” he said, and circled back to this another time or two in his presentation. Thank you for your feminism, Jimmy!

Fast forward to the 1984 Olympics, the beginning of yet another  for eventing — and also, notably, the year Karen Stives won individual silver, the first woman to medal in eventing. The IOC declared equestrian no longer limited to amateurs, opening the door to a new era Jimmy called “the professional era,” which saw the rise of sponsorship into our sport.

Eventing shape-shifted once again in 2004, when we went to the short format “for reasons that have been endlessly debated,” said Jimmy. “From that date, we entered the era of the technician,” he said, pointing to the rise of athletes who have since elevated riding and eventing to an entirely new level of technique.

“What will we call the next period?” Jimmy asked in closing. “I don’t know. That’s up to you guys.”

The question was later asked of Jimmy to identify what parts of the sport’s past we want to make sure we don’t lose moving forward. His answer was immediate: “The horse.”

In an era of increasing mechanization, he said, we still as human need contact with the natural world. For those of us who are passionate about horses, we find some psychic connection with the natural world through horses. Sitting on 1,000 pounds going 20 miles an hour … you’re just not going to get that from a hamster, he chuckled.

He cautioned that in an era of increasing mechanization and mind-boggling technological advances, we keep the horse at the forefront. “Machines are training our horses,” he said. “There is a place for machinery in the horse world, but there’s still a place for connection between horse and rider.”

He noted eventing’s amazing ability to reinvent itself over and over again, to adapt to a changing world. But our horses remain the same animals they were 100, or 1,000 years ago. “We should be confident about our ability to [continue adapting] in the future, so long as we remember to take our partner with us.” 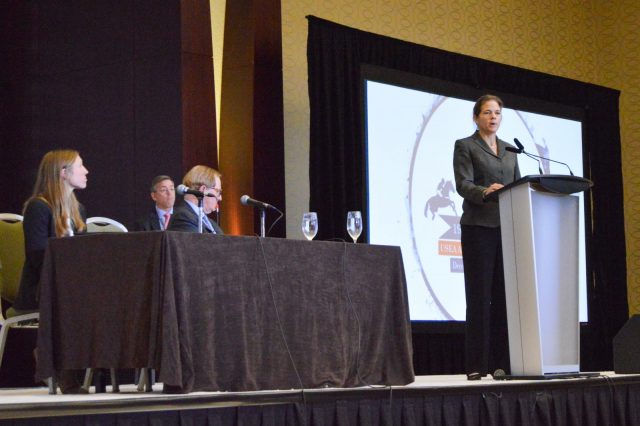 Next up to the podium was Max Corcoran, who has worn so many hats in our sport from supergroom to organizer and, now, newly elected USEA President.

By now, she said, the USEA is a healthy and thriving organization, pointing out its myriad programs that make our sport welcoming to a diverse demographic ranging from college students to adult amateurs. She noted promising new developments in safety, ownership and syndication as opportunities for involvement, platforms like ERA of NA that are helping to leverage the voice of riders, and the excitement surrounding the debut of a second North American five-star at Fair Hill next fall. Worldwide, too, the sport is evolving: there’s arena eventing, a dramatic change in the Olympic format, and a sweeping technology-driven globalization of the sport that is bringing eventers around the world closer together.

“We have the ability to watch events all over the internet,” she said. “With the click of a button, four hours of your morning are gone to watching Burghley.”

We have new technology in our barns, too, much of it to positive effect. It can help us stay safer, keep our horses sounder, and provide a way to quantify our conditioning. We live in an increasingly fast-paced world, and the demand on athletes to deliver results on a timeline can be intense. But Max cautioned that technology isn’t a shortcut: “It can increase the quality of our training, but it cannot increase the speed … Horses and ‘now’ don’t always mix. To quote Kim Severson, ‘If we don’t slow down, our horses will do it for us.'”

“Horsemanship has been lost in the modern day,” she further observed. There’s not enough time being spent in the saddle. The conditioning piece has been diluted, despite valiant attempts to educate and honor its importance via the USEA’s classic series format. It’s not enough to go to a lesson, pay your money, ride circles for an hour and go home. We need coaches — mentors — who take into account the bigger, more holistic picture: how does the horse look, how does he feel, what are the athlete’s short- and long-term goals. “We need to be willing to learn from the ground up,” Max said. 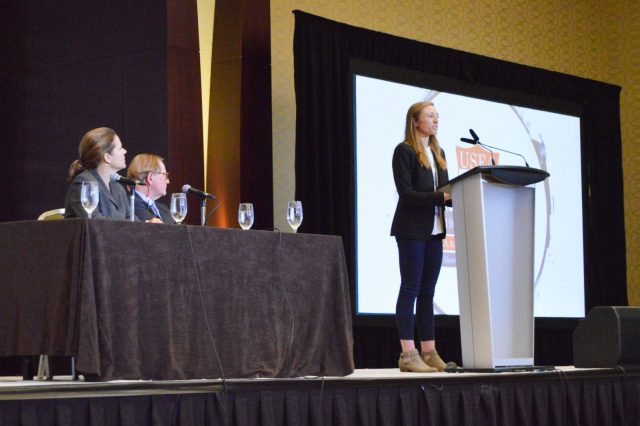 Rounding out the address was Woodge Fulton, on the topic of the sport’s future. She’s one of our country’s brightest young eventing stars, having jumped clear around four out of five five-stars she has contested with her great partner Captain Jack. She spent a great deal of 2019 in Germany, training with Dirk Schrade and testing her mettle against Badminton and Burghley, where she was the youngest entry this year. Woodge has come by her success honestly, through elbow grease, grit and, above all, a commitment to do right by her horse.

Looking around at our sport, and ahead to its future, she expresses some concerns. Eventing has been forced to diversity — the term now encapsulates everything from five-stars to showcases to tadpole divisions — and she worries that the heart of the sport could get lost in the mix: “I would hate to see these [showcase events] become the new Olympic format.” Land is a precious commodity, and the cost to maintain it is high. She acknowledges that we need to figure out how to breed and produce our own horses, so that we aren’t just buying Europe’s leftovers. She doesn’t like the trend of training on perfectly manicured “fake” footing, which doesn’t prepare horses to contend with imperfect conditions on course. “We’re on a slippery slope to becoming dressage queens about perfect footing,” she says. Like Jimmy and Max before her, she issued a reminder that our horses’ welfare must always come first.

Competition expenses are growing, both for competitors and organizers. Woodge identifies that growing cost as one of the biggest threats to our sport. “We have to keep it to where the average person can participate,” she says, noting that eventing’s culture of inclusiveness has always been one of its biggest draws. In eventing it’s still possible to take a free OTTB to the top of the sport, but that affordability may be in danger. Woodge knows this all too well, having recently put her five-star partner — whom she also calls her best friend — on the market. The harsh reality is that it going to take money to develop her next prospect. “The balance is what you’re willing to sacrifice,” she says.

Woodge looks around at her peers and notices a decline in their willingness to put in the day-in and day-out work: “It isn’t a glamorous life, but there is a difference between being a paying student and being a working student.” She sees riders flying back and forth to meet their horses at competitions, and says that it’s doing more harm that good.

For all her concerns, though, Woodge expresses hope — and reminds us that we have agency. We all have a part to play in helping to shape the sport’s future into what WE want it to be.

“You don’t need to make a list or a team or wear a jacket with USA across the back to represent your country,” she says. “No matter your role in this sport, work to redefine your very best. We can’t plan the future, but if we are all working hard for the same team, we can create the future we want.”