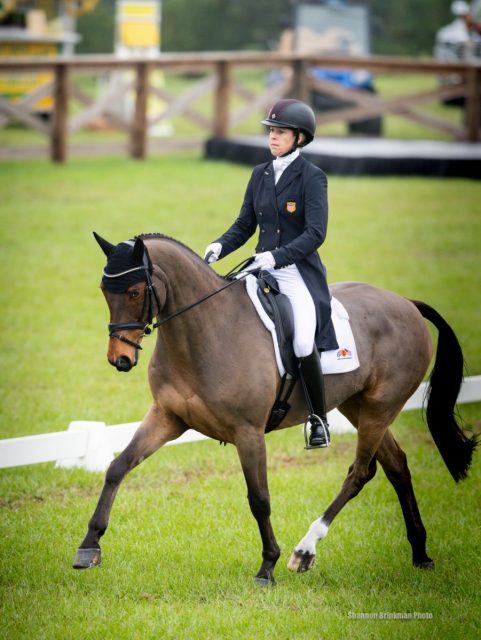 Mara DePuy and Congo Brazzaville C got off to a blazing start at Fair Hill last month, snatching the dressage lead and enjoying the cross country run of their lives before taking an unlucky dunking at the final water. Mara figured that was that for the year, but Congo had other ideas.

After Fair Hill, Mara says, “My horse had about 10 days completely off. What made the decision was that he was squealing and running around his field and normally Congo would be having naps after a hard event. So he definitely was not ready to be done.”

Between Congo’s behavior, consulting with her team, and a cross country school with Phillip Dutton, all signs pointed to a redemption mission in Ocala: “I put him back into hacking and hacked and flatted for a week, did one cross country school, one gallop, and here we are.”

“Phillip is an advisor of mine, we talked about it — I’m the one who kind of threw it out there,” she says. “He just basically suggested that I need more practice going fast, which is true, but I need practice going fast in competition. And the fact that my horse came out of it so well — if at any point he told me he was tired or sore or whatever after Fair Hill, I would have waited until next year.”

In our “By the Numbers” Ocala Jockey Club preview, we noted that, despite leading the pack at Fair Hill after the first phase on a 28.5, this pair had yet to score in the twenties at two consecutive events despite breaking that mark in 30% of their starts over the last two years. That stat no longer applies after their test today at Ocala Jockey Club, where they scored a 28.6 to take the CCI4*-L dressage lead.

Of their performance, with her own and David and Mary Regamey’s 12-year-old Dutch gelding (Tangelo Van De Zuuthoeve x Mexico M, by Highline), Mara says, “The test was good enough — I still think it can always be better. My horse was good, he didn’t do anything wrong, I just didn’t feel like he was quite as through maybe as he was at Fair Hill. But still, very correct and still good.”

Looking ahead to tomorrow’s cross country test, Mara reflects, “This venue is amazing. I’ve never been to this event before, and it’s so not typical what you’d think of Florida. The land is amazing and it’s a proper, proper four-star — there’s certainly enough to do. Obviously it’s a good course, there are fair questions, I think there’s a lot to do out there, and it’s even a little bit longer than Fair Hill. The ground is perfect of course too.”

As for her game plan, she says, “I didn’t come down here just to canter around. I need to think about what the horse can do and how he feels, but I’ll give it a shot.” 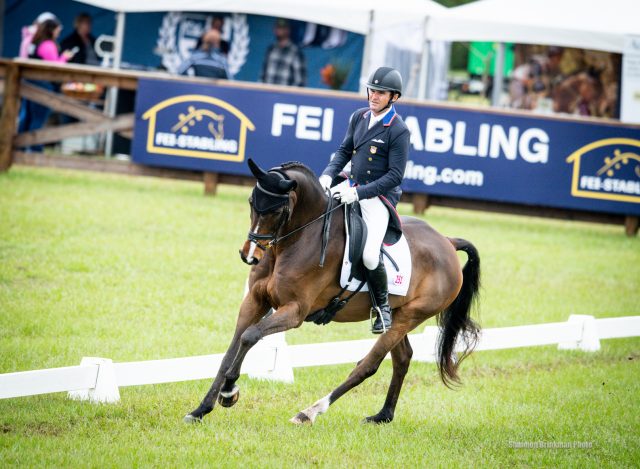 In second on 29.0 is Phillip Dutton with Long Island T, a 13-year-old Oldenburg/Thoroughbred gelding (Ludwig von Bayern x Haupstsbuch Highlight, Heraldik xx) owned by the Long Island T Syndicate. Phillip has the ride on “Ludwig” while Boyd recovers from, what is it this time, his hip? His leg? I couldn’t remember, so I typed “broken boyd Martin” into the EN website search field and this is what came up: 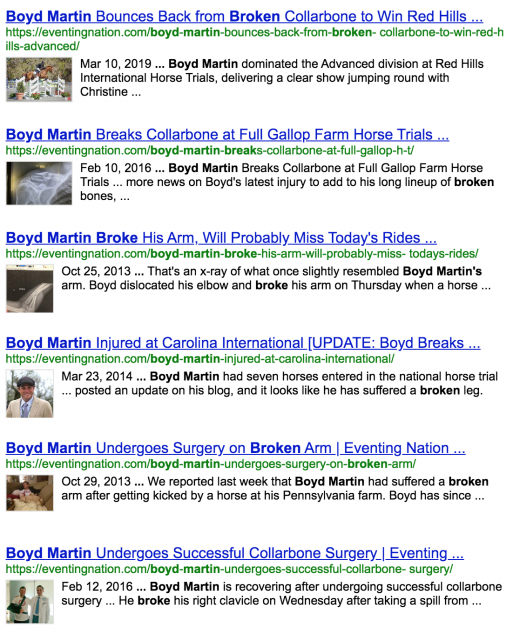 Which is to say, his most recent broken body part doesn’t even populate because he’s had so many. (But for the record, this time it’s his pelvis.) 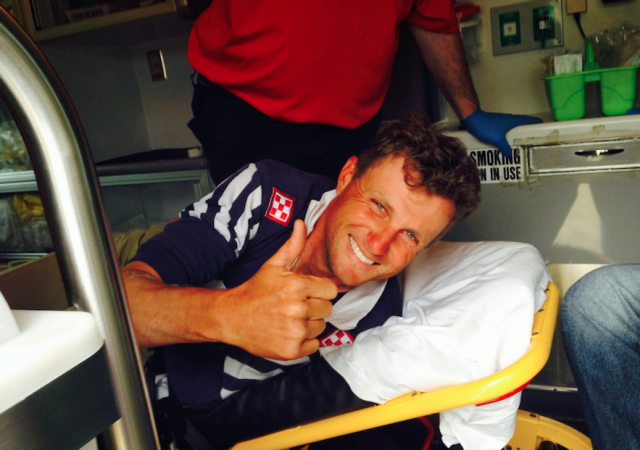 Anyway, Phillip is piloting Long Island T this week, and so far things are going well. It’s the horse’s first international outing since Fair Hill International last year, where he finished 2nd in the CCI4*-L, although Boyd and Ludwig did enjoy a high profile Adequan Advanced Final win at the American Eventing Championships in September.

Phillip got to know the horse at Virginia Horse Trials, where they placed 3rd in Open Intermediate having taken their time around the cross country. 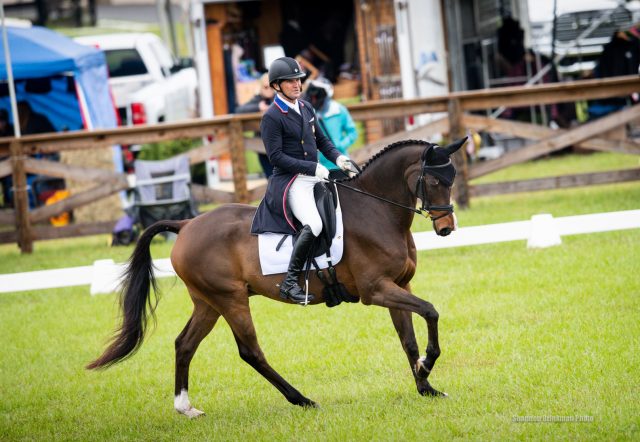 “I was ecstatic with Ludwig this morning, he went really well,” Phillip said of today’s test. “Silva and Boyd have done a great job with him, he just gets in the arena and understands what he has to do and goes about it in a pretty matter-of-fact way. There’s obviously a bit of improvement there but overall we haven’t been together too long so I was really pleased.

“It was helpful having Boyd here for my final warm-up: He told me Ludwig sometimes gets a little nervous in the halts, and that he thought he would come down a little lower in front once he got in the ring so that was useful to know as every horse reacts differently.” 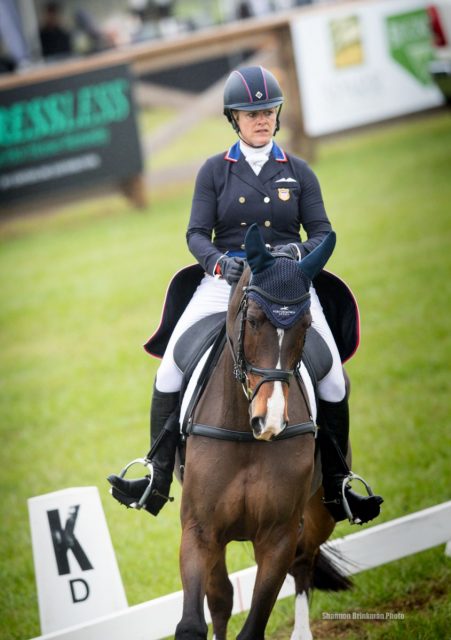 In third on 31.1 is Lynn Symansky with RF Cool Play, a 10-year-old German Sport Horse (Condors Champion x Roxana, by Radscha) owned by The Donner Syndicate.

Lynn reflected, “I thought he was a good boy, he tried in there. I thought his trot work was quite good and his walk would be his weakest gait. I think this arena — there’s a lot of atmosphere with the flags and all the tents around, but I think it’s very hard for the horses to have that fishbowl feel when you’re doing your walk back towards that hill. I think that’s why a lot of them light up more than normal.

“It also is quite chilly compared to what the horses down here have been used to. So I thought I gave away some marks in the walk and canter, but he was quite a good boy. He’s been ridden a lot recently, I had a less than ideal lead-up coming into it and then he got here and was quite wild so I’ve been spending most of my time hanging out with him on his back and off his back.”

Looking ahead to cross country, Lynn says, “It looks good. It’s twistier than it has been in years’ past, so I think that’ll have a cumulative effect on them. I do think time will be harder to make than it has in the past because there’s a little bit less galloping. [Clayton Fredericks] has been clever about what he’s done with some of the lanes to ask a little bit of a different question or some of the same questions but just changed around how he gets you there. I think the ground should be good, I think it’s great that we had the rain. That did nothing but help it. It looks like a good track — it doesn’t feel soft for sure. I think there’s questions all the way up until the end. 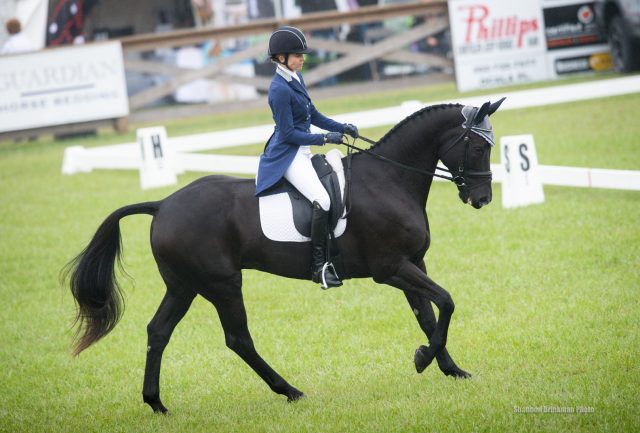 In 4th on 31.3 is Valerie Vizcarrondo Pride with Favian. 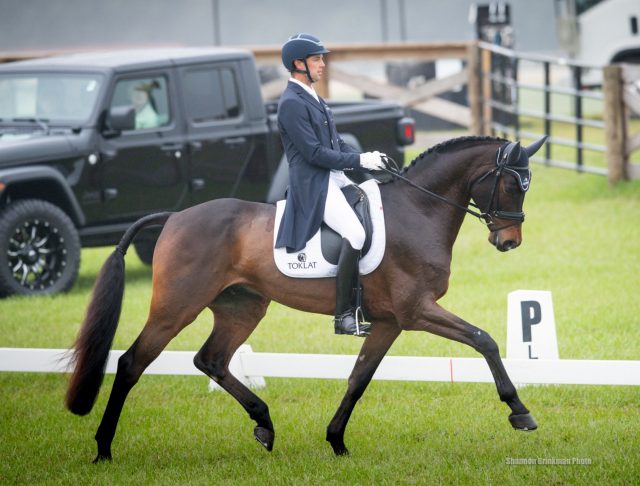 Looking to the CCI2*-L leaderboard, Will Coleman and Chin Tonic have the early margin on a score of 24.2. Buck Davidson with Cooley Candyman and Will Coleman with Steam Engine are equal 2nd on 27.9. 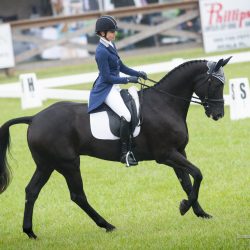 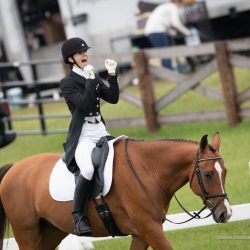 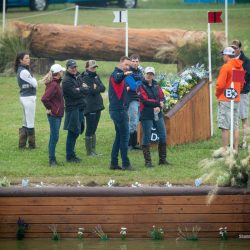 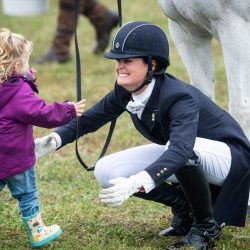 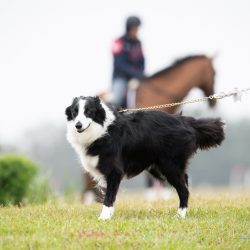 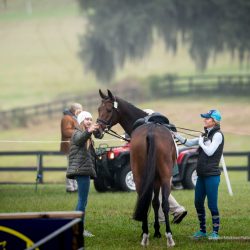 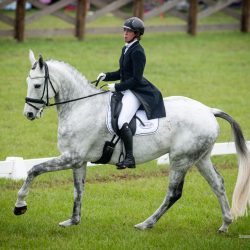 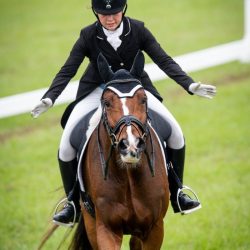 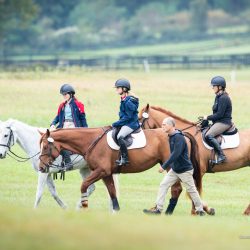 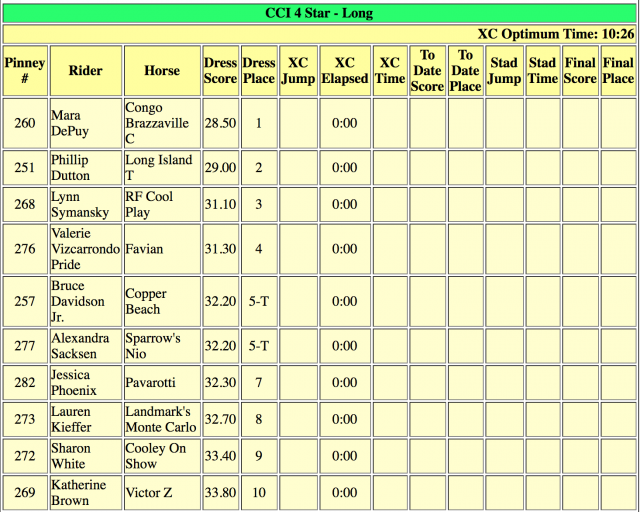 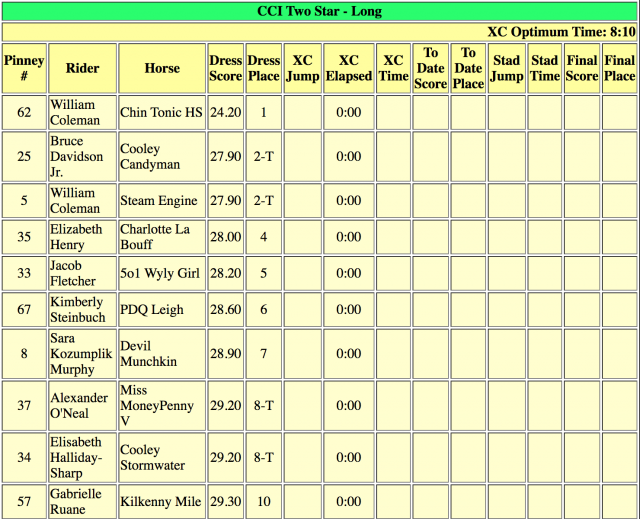