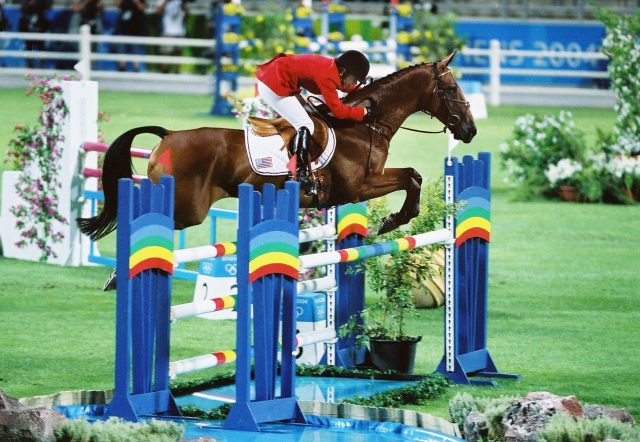 Kim and Dan at the Athens Olympics. Photo courtesy of Kim Severson.

One of the most celebrated eventing horses in history passed away this week at his home of Plain Dealing Farm at the age of twenty-six. Winsome Adante, known in the barn as “Dan,” was a legend for the sport of eventing, and a life changing force for many who knew and admired him.

Imported from England in 1999 by Jan Byyny, he was quickly purchased by Linda Wachmeister, and became the horse of a lifetime for so many people. Paired with Kim Severson as his rider, they were well known for being formidable in all three phases, placing in the top after dressage, following it with a fast and clear cross country, and topping it off with an invariably clean show jumping.

Dan and Kim have almost too many accomplishments to list, but certainly winning Kentucky three times (2002, 2004, 2005) when it was still a long format ranks amongst the most impressive. They also competed at the 2002 WEG in Jerez, earning individual 6th place and team gold, the 2004 Athens Olympics, garnering an individual silver medal as well as a team bronze medal, and the 2006 WEG in Aachen for a team fourth place finish.

Dan was the second American horse ever to win Blenheim in 2001 and placed third at Badminton in 2007, cementing his place as a winner against any competition from around the world. He was, of course, inducted into the U.S. Eventing Hall of Fame in 2015, was subsequently made into a Breyer horse, and his illustrious career kept him at the top of the USEA’s Historic All Time High Point Horse Leaderboard for more than ten years. 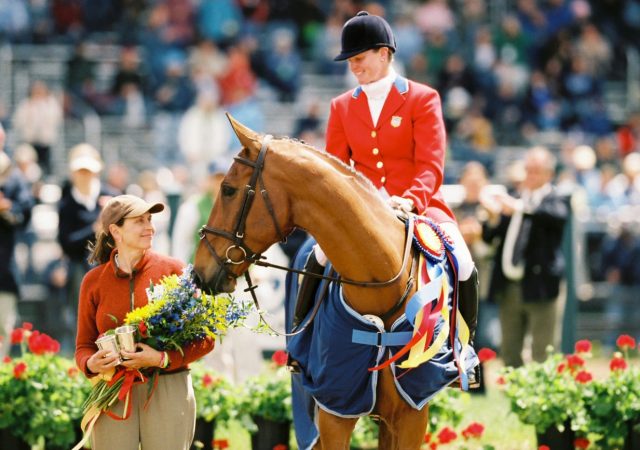 Kim readily admits that he was her horse of a lifetime, and speaks from the heart about his passing. “My once in a lifetime opportunity came in the form of a 16.1H bay gelding from England; his name was Winsome Adante, otherwise known as Dan, and sometimes lovingly referred to as Danimal the Wild Animal. So many of my firsts in the world of eventing came from my partnership with Dan: Badminton, Olympics, World Equestrian Games, Burghley, and more.”

“Now, when I think back about our time together, two words come to mind: opportunity and gratitude. What an amazing, once in a lifetime opportunity to find Dan, and then be supported in our partnership by many amazing people.”

Kim was not the only one to feel the life changing effects of this bay gelding, and his owner Linda Wachmeister shared with us her own story of Dan. “The main thing for me when I think about Dan was that he was always a very handsome horse, but when you saw him in the field he didn’t look particularly striking.  Under tack was where he became the magnificent creature that he was. He completely transformed and it never ceased to amaze me. He knew it was his time, what he was doing and he loved his job.”

“I had no idea where he would take me and my family,” says Linda. “From the first time I entered the winners circle with him I told myself  ‘this is a special, once in a lifetime moment for you Linda. Look around and take it all in.’ Then I got to repeat it because he just kept winning. It was incredibly special and none of us had any idea that’s where he would take us.”

“Through Dan and Kim, as a family, we learned about this sport called eventing and were completely immersed. It’s affected my whole family in such a positive way and without him and Kim, we would have never had any idea. I’m so very thankful for what he gave us.” 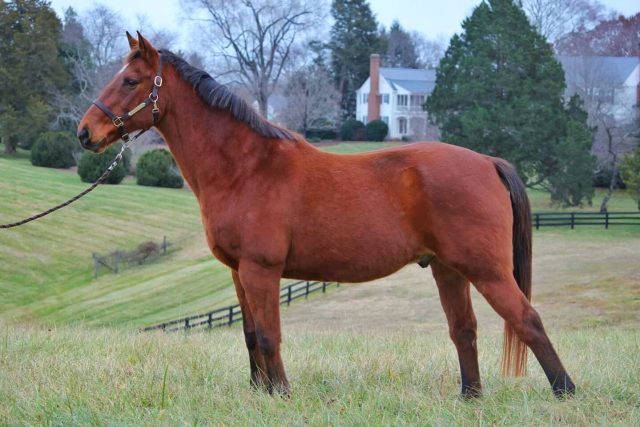 Dan in happy retirement at his farm in Virginia, Plain Dealing. Photo by Lindsay Johnson.

Dan had the special privilege to be ridden and cared for by the same small group of dedicated people for the vast majority of his life, including his grooms Molly Bull and Lili Bennett, his owner Linda Wachmeister and her daughters Lucia and Benita Strini, and of course Kim. After his retirement in 2007, Dan went to live the life of luxury at Plain Dealing Farm in Scottsville, Virginia, regularly visited by his human family with his favorite treat: peppermints.

Molly Bull groomed for Kim and Dan for several years, including his win at Blenheim in 2001, and remembers him fondly as a horse who always had an incredible sense of humor and a strong spirit. “If he had his mind set on something, he was going to do it, no matter what,” says Molly. “He was not the kind of horse you could ever hug and kiss on, but he was so amazing to ride and care for.”

Lili Bennett was Dan’s right hand girl for the majority of his career, and was even in England with Kim when they tried him. “He seemed nice enough, but nobody knew what he would become,” says Lili. “I think the first person to recognize his talent was Bruce Davidson, who came up to us after the show jumping at Millbrook and told Kim to hang on to him.”

Dan was well known around the barn for having distinct opinions, and in many ways Lili says it made caring for him almost easier, because his routine was minimalistic. He was not interested in being fussed over with therapeutic blankets, he preferred not to wear hind leg wraps, and clipping him was an adventure to say the least. 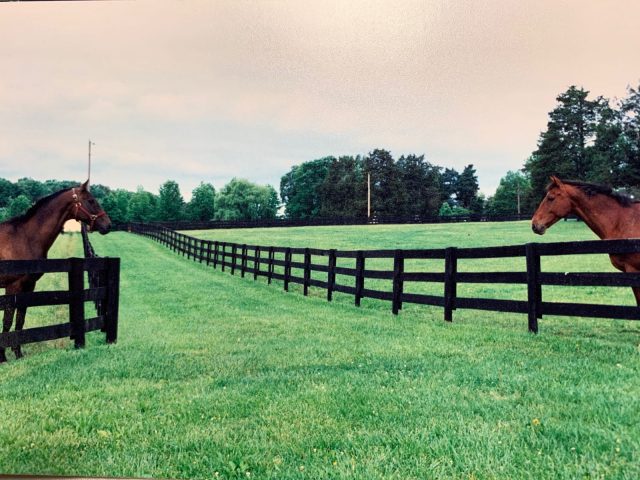 Over The Limit (Jake) and Winsome Adante (Dan) at home at Plain Dealing Farm. Photo by Lili Bennett.

Dan also greatly preferred Kim as his rider, and their partnership was what made their success truly special. “He was not terribly tolerant of us riding him,” laughs Lili. “It just wasn’t something he felt he needed to put up with, and I don’t think he really took any of us seriously.” While he may have bucked off his fair share of grooms, all of them agree that being a part of his storied success at the very top levels of the sport was completely worth it.

“I just feel incredibly lucky to have been a part of it. There really wasn’t anything all that special about him at first glance; he wasn’t the flashiest mover or biggest jumper, but their partnership was just something magical.”