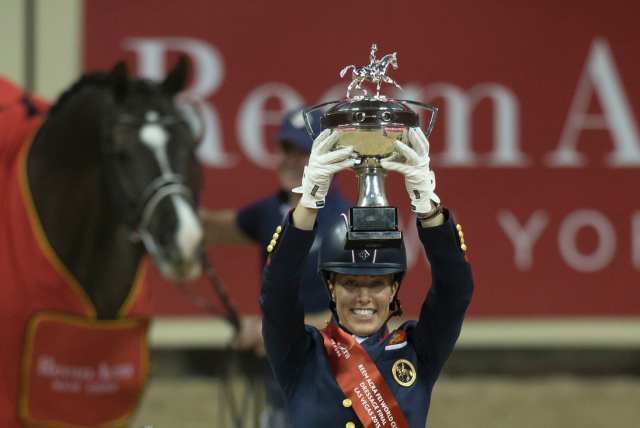 The biggest stars in the dressage world, Charlotte Dujardin and Valegro, dazzled the crowd in Las Vegas yesterday with a freestyle performance that brought the house down. Performing their freestyle to the tunes of How to Train Your Dragon, Charlotte and “Blueberry” earned a 94.196% at the FEI Reem Acra World Cup Dressage Final.

“I don’t think we’ll ever see a horse like Valegro again in our lifetime,” Charlotte said on her Facebook page. “He is my soulmate, my best friend and I cannot believe how hard he tries every time we go down that centre line.”

Indeed, the crowd couldn’t even bear to hold its applause in an arena where silence usually reigns. Cheers and applause erupted long before Charlotte and Valegro had made their final halt and salute — but the 13-year-old Dutch Warmblood was unfazed by the added commotion and even seemed to grow even taller and more proud with each cheer.

Reactions on social media were ones of awe and admiration, and deservedly so. The U.S. fans welcomed this pair onto their soil with open arms — although perhaps more than a few are wishing she’d just change her citizenship already (and perhaps switch to eventing!).

They say what happens in Vegas stays in Vegas but not today! Valegro does it again! There will never be another like him 94% to win by 10%!

Congratulations to Charlotte and Valegro on another job well done! You heard it from Carl Hester first — what happens in Vegas, stays in Vegas, so it looks like they’re staying put!