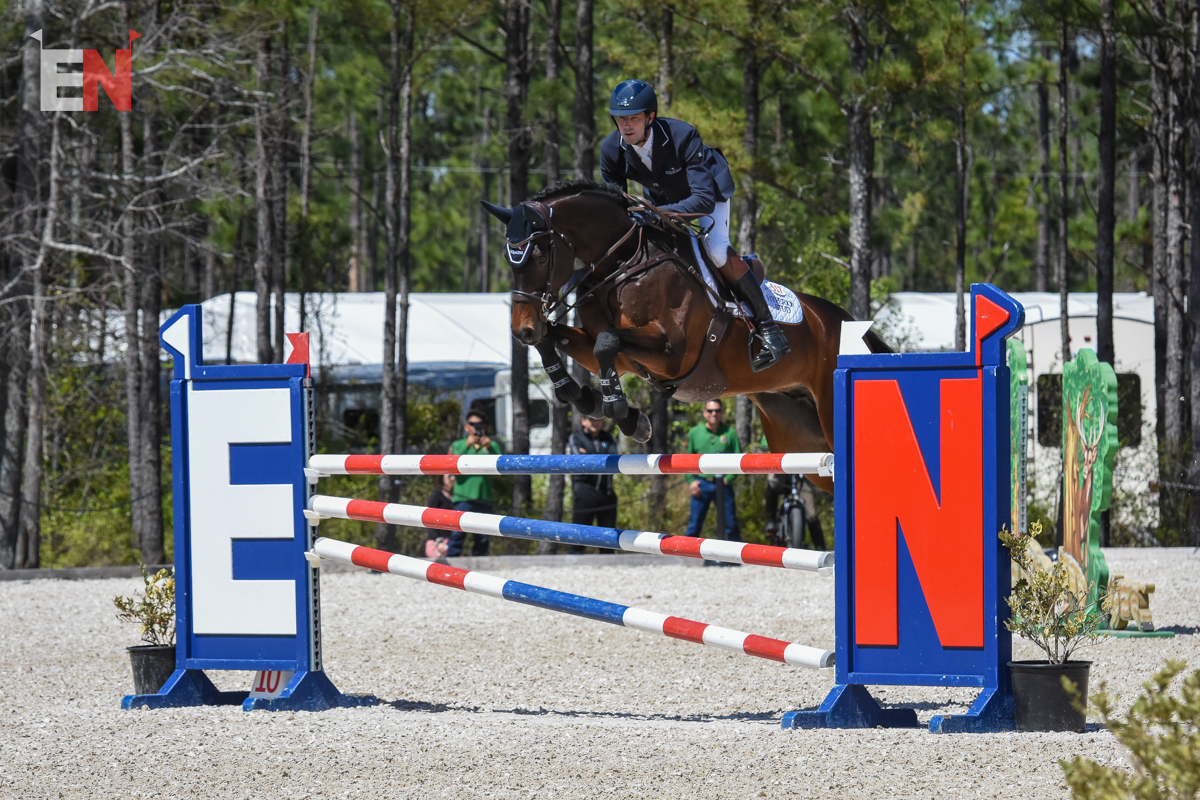 Will Coleman and Chin Tonic HS. Photo by Shelby Allen.col

Chin Tonic HS has shown great promise since he arrived in Will Coleman’s barn as a 5-year-old, and each year he keeps raising the bar. He won his International debut in 2019 at the two-star level and he’s wracked up four FEI wins since. He landed his latest headline by leading the first two phases of the Stable View Spring CCI4*-S.

“Chin,” the 10-year-old Holsteiner (Chin Champ x Wildera), is owned and sourced by Vicky Castegren’s Hyperion Stud. “I’ve known Vicky for a long time. She found this horse as a 2-year-old stallion when she showed me a video. I’ll never forget watching it there in her office drooling over it. He has so much presence and so many natural physical gifts,” he said.

This partnership’s dressage score of 22.4 was more than a rail ahead of rest of the four-star division, and a double clear trip around Chis Barnard’s show jumping course secured an eight-point lead going into the final phase. Will, ever the perfectionist, continues to look forward on how he can improve even further — one day at a time.

“The horse is doing a lot of really good things. I still think there’s another level that we can achieve but I guess in relative terms he’s still kind of new to four star level. He’s a very talented horse in that phase, and I think he has a high ceiling. I’m just trying to do it justice. He’s a horse that we have championship aspirations with. I think the key two reaching those big goals is focusing on little ones every day and I think that’s sort of how we’ve gone about it with him.” 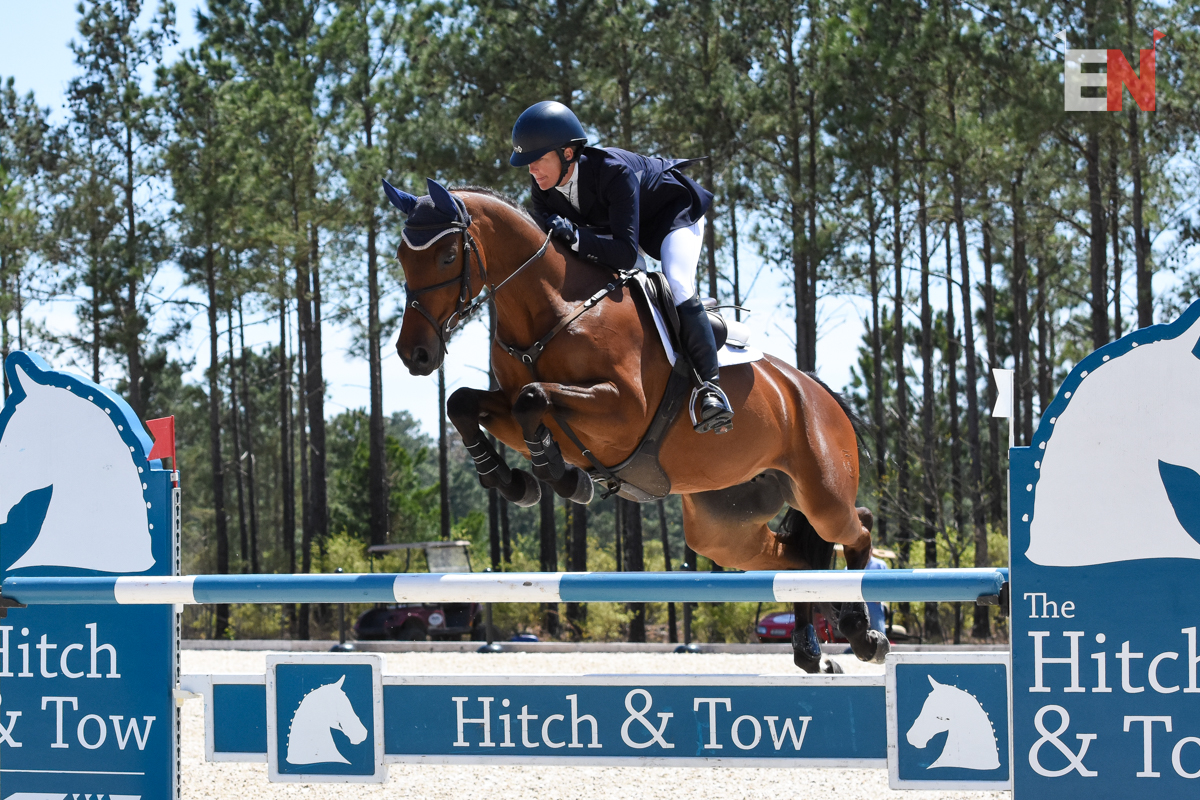 Katherine O’Brien’s Ms. Poppins, an 11-year-old Westphalian (Congress x Copa Cabana) mare ridden by Allie Knowles, moved from 5th into the reserve position after a valuable clear round. They carry a score of 31 to the final phase.

“Funny enough, I was quite disappointed with her dressage test. She is very obedient and extremely consistent. Sub-30 should be normal for her, but today she got her tongue over the bit in the first shoulder-in, making it nearly impossible to use the reins. She is so reliable so I just backed off and rode the movements and asking for nothing extra. She still threw down a test that I couldn’t fault her on given the circumstance but knowing that was not a true picture of what she has to offer. It’s early in the season for her so I’ll try to make adjustments going forward so that doesn’t happen again,” Allie said.

“As for her show jumping, she is just a blast. She jumped her heart out and gave me a beautiful round that I can’t fault her on. I made one bad line that she over corrected for me and that is just one of the many reasons I feel privileged to be her pilot.” 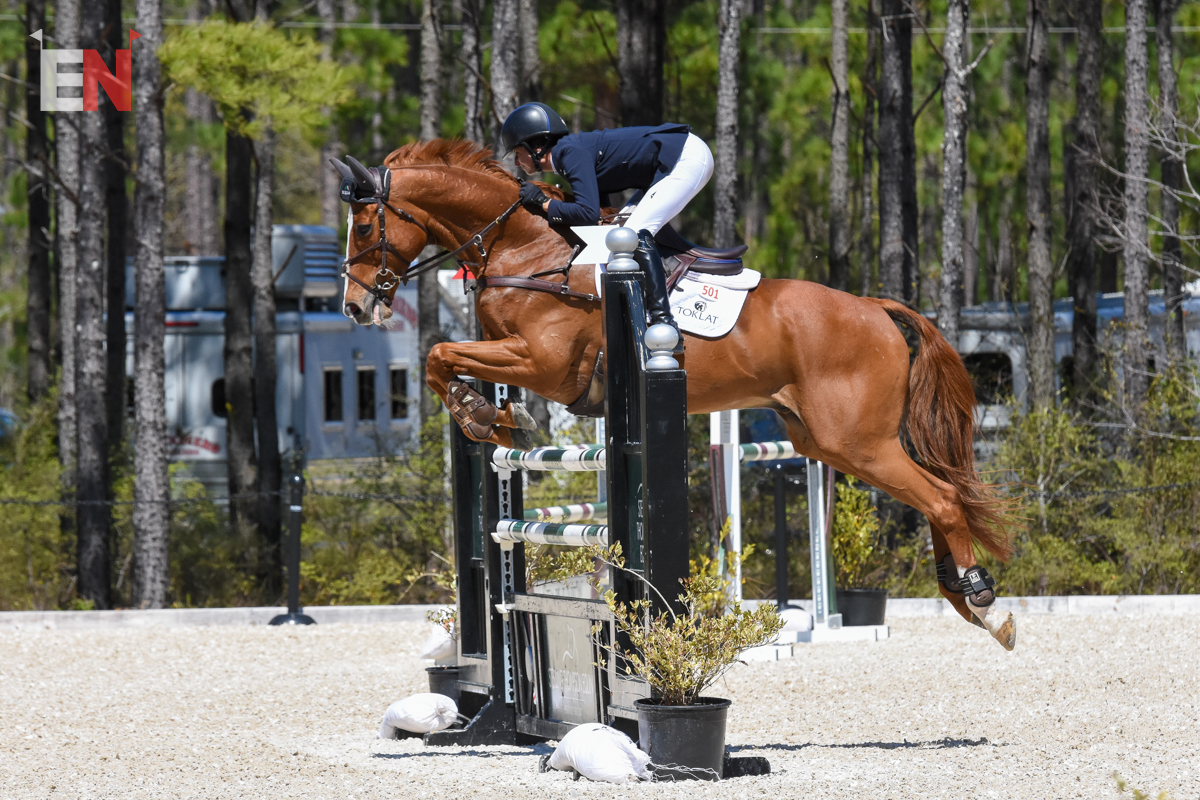 Jennie Brannigan and Twilightslastgleam, a 12-year-old Thoroughbred (National Anthem x Royal Child) are third on 32.1 points. Owner and breeder Nina Gardner was ringside cheering for their clear round. “That’s her favorite horse, and he’s a barn favorite because he tries the hardest out of any horse I ride. He had a year off, so its really exciting for him to feel like he used to again. He’s been on fire this year. I’m going to give it a go for the Garnders tomorrow. They’re just the best,” Jennie said. 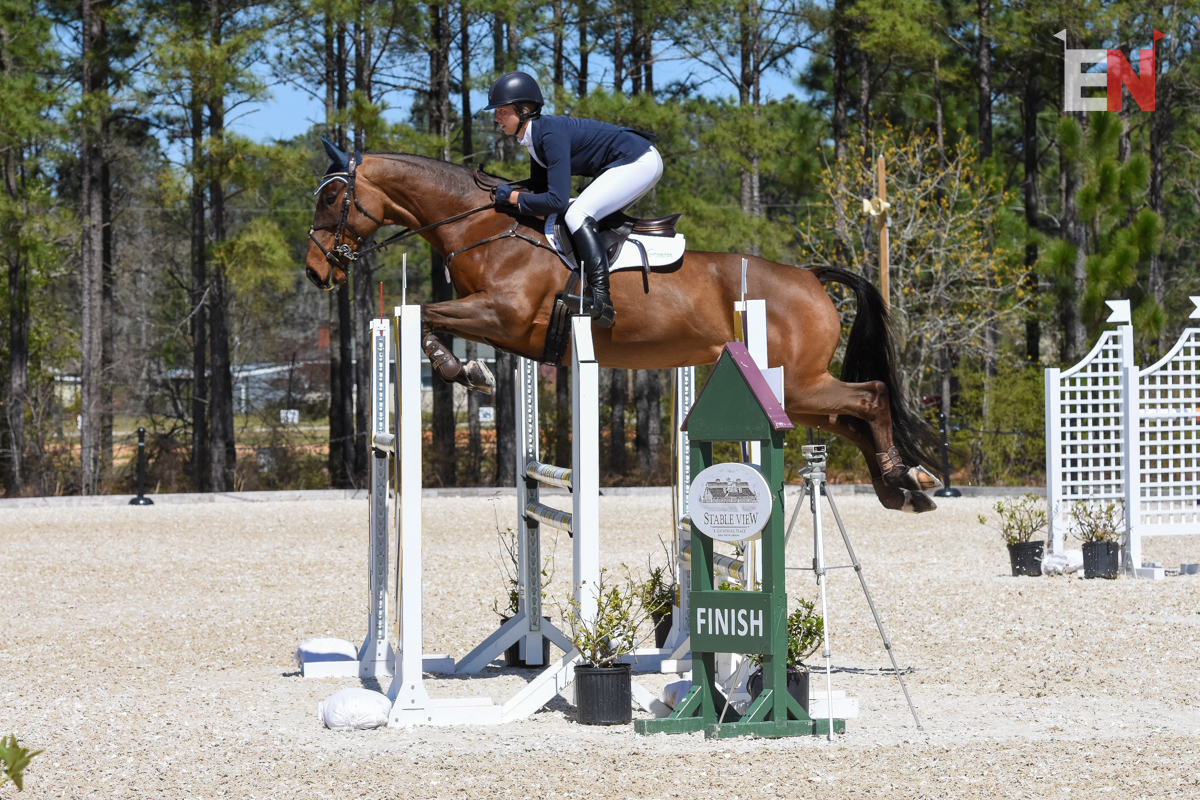 Isabelle Bosley, who was named to the Eventing 25 Emerging Athlete Program this winter, jumped clear with her Irish Sport Horse Night Quality (OBOS Quality 004 x Night Fly). The two remain on their dressage score of 33.5 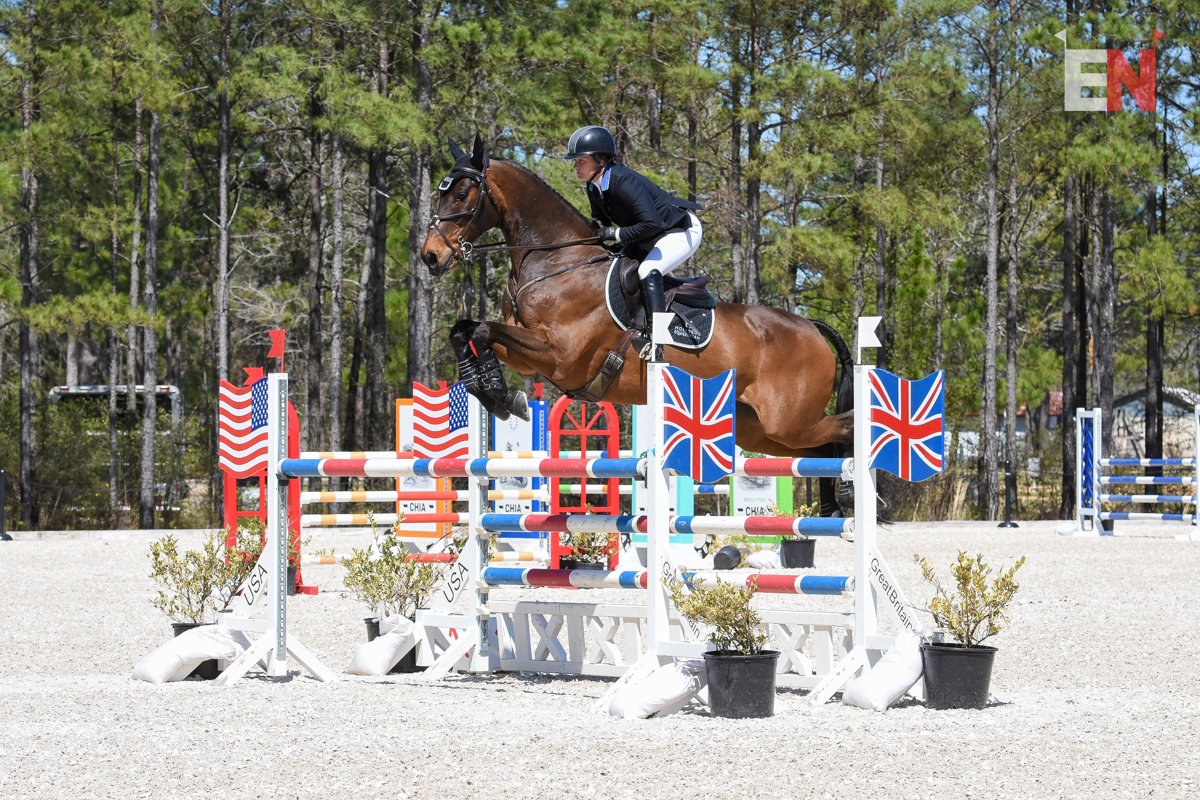 Hannah Sue Burnett and Capitol HIM. Photo by Shelby Allen.

Riding for Christa Schmidt, Hannah Sue Burnett jumped clear as the last rider in the division. She and Captiol HIM, a 15-year-old Holsteiner (Con Air 7 x O-Heraldika), had a fashionable fault-free trip remain on his dressage score of 33.6 for fifth place.

Buck Davidson is seventh aboard his own 11-year-old Thoroughbred Sorocaima. They remain on their dressage score of 36.2. Emily Hamel takes eighth place (36.3) with her quirky Corvette, who didn’t as much as breathe on a pole today. 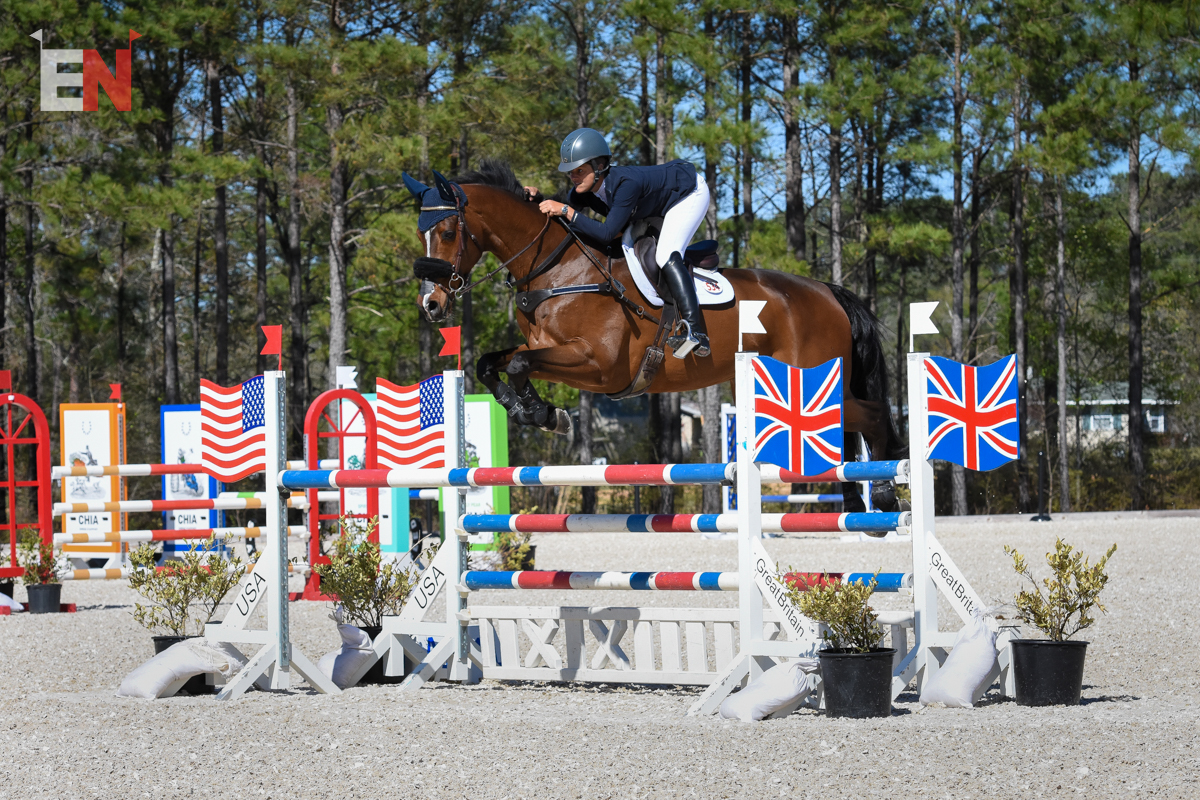 In the CCI3*-S division, Lynn Symansky leads with Global Cassero 3. A dressage result of 26.6 and a equitation-worthy show jumping keeps them at the front of the pack, even with a change to his usual routine. “He went early in the morning. He usually benefits from having a long stroll in the morning, so I thought he was little tight but even with not the most amazing test the horse is so class that you can get away with having a little bit of tension here and there,” she said. “He had some time off for some wind issues so it took some time to get him back and get him strong again. These’s big, long gangly ones just take a bit longer to develop. We lost a good year and a half trying to sort the wind, so it’s great to have him back.”

Eventers here at Stable View are out showing their support for Ukrainian relief efforts. Pins are available for purchase at the show office and all proceeds will go toward the USEF Ukraine Relief Fund.

The CCI4*-S class heads out on cross country here in Aiken, South Carolina beginning at 12:06 p.m.