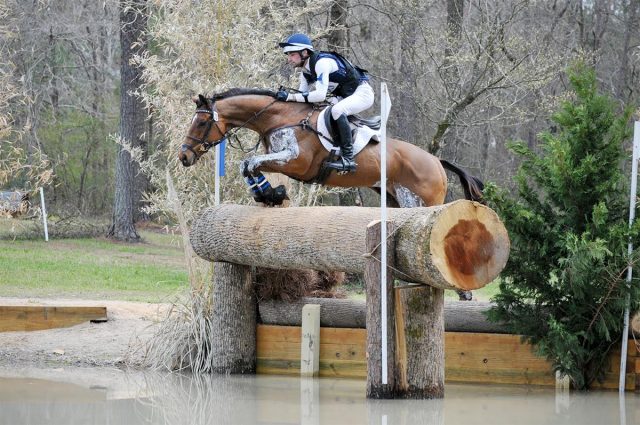 Bills making light work of the huge jump into the water at Carolina International CIC3*. Photo by Leslie Threlkeld.

At 8-years-old, OTTB Unmarked Bills was one of the youngest contestants in the CIC3* at Carolina International this past weekend, with both he and his jockey Chris Talley competing in their second attempt ever at the Advanced level. Their journey to the top together has been astonishing in more ways than one, and their story is the stuff that dreams are made of.

Bills, by Posse out of Kelli’s Ransom, raced from the ages of 2 to 5, running 24 times and earning $67,250. He raced in California, Virginia, Pennsylvania and New Jersey before retiring in November of 2014. His owner, David Nuesch, decided that the handsome gelding had a good chance of being a sport horse, and contacted none other than yours truly to see how he could sell him for his next career.

These days I’m kicking myself for this decision, but after riding him and free jumping him, I contacted Chris Talley and said I knew of a nice horse who he should take to Florida with him and sell for my friend David. Chris was doing lots of OTTB sales at the time, and I knew he would do a good job with the horse.

So Bills went with Chris to Florida in January 2015, and four months later he was entered in his first event at Training level. “I wanted to enter the Novice, but I entered late,” Chris says. “I contacted the organizers and they said all they had was a spot for Beginner Novice or for Training, so I figured we’d just give the Training a shot. He was a little unsure of things, but he has such a big heart, he just tried all weekend long.” 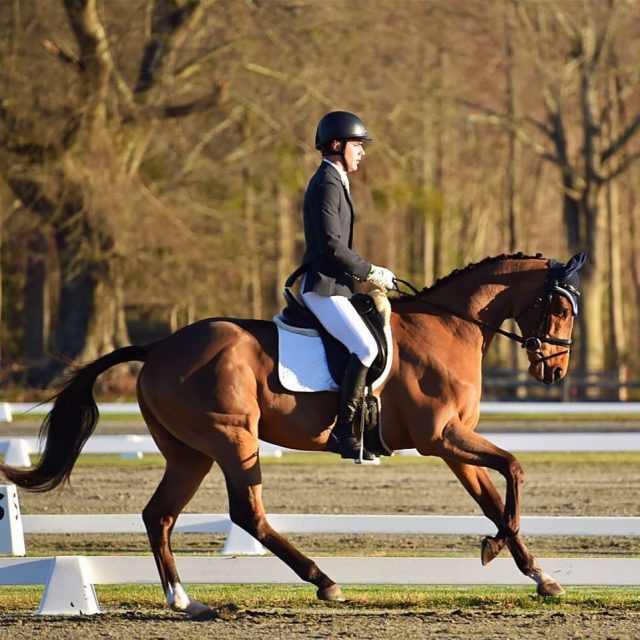 Chris & Bills in their first Advanced at Pine Top this spring. Photo by Antonio Salazar.

The pair completed three Training level events, and in August of 2015 they successfully moved up to Preliminary, only nine months after Bills had completed his last race. They finished their first year of eventing with only one placing outside of the top 10 and no cross country jumping faults.

At Carolina International in 2016, Chris and Bills moved up to Intermediate, finishing third in their division with only a rail and some time to add to their dressage score. From there on out, they did the CIC* at Fair Hill for qualification purposes, and completed three CIC2* events over the summer and fall at Virginia, Richland and Plantation Field.

When asked how he was able to move up the levels so quickly, Chris is quick to give all the credit to Bills and his incredible Thoroughbred heart. “Bills just never stops trying. The cross country has never been an issue for him,” Chris says. “He has struggled with connection issues on the flat, but he’s always been incredibly bold over jumps.”

They topped off their stellar year in 2016 with a 15th placing at the Dutta Corp Fair Hill International CCI2* and a double clear cross country round. At only 7 years old, Bills received the USEF Reserve Champion Young Horse Award. 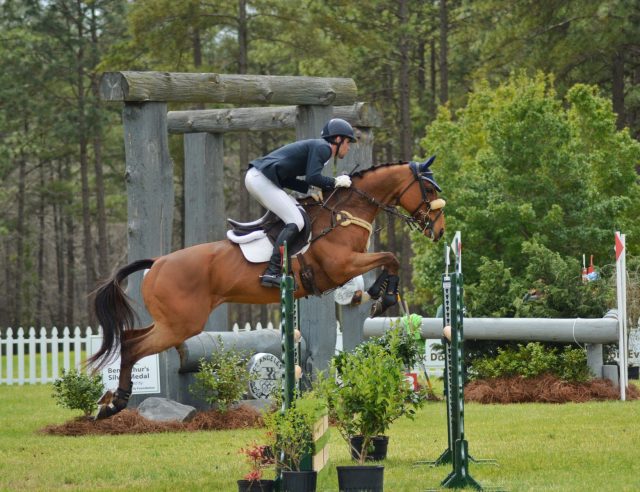 Chris and Bills in their first CIC3* at Carolina International. Photo by Kate Samuels.

Over the winter, Chris worked on Bills’ dressage and show jumping, focusing on improving the quality of the movements and the accuracy over fences. “He wants to be really careful, but he can get a little tense sometimes,” Chris explains.

Bills has also been enjoying some dressage tutelage from Hannah Salazar, who has partnered up with Chris in the past year and is an accomplished dressage rider and avid breeder out of Zaragoza Acres in Virginia. Hannah also owns Chris’ other upper-level mount, Sandro’s Star, a 9-year-old Oldenburg stallion competing at the Intermediate level.

This spring, Bills ran the Intermediate at the first Pine Top in early February before making the move up to Advanced at the second Pine Top later in the month. That was the first attempt at the level for both horse and rider, and they went around it like it was no problem.

“He was really, really spectacular at Pine Top,” Chris says. “I took all the direct routes and didn’t waste any time. He is so good on cross country, but I wanted to see how bold he was, and he answered everything really easily.” 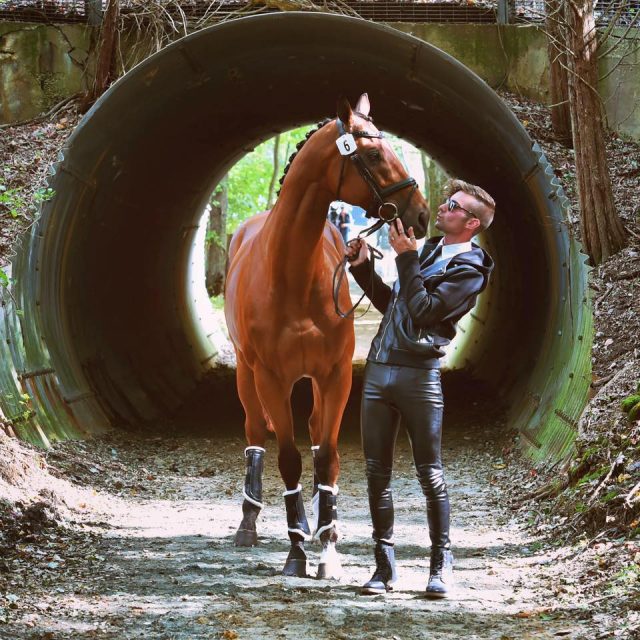 Chris and Bills before the first horse inspection at Fair Hill. Photo by Antonio Salazar.

Chris and Bills moved up to the CIC3* level this past weekend at Carolina and had a fabulous run. For a horse that hasn’t even been eventing for two full years yet, that is a pretty amazing feat.

Chris is in the final stages of putting together a syndicate to keep the ride on this amazing Thoroughbred, with five total owners including David Nuesch and his wife Daryl, who are delighted to see the horse enjoying so much success in a second career.

As for now, they’re taking it one event at a time, but the aim is to do at least one more CIC3* and then aim for Bromont CCI3* in June. We can’t wait to see where this pair goes, and we just adore a story of a good OTTB full of heart!

As a bonus, we have footage of Bills’ first free jump at home in Virginia, alongside his Fair Hill CCI2* cross country, less than two years apart!