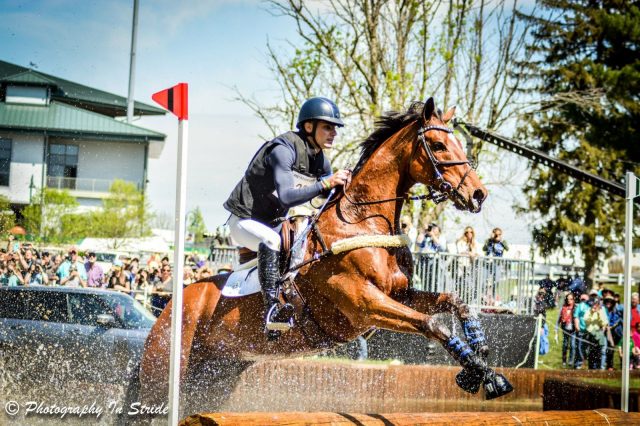 Chris and Billy out of the Head of the Lake at Kentucky. Photo by Miranda Akins/Photography In Stride.

The story of Chris Talley and Unmarked Bills is a fairytale come true, and we all watched this spring as they tackled their first CCI5* together at Land Rover Kentucky Three-Day Event, turning in a spectacular clear cross country to capture hearts across the nation.

For the uninitiated, their partnership is everything we all dream of when we find a plain brown Thoroughbred ready for their next career off the racetrack. Unmarked Bills (Posse x Kellis Ransom) retired as a 6-year-old, having run 24 races all over the U.S. but only winning three times and $64,250. His owner at the time is a family friend of mine, and knew he would make a nice sport horse, so I looked him over and connected him to Chris Talley, as I knew he would make a great partner for the horse. Chris promptly picked him up from the track, and within four months “Billy” had run his first horse trial, at Training level no less.

They rapidly moved up the ranks, thanks in large to Billy’s innate talent and bravery on cross country, and within two years they moved up to Advanced together, a first for both of them. Two years later they entered and completed their first CCI5* in Kentucky, making us all fangirls along the way. 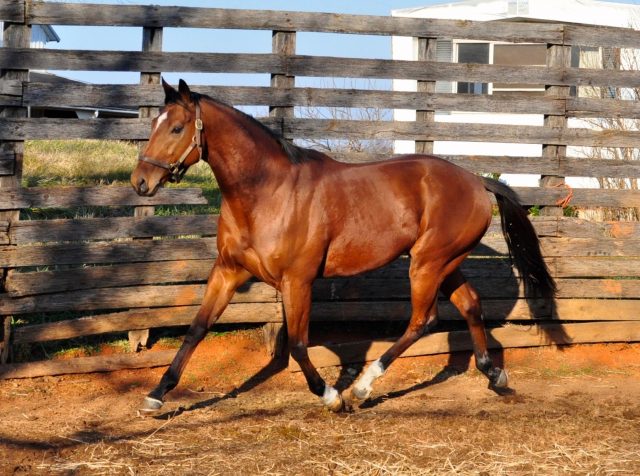 Bills on the first day I saw him, fresh off his racing career. Photo by Kate Samuels.

Chris is still a little shocked that it actually happened, a dream come true in the most realistic way possible. “Leading up to Kentucky, I wasn’t sure that I could even do it. Being able to complete the event on him was very reassuring and gave me a lot of personal confidence,” says Chris. “I said all along that I thought he was a five-star horse, but a lot of people didn’t see it. He just stepped up to the plate and tried his heart out for me.”

Chris is quick to thank the incredible dedication of all his supporters and syndicate owners in making Kentucky a reality, but in particular Hannah Salazar and the team at Zaragoza Acres, where Chris is based. Hannah is a dressage rider and works closely with Chris and Billy in the never-ending pursuit of improved flatwork, but also has become an avid eventing enthusiast through her partnership with Chris over the years.

Billy came away from the biggest competition of his life feeling better than ever, and looking fantastic. He enjoyed five weeks off, turned out as much as possible with his group of gelding friends, who he enjoys bossing around as the king of the field. He’s back in work now, and focusing on the next big goal.

What’s bigger than Kentucky? What’s the ultimate feather in your hat as a three-day event rider at the top levels? Burghley. Big bad Burghley. This is where Chris and Billy are headed next, with a little help along the way. 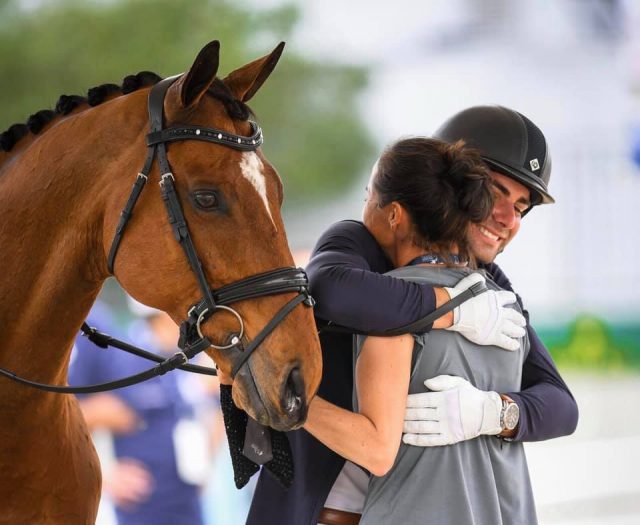 For a big, grueling cross country course that requires not only talent but incredible heart, what better partner than an OTTB? “A few people who saw him at Kentucky mentioned that they thought Burghley would suit him, and it kinda stuck in my mind. He’s looking fantastic, and we’re working hard on his dressage and show jumping, and I figured while he’s at his peak we might as well give it a shot!”

“I’ve always been a huge advocate of the OTTB. Ever since I was 15 years old, I’ve brought them along, and I truly believe that they’re the best cross country horses out there. It’s nice to know that three-quarters of the way around a five-star, you still have plenty left in the tank, and at Kentucky Billy still had plenty of gallop left at the end.”

Burghley is a big goal, and Chris is lucky to have a fantastic base of supporters including Billy’s syndicate members and clients who believe in this dream. However, in order to fully fund the travel from Virginia to the UK, Chris is hoping to get some support from Billy’s larger audience and become part of the journey along the way.

“I set up a GoFundMe to let people know about the #BillsToBurghley movement, and I’ve also set up private Facebook and Instagram pages for anyone who makes a donation,” says Chris. 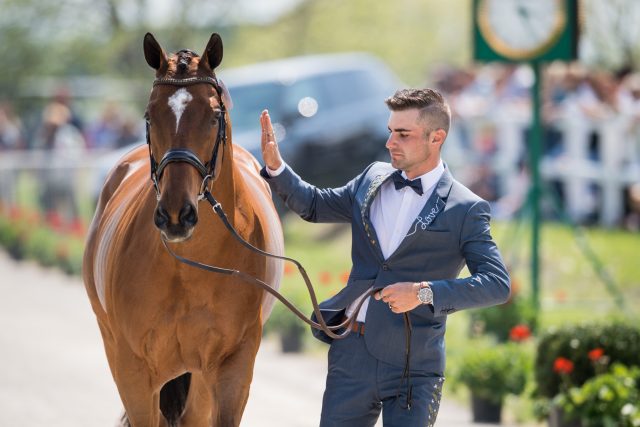 Chris and Billy on the catwalk. Photo by Shannon Brinkman.

While any donation is helpful, Chris has set up three levels of membership, each with its own unique insight into Billy’s world. The private social media pages will include the helmet cam footage from Kentucky, which has not been released to the general public, as well as photos and videos from daily life as Chris and Billy prepare for the Big Event.

You can also get autographed photos from Kentucky, Bills to Burghley polo shirts, and an exclusive meet and greet cocktail party at Zaragoza Acres with the whole team prior to them leaving for England.

“He’s my horse of a lifetime — without him coming into my life, I wouldn’t be where I am today. He’s brought me up the levels and put me on the map giving me exposure and experience,” says Chris. “He’s just such an incredible cross country horse, he’s given me so much confidence. I don’t know if I’ll ever find another horse like him, he has so much heart and so much try.”

“People question why I put so much time into the horse, he’s not that great on the flat or great in the show jumping, but there have also been people who have helped me with those, he’s given me his all, and he’s shown me around the country and hopefully the world.”

To become part of the journey and get Bills to Burghley (Chris needs to book Bills’ flight by August 10), check out Chris’ GoFundMe page here.