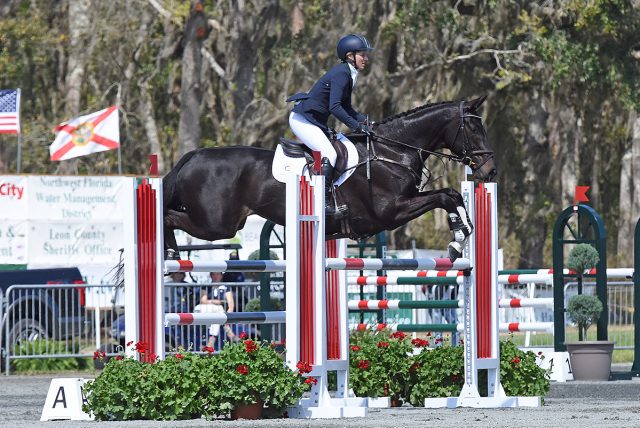 Christina Henriksen has put in the work with the talented mare JTH Zest, producing her up to three-star level over the last four years, and today lofty goals came to fruition in the form of a blue ribbon earned by winning the Red Hills CCI3*-S.

“She’s a wonderful mare. She’s not always easy and things have to be her idea and her way, but as she’s gone up the grades she’s developed her own unique way about all three phases. Now as long as I’m clear about what I’m asking and stay out of her way on cross country and show jumping, she gives me her whole heart,” Christina said.

Christina looked sure and determined today, but she says that confidence hasn’t always come easily, and competition butterflies have often been more of a hinderance than a help until she really started focusing on her mental game last year.

“I always feel pressure and I’ve really struggled with nerves in the past. This time last year I started training with Brian Murphy, and he’s really helped me with that,” she said. “He’s helped me with this mare to get her jumping well and for me to ride her in the best way possible. I think because of all the work I’ve done with Brain over the last year, I was able to go in and not think about anything except that I wanted to give this mare the best ride I could.” 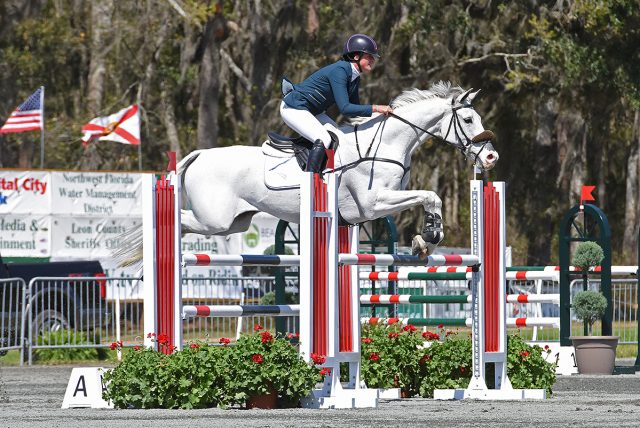 The experienced duo of Lauren Nicholson and Landmark’s Monte Carlo finished second after also delivering a clear round. Jacqueline Mars’ 14-year-old Irish/Thoroughbred Cross (Formula One x Glamour) finished on a score of 34.

Lauren also landed Vermiculus inside the top five. Jacqueline Mars’ 13-year-old Anglo Arabian added nothing in the final phase to close the weekend on a score of 36.6. 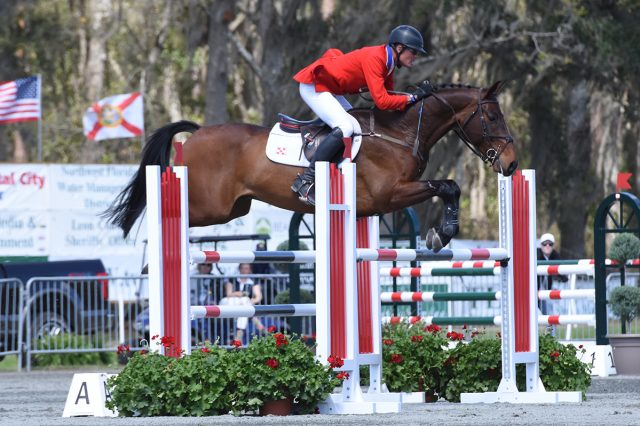 The crowd collectively gasped when a rail fell late in the course for overnight leaders Kyle Carter and Gaillard Lancer. The four penalties dropped Savannah Blackstock’s 9-year-old KWPN (Diardo x Urlanto) into third place with a result of 36.6.

Full brother to second-placed “Patty,” Landmark’s Monaco finished fifth with Kimmy Cecere in the irons. The 13-year-old Irish Sport Horse/Thoroughbred, who is also owned and bred by Jacqueline Mras, finished on his dressage score of 38.6. 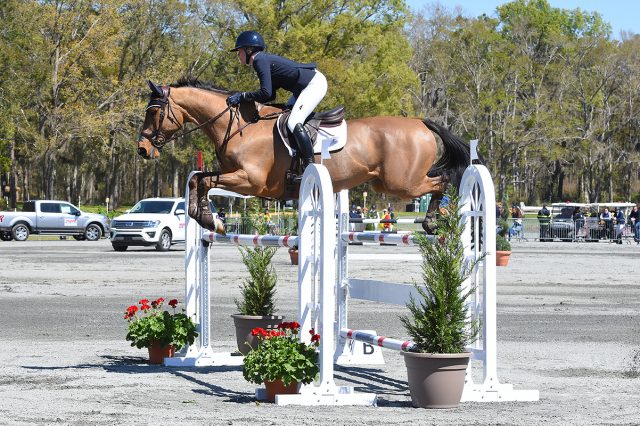 Alyssa Phillips secured the win in the Red Hills Advanced division today with her and Julie Phillips’ Oskar.

The the 11-year-old Holsteiner made easy work of the course, adding nothing to their overnight score of 38.9.

“I didn’t know how we’d come out after jumping yesterday. I know we didn’t go very quick, but it’s still a bit track and he hasn’t jumped show jumping after cross country at the Advanced level yet, so this was a big test,” Alyssa said.

Today was significant for Alyssa in more ways than one, making this win even more impactful.

“This is actually the day my father passed away eight years ago, so this win is for him,” she said. “The last time he saw me ride was at Young Riders back in 2011. He made me the competitor I am today.” 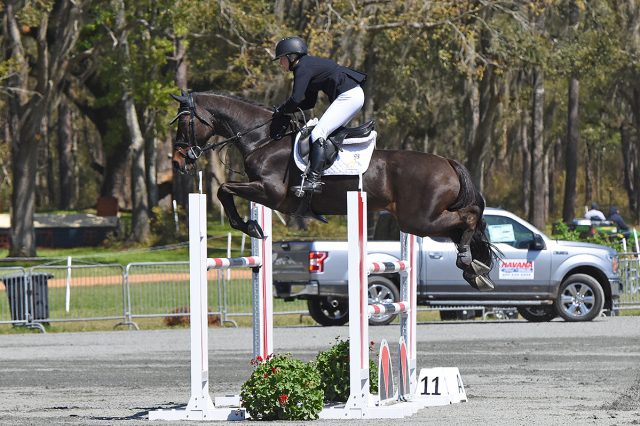 Marilyn Little piloted RF Scandalous, a 14-year-old Oldenburg (Carry Gold x Richardia, by Lario), owned by Ms. Jacqueline Mars and Phoebe and Michael Manders, to second place on a score of 41.2. The pair had a double clear round today. 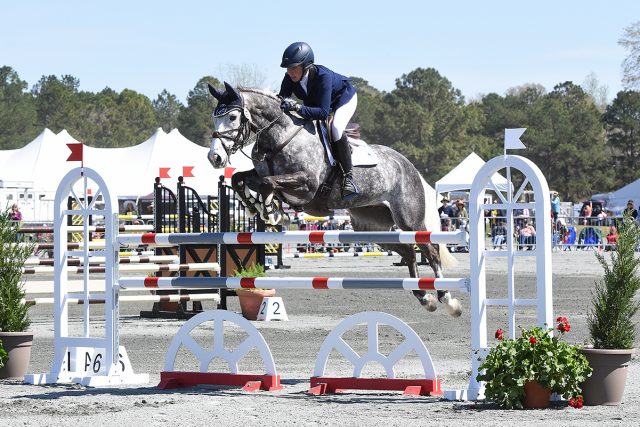 Liz Halliday-Sharp and Pru Dawes’ Flash Cooley were third. This was the 8-year-old Irish Sport Horse’s debut at the level. He finishes on a score of 46.1 after a fault free round.

Fourth place went to Jennie Brannigan and Twilightslastgleam. The pair produced a clear effort to finish on 50.2 points. Will Coleman and Don Dante were fifth after having one rail and 0.8 time penalties for a three-day result of 55.9. 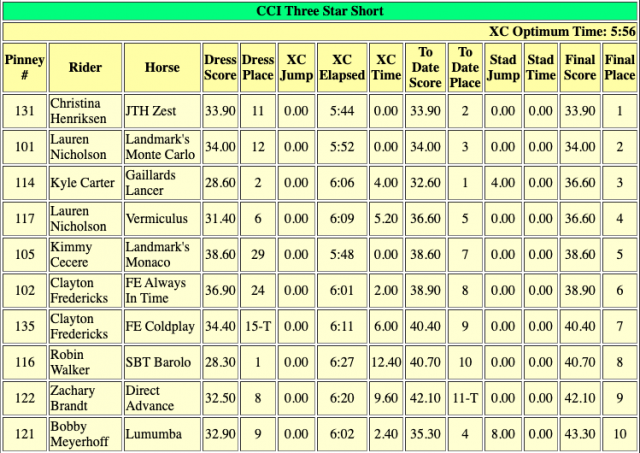 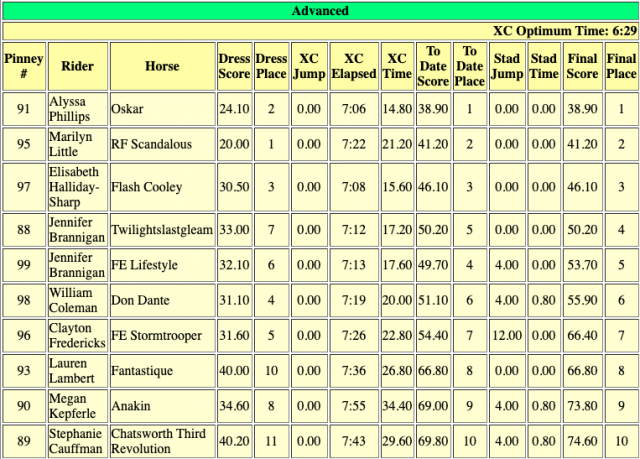