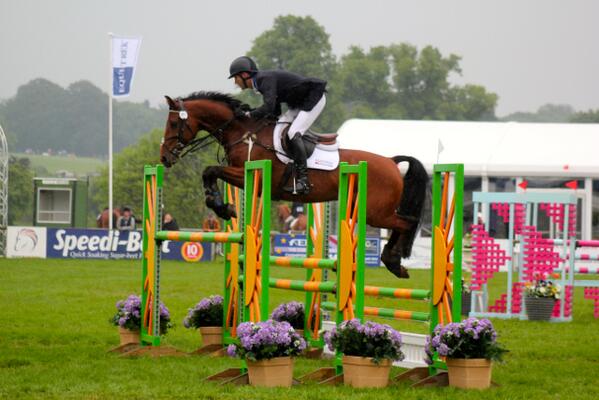 Clark Montgomery and Universe in the Bramham CIC3*. Photo by Samantha Clark via Twitter.

The leaderboard in the CIC3* at Bramham saw quite a bit of shake up after show jumping this morning. It appears that perhaps the footing was an issue, and the PRO Twitter account reports horses struggling to find balance in the footing.

William Fox-Pitt has retained his lead, but none of the remaining overnight top 10 riders are still in their overnight positions after today. In a field of 66, nine horses completed double clear show jumping rounds. The pairs that had minimal time and/or rails were rewarded with big jumps up the standings. 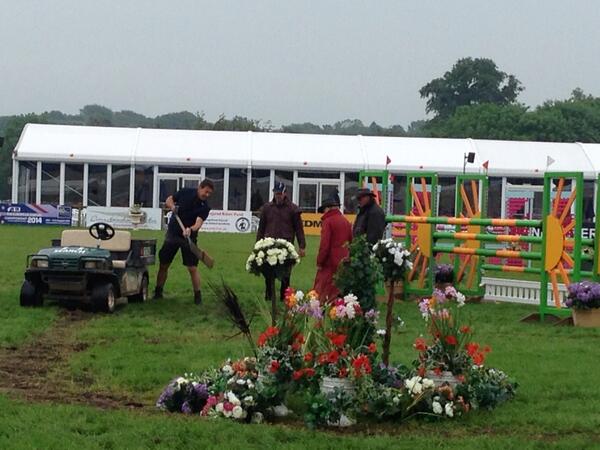 Grounds crew working to maintain the footing in the CIC3*. Photo courtesy of Samantha Clark on Twitter.

Great Britain is still dominating the leaders, with seven pairs in the current top 10 going into cross country. Our own Clark Montgomery had a mighty move up the board, jumping all the way from 27th to 10th after putting in one of the few double clear rounds with Universe. Clark will most certainly be thrilled with this result, which puts him within 20.2 points of the leader. Buzz is Clark’s sole horse in contention for a spot on the WEG team now, so a stellar result is needed this weekend. The WEG team picture still remains wide open, and Clark has put himself into good position for his final selection trial.

Canada’s Shandiss McDonald was one of the many victims of the show jump course today, falling from 34th to 55th after incurring 17 penalties on course today. Sitting in third place overnight, Emily King and Mr. Hiho were eliminated on course, and Oliver Townend and Black Tie II, second overnight, withdrew before competing today.

In the CCI3*, Tattersalls CCI3* winner Izzy Taylor has retained her lead after adding 14.8 time to her incredible score of 28.1. While she certainly doesn’t have as much breathing room as she did after dressage, she still goes into show jumping tomorrow into the lead, although she will need to leave the rails up to secure the win. Ireland’s Aoife Clark and Fenyas Elegance moved up from 11th to second with .8 time, and Jodie Amos jumps from ninth to third with another quick round. 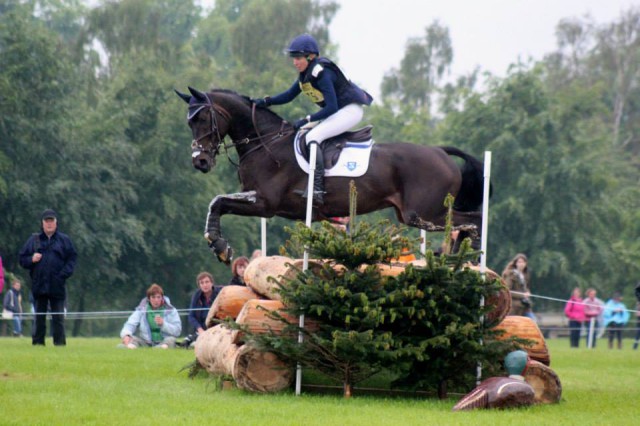 Liz Halliday and Fernhill By Night on course in the CCI3*. Photo courtesy of Samantha Clark/PRO.

43 pairs completed cross country today, and many others fell victim and were either eliminated or retired on course. Among those who retired is U.S. rider Liz Halliday and Fernhill By Night. Sitting in third and fourth, respectively, after dressage, Pippa Funnell and Or Noir de la Loge and Mark Todd with NZB Campino were eliminated on course, proving just how tough it was riding today.

PRO Blog writer Samantha Clark was able to catch up with Liz after her round today:

“Liz reports that she was in two minds whether to run Blackie today as the going didn’t suit him, and she said although she had a good shot at the step up the skinny triple brush at 6A & B, the footing was very wet and slippery there under the trees, and he perhaps lost confidence and ran out at the last minute, and then also ran out at the alternative, so she retired him after jumping it.“