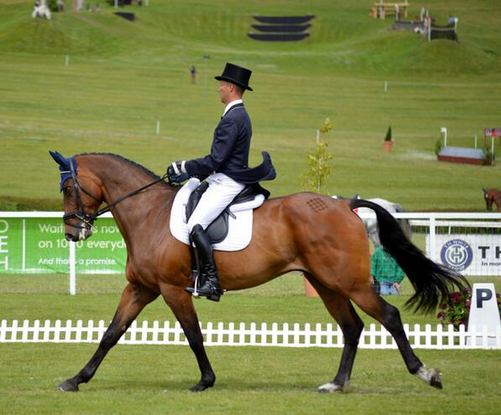 As planned, Clark Montgomery has withdrawn Loughan Glen from the Barbury International CIC3* after sitting in second place overnight, as the ultimate goal is Aachen in two weeks, Samantha Clark reported for PRO this morning. As the footing is also a bit firm and Universe is further down the leaderboard, Clark also decided to withdraw Buzz, according to PRO.

On yesterday’s show jumping round with Universe, Clark told PRO: “I missed! I absolutely missed! The five [strides] walked short and I just completely sat there like an idiot; it was totally my mistake, I arrived there on five and a half and he just stopped so we had to come back around and pop over it again.

“It’s one of those silly things that doesn’t happen to me very often, it was a big oxer, a single fence but I was way off it, especially watching back on the video. He was jumping really well and big over everything, I just needed to help him a little! The ground is still a little firm and we’re a long way off any CCI that he’s going to do, and you always have to assess the risk against the positive so we decided not to go.”

In the meantime, Andrew Nicholson will seek the win in the CIC3* class for the third year in a row aboard Avebury, where he leads on a 34.8 over Sir Mark Todd and Leonidas II. Cross country has just gotten underway, and the Barbury Castle Twitter page is providing updates, which you can follow along with here.