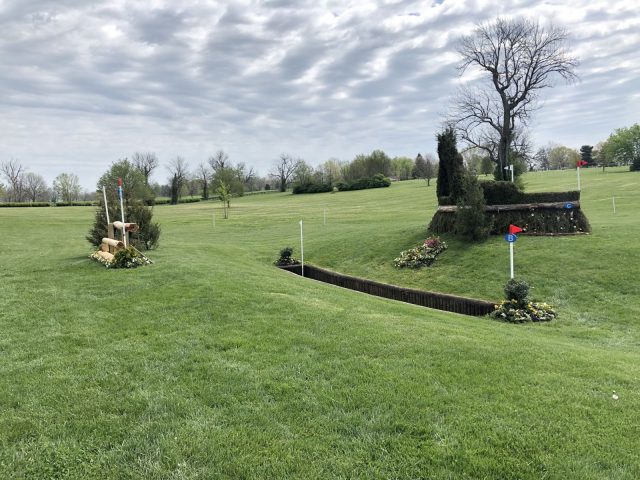 If we could pick one sentiment expressed by riders ahead of Saturday’s cross country test here at the Land Rover Kentucky Three-Day Event, presented by MARS Equestrian, this would be it.

In his 11th year as designer here, Derek di Grazia says he starts the process of mapping out the next year’s track as soon as three or four weeks after the conclusion of the current year’s event.

“Last year I came about three weeks after this event with everything off the fields, so there’s nothing,” Derek described. “I start from nothing and basically build the track of where I want to go, and then once I have the track I start figuring out what jumps I want to go where, and that’s usually on my second to third visit. By the third visit that’s finalized, and we start building on the fourth visit, and then the fifth, sixth and seventh visits we’re finishing.”

It’s a process, one filled with both creative and technical elements, to create a track that squarely challenges its competitors without posing a major safety risk. In any 5*, there is a veritable mix of experienced pairs and first-timers, and a course designer must have the ability to challenge all with his or her design. Variety is also the spice of a good course designer’s life, and Derek tends to change things up a fair bit each year — this year’s course, for example, explores a few new lines and areas of the park that haven’t been used in a few years. The Sunken Road in the infield is one fence making a resurgence this year, repurposed with a big log ahead of a drop leading to a triple frangible arrowhead. 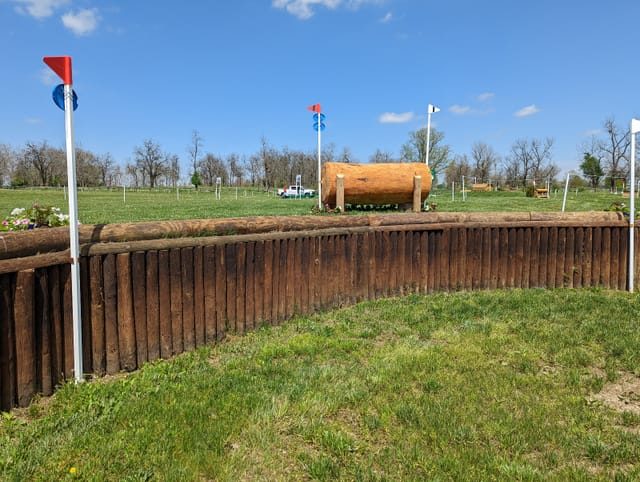 “My development of a course is something where I try every year to bring something new forward,” he continued. “So we’re not looking at the same track and the same combinations. Obviously we have features here that we use, but I try to mix it up, have it come in a different order and do that.” 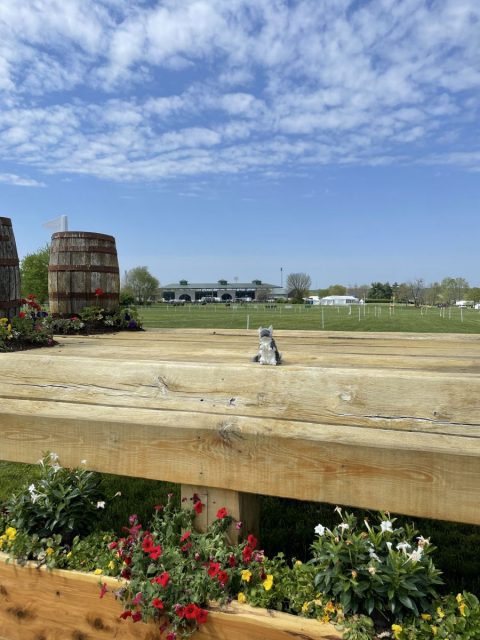 Chinch for scale: Fence 9 here, the Whiskey Barrel Table, is 7 Chinches tall and and 9.5 Chinches wide. Photo by Sally Spickard.

The course starts and ends in the same areas as it traditionally does, but twists through in some different directions to the point where it’s running, in many ways, in the opposite direction of its 2021 predecessor. The track wouldn’t look like the biggest one ever built at this level, but here’s where Derek is, as Colleen Rutledge puts it, “a little bit of a Machiavellian genius”. What may seem like an innocuous question (though, to be fair, I’m not sure there is such a thing at this level) is made infinitely more difficult by the terrain, which he so often loves to play with in subtle ways, the positioning on the course, and the fact that Derek does not want riders married to a set striding. This course wouldn’t be a “mathematical” one, as Doug Payne put it. Rather, it will test the instincts and reactions of each horse and rider.

“This is going to separate those that want to be from those who are and you’ve got to be able to ride, not just off of your eye but off of your leg, and probably off of your butt,” Colleen noted. Tamie Smith agreed: “I think it’s going to be very reactionary, which I think the designers are starting to lean towards. It used to be more of an accuracy type thing and how you jumped in but now you don’t know how your horse is going to react to these terrain type questions and you got to have feel and I think that’s what makes a good cross country rider and a good cross country horse.” 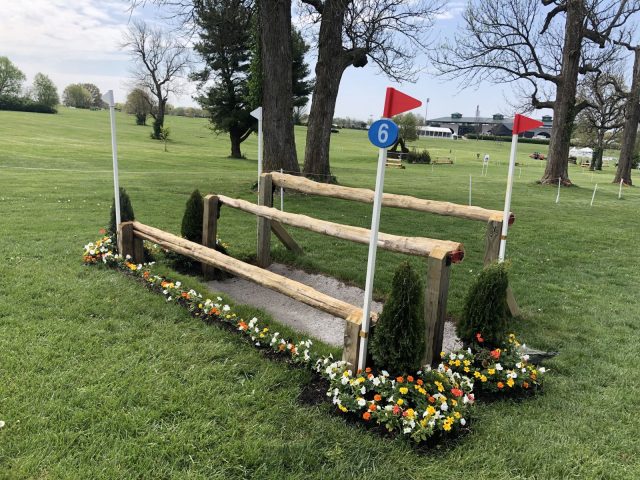 Check out that divet under the Fence 6 the Triple Scoop, which is set downhill on the way to the MARS Sustainability Bay. Photo by Abby Powell.

“I think that the way in which it’s set, that you’re going to see a whole lot of different solutions for the same problem,” Doug Payne added. “I think it’s going to require you to be super sharp and reactive, and it’s more of an instinctive test than it is a mathematical formulation.”

The course carries an optimum time of 11 minutes, 4 seconds with 28 numbered fences and 41 total jumping efforts, making it a definitive test of fitness across Kentucky’s rolling terrain. 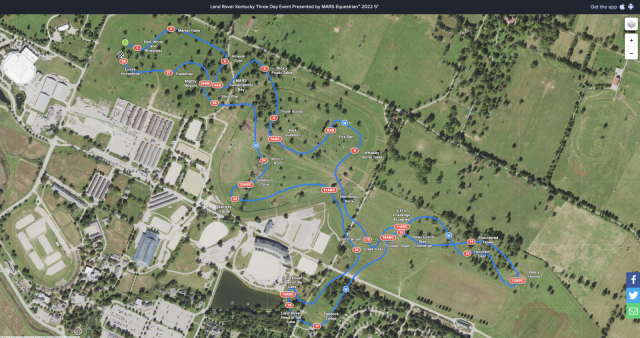 Click the image to view the full, guided course preview.

The first major question on course comes at fence 4AB, the MARS Sustainability Bay featuring a big log into the water followed by a left hand turn to a corner. After two more rhythm fences comes the Park Question — perennially one of the more influential questions on course — at 7ABC. “We’re seeing this much earlier this year than usual, and it comes after a couple of big, galloping, gimme fences,” Derek described on his guided course preview with CrossCountryApp. “It’ll be a pretty big adjustment to come back for this, which begins with a MIM-ed upright set of rails. They’ll land on a downhill slope to the ditch, and then ride back up a slope to the angled brush, so a great line, the right canter, and plenty of commitment is key. There’s a long route here, but anyone intent on being competitive will be going straight here.” 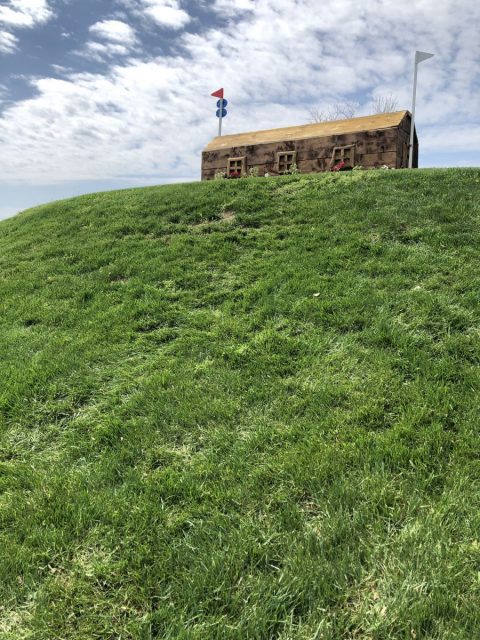 When we say steep, we mean STEEP. The landing side of Fence 13A Pete’s Hollow measures 22 Chinches from the bottom to the apex of the hill. Yeah, we measured. Photo by Abby Powell.

Pete’s Hollow comes at fence 13ABC this year and features a steep downhill after the jump in that will feel “like jumping into space”, followed by a left-handed corner and a left-handed, uphill climb to a narrow box.

The Land Rover Head of the Lake also has a new look this year, with riders approaching it on the far side whereas they jumped in on the opposite side in 2021. The gentle downhill leading to the rolltop in should ride fairly confidently, and riders then have a long gallop across the water and up a steep incline to a brush, followed by a left-handed corner and a big brush corner in the water at element B. 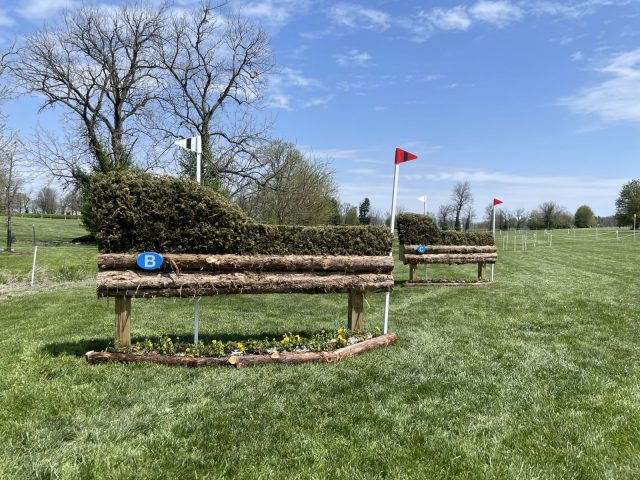 These sharply angled brush fences with challenge riders are they leave the Cosequin Cove. Photo by Sally Spickard.

The final water at fence 23, the Cosequin Cove, seems to be a question that might pose some issues due to its late positioning on the course. After a drop into the water, riders will only have a handful of strides to gather themselves and hold their line to a very steeply angled pair of brushes. This will be a question where a tired horse off the bridle will be likely to have a runout here — a heartbreaking occurrence this close to home, especially if you’ve gone clear to this point. And if you make it through this, you’ll only have a few seconds to think about the yawning ditch in front of a skinny rolltop that awaits at fence 24, the Ditch n’Roll.

But once you’re past 24, you’re very nearly home — just one combination, the Mighty Moguels at 26, stand between you and the coveted finish line — this question is a narrow box to a narrower wedge, so not a gimme.

As of this time, the weather forecast on Sunday calls for scattered thunderstorms, so in all likelihood we can add weather as another contributing factor that will have riders making sure they have their plans and their instincts in check as they head out of the start box. Cross country will begin at 12:50 p.m. EST on Saturday following the 4*-S — you can view more information in our Ultimate Guide here.

And if you are here at Kentucky and want to take a spin around with us, you can join us at 4:45 p.m. EST this afternoon (Friday April 29) for our walk in partnership with Ride iQ and Hound & Hare, led by Kyle Carter and Buck Davidson.