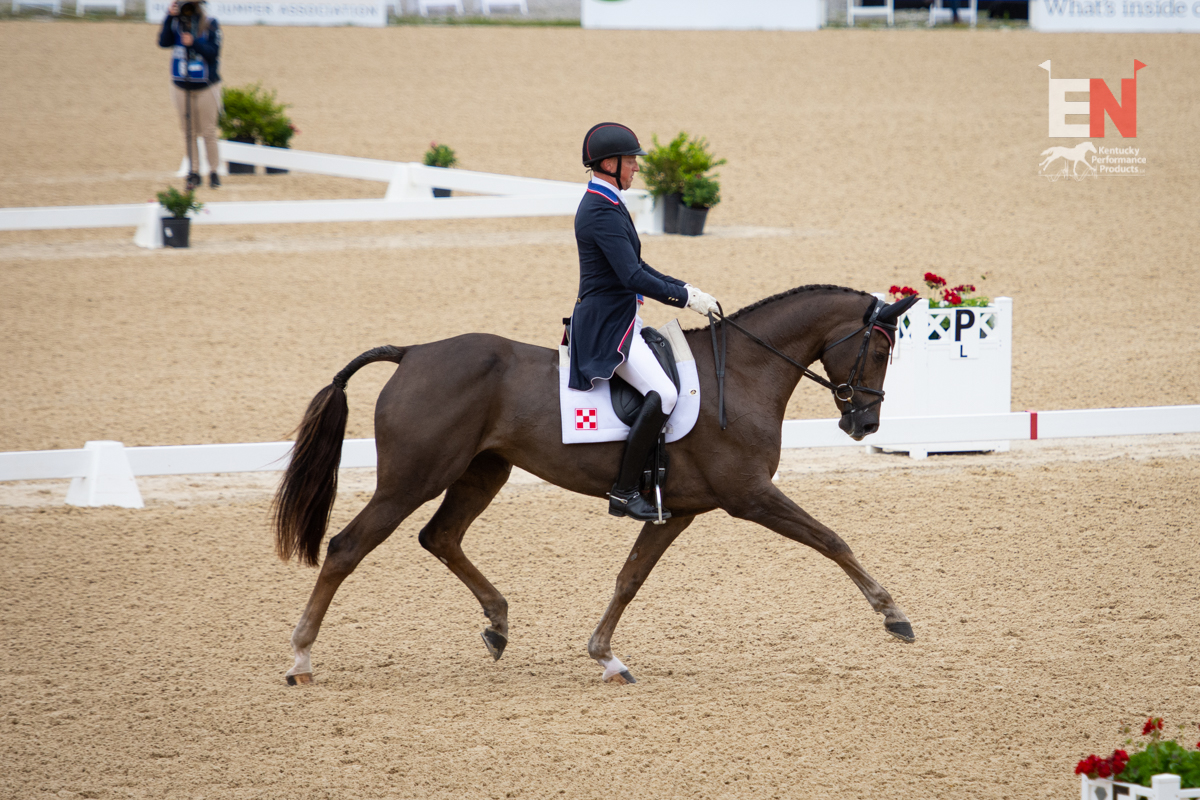 The deliciously expressive Starr Witness put on a show this morning to grab a decisive lead in the CCI4*-S class with Doug Payne.

The Dutch Warmblood mare (Chello III x Carmen), who Doug rode to Pan American team gold in 2019, has managed to get stronger and stronger in the first phase, but Doug says she still hasn’t peaked yet despite today’s 23.2 earned from judges Peter Gray and Bea di Grazia.

“[It was] Pretty damn good. Of course you can always look back and see spots where you potentially gave up a point or two, but she’s just barely getting there really,” he said. “She’s done three or four longs so after Tokyo. I didn’t feel the need to have to run one in the fall, so we spent a bunch of time doing flatwork and jumping a bit and I think that’s paying off now. She’s getting stronger and more confident.” 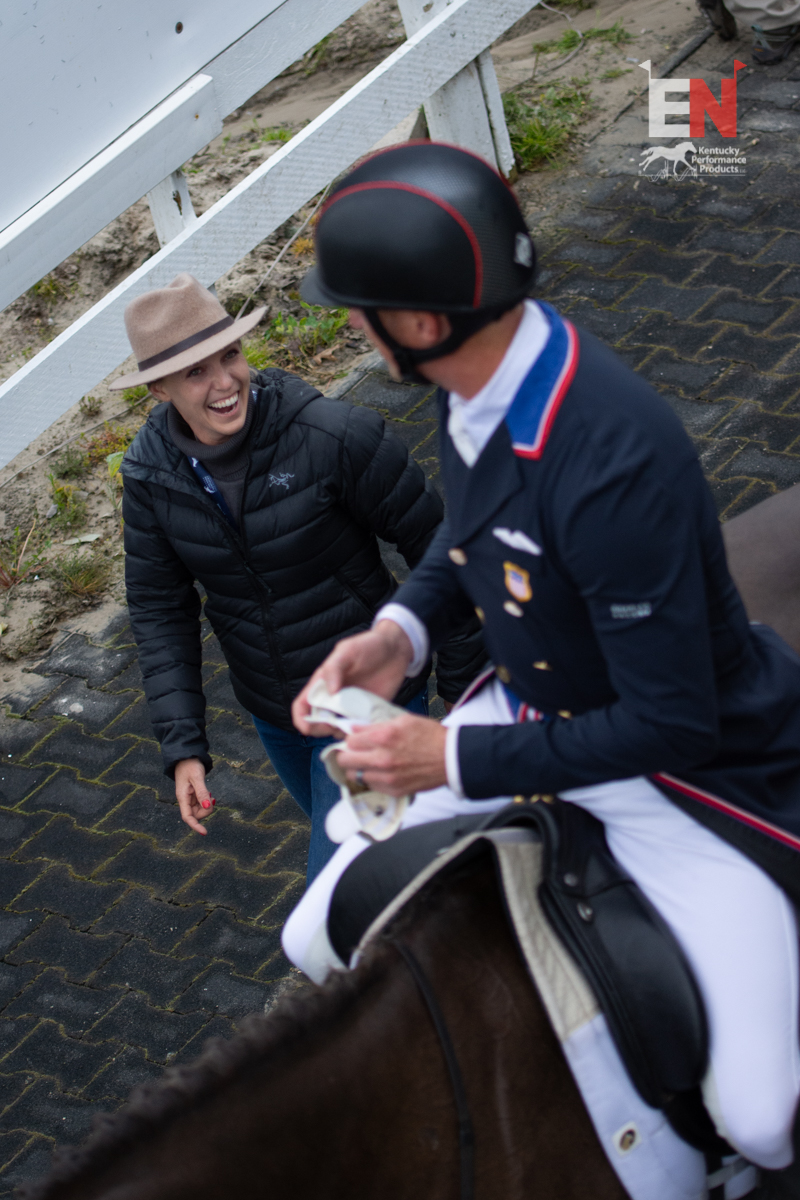 Son of Olympic judge Marilyn Payne, Doug has the advantage of having his mother here watching and supporting him, and she was singing the mare’s praises in the mixed zone. “I thought it was phenomenal. I was watching it, and I score all the tests as they go no matter who it is, and I was thinking, ‘wow that halt had to be and eight’ so I was not surprised at all at the score. Obviously I was delighted with the horse that’s the best and most consistent I’ve seen her go and she can get better, which is really exciting,” she said.

Canada’s Colleen Loach produced a brilliant test with Peter Barry’s Vermont (Van Helsing x Hauptstutbuch Hollywood) that dropped them in a very valuable second-place position. Their result of 24.5, their best International score to date, riled up the growing grandstands which will continue to fill as the day goes on. 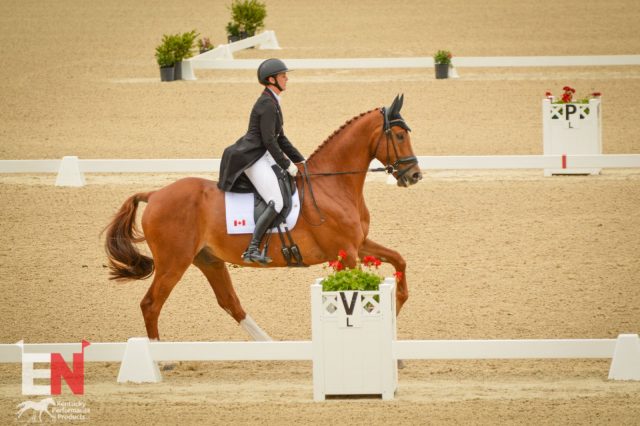 “He was a little bit on the muscle, a little up today with the atmosphere but he stayed with me in the ring and really listened and stayed focused on me so I was really proud of him,” she said “I put a little bit of pressure on myself going in there because I knew he could be right up there in first or second or top ten. It paid off and he came through. I think I rode him somewhat well!” 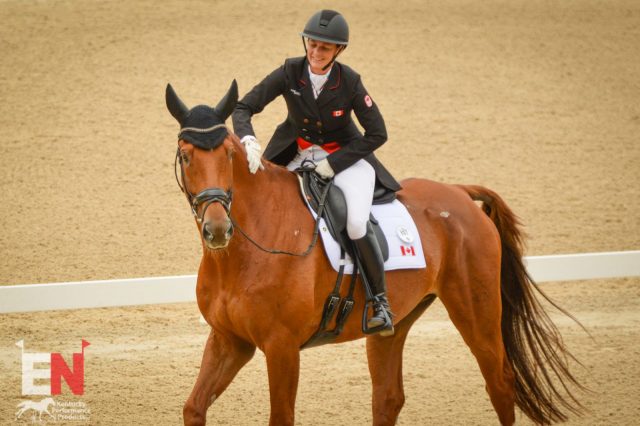 “Is that applause for me??” Colleen Loach and Vermont. Photo by Abby Powell.

Overnight leader Liz Halliday-Sharp holds on to third place with Cooley Quicksilver and fifth with Cooley Moonshine, but Friday added her third ride to the mix, The Monster Partnerhip’s Cooley Be Cool (Fortunus x HHS Carlotta), for sixth place on a 26.9. 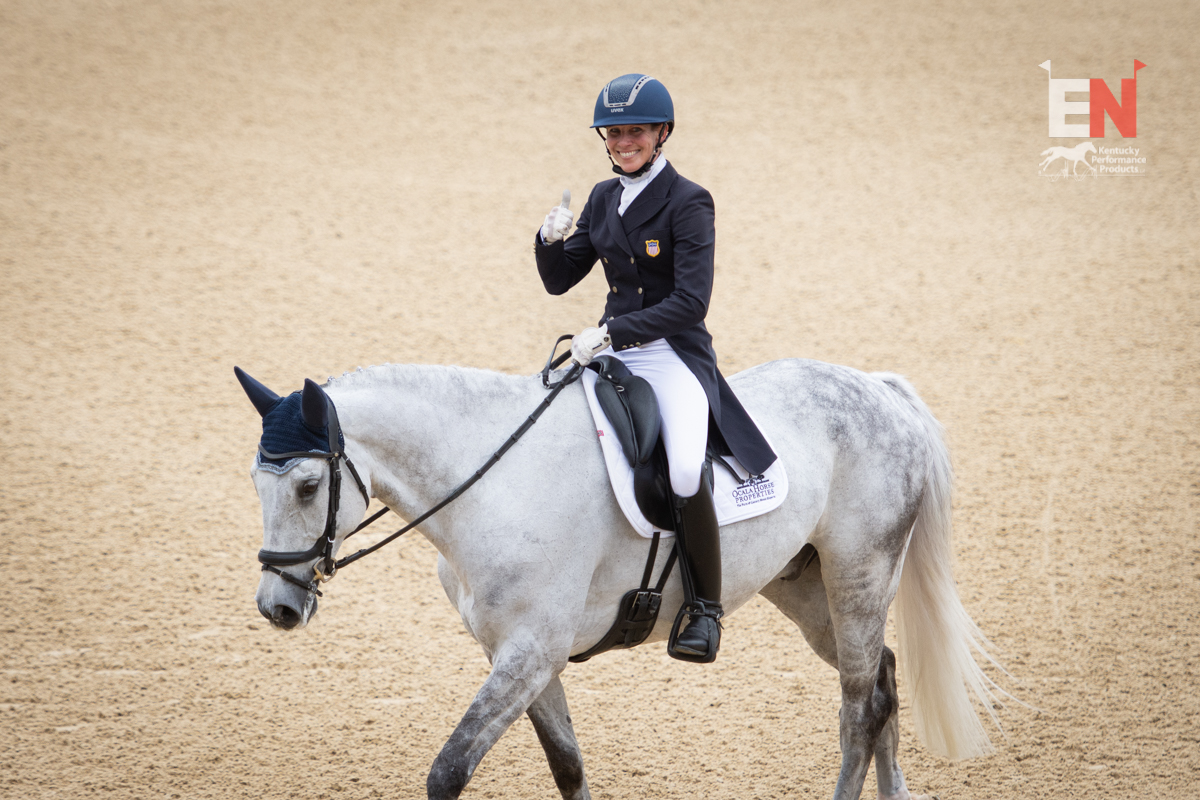 Liz Halliday-Sharp and Cooley Be Cool. Photo by Shelby Allen.

Brandon McMechan was elated with his and Glenn McMechan’s Oscar’s Wild (Whiskey Wisdom xx x Ram xx) after the first phase. His cheer was well deserved as the two 27.3 — a four-star personal best — for seventh place.

Kevin Keane and Sportsfield Candy (Condios x Angel of Harlem) are eighth on 28.5.

These competitors take off over Derek di Grazia’s beefy track that some have called a “five short” tomorrow with the first horse out at 8:00 a.m.

“It’s a wonderful course — quite a bit different,” said Doug. “I think the overarching generalization is that it’s a touch softer, but that said I think the coffin is wicked hard and I think the Rolex Grand Slam water is also going to be a huge challenge so I would actually expect to see a whole lot of problems at both in which case statistically it might end up being on par with last year.”

Colleen concurred. “I would agree with Doug, it’s a completely different track. Walking-wise maybe a touch softer but we’ll see how it rides … it’s challenging enough but kind to the horses and I can’t wait to get out there.”