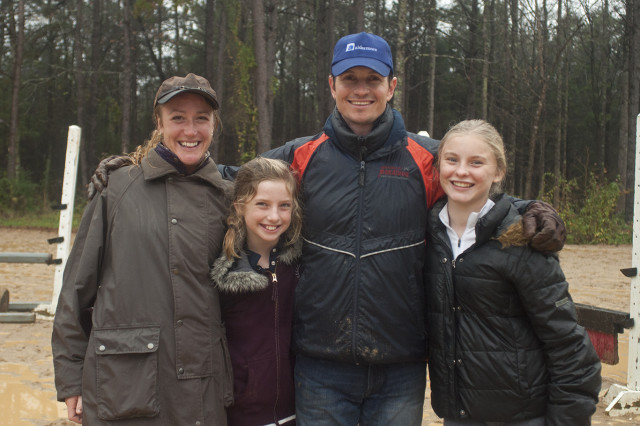 Saturday was meant to be show jumping schools in Kelsey’s grass field, but overnight rain and thunderstorms forced the group to move down the road to a sand ring at Fabián Herrera’s FH Equestrian. Starter through Training level riders enjoyed Francis’ engaging teaching style.

When you have fun, you remember

The rain fell steadily throughout the day, and the temperatures hovered around the low 50s. The conditions were fairly miserable, to be honest. And yet, everyone was smiling. Francis encouraged a positive and fun atmosphere that capitalized on the learning process. He believes that when the riders, horses and spectators are having fun, they better remember the things they learned.

“I think it’s really important when we’re learning that our brain needs to be open. If we are having fun, we are more open to what is being told to us by the person delivering the message,” Francis said. “Each individual picks up information and learns in a different way. If we’re having fun, we see their personality coming through. It helps then to read them as an individual and be able to put the information across in a way that is relevant to them.” 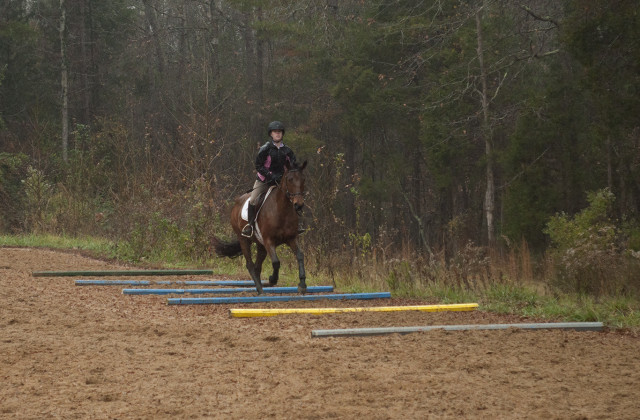 Emily Gray and her pocket rocket mare, All That Jazz, work over ground poles. Photo by Leslie Threlkeld.

Riding in clinics, especially clinics taught by big-name riders like Francis, can be intimating. If students are relaxed, he said, they can better absorb the information and do what the clinician asks.

“The brain won’t be so clouded by the anxiety that can sometimes be associated with riding in a clinic or just riding in general. So when I’m doing clinics like this, it’s important that everybody connects with the clinic. Everybody is there together and everybody is having fun. It’s about having a good atmosphere, a good feeling within and around the arena.”

The pyramid of rhythm, balance and control

Francis’s lessons revolved around three points: rhythm, balance and control. He puts one on each corner of a pyramid (below left). Each component has additional levels to build upon, and eventually Francis’s pyramid looks very much like a simplified version of the traditional dressage training pyramid (below right). 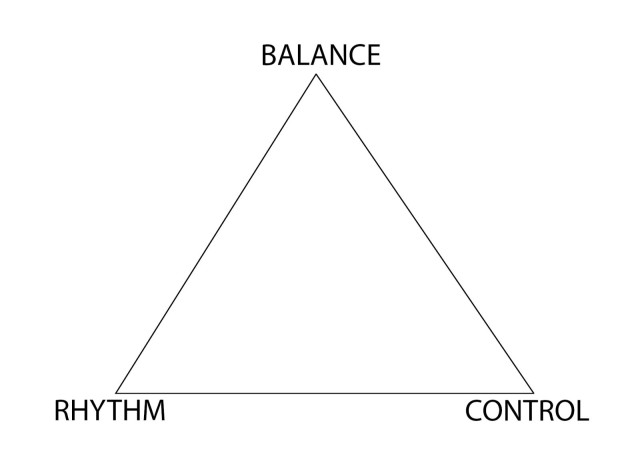 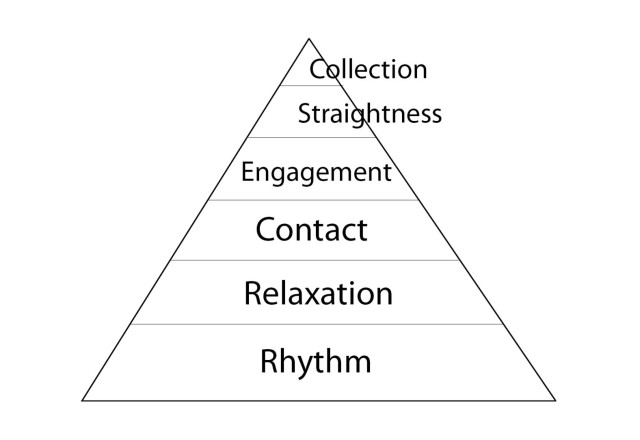 Balance, rhythm and control are the three main tools that Francis uses in his own riding, as well as instruction. The goal is to have at least two at a time at all times. “It doesn’t matter which two you have, you can always get the third,” he said.

Francis set up a course that required riders to practice these three components: six canter poles along one side helped to establish a rhythm and balance; tight, sweeping turns had to be met with balance and control; control and rhythm had to be maintained between related fences. 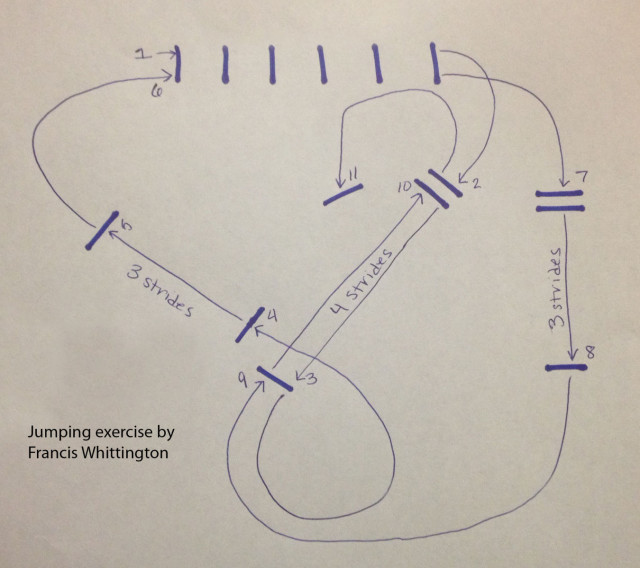 All levels rode this course (not drawn to scale) with jump heights adjusted accordingly. Crude drawing by Leslie Threlkeld.

The most common problem during this clinic was the horse not moving forward to the contact, meaning the horse lacked engagement with the hind leg and could not properly carry itself, Francis explained.

“I used the canter poles to establish the canter stride, to get the rider riding forward and helping the horse to take the step forward before riding through to the turns,” Francis said. “By having the course set so that we’ve got tighter, sweeping turns, we’re creating the engagement, but they have to control and balance that outside rein and stop the outside shoulder from drifting.”

Stop riding to a distance

Francis freely admits that he doesn’t walk distances. Instead, he rides the canter, which is a phrase we hear all the time, right? But what does that actually mean? Francis equates it to baking.

In other words, if you have the core components that get you to the fence (balance, rhythm and control) and you’re within the horse’s scope, you can’t “miss.” The higher up the levels you go, the smaller the margin of error becomes, but at the lower levels, your concentration should be on a quality approach instead of hitting the bullseye.

Taking off anywhere between A and B is theoretically doable. Image not drawn to scale.

“If you have a good canter and balance, you can jump pretty much any fence from anywhere. Have the confidence to believe that,” Francis said. “Generally speaking, when you canter to a fence, you’re not going to be more than a yard or so wrong. Relax and maintain the rhythm. If they can maintain the rhythm and keep the balance through the turn, they’re generally going to get to a fence with a canter that they can jump from.”

When learning to ride or training a horse, incremental steps that build upon one another are key. Sometimes you have to take a step back to address an issue before moving on. Going too far and leaving “holes” in your training can be disastrous.

A symptom of one thing may be a symptom of another and another, and eventually you’ll find the root of the matter, which is the actual problem. Francis is determined to locate the problem and fix it, not patch up a symptom. And the problem, he said, is usually something very basic. 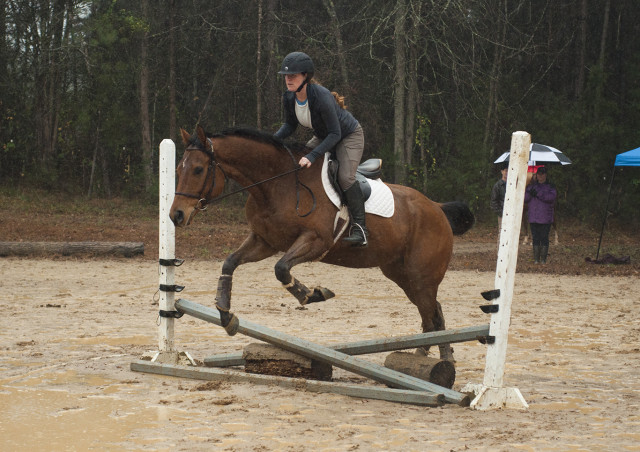 Brittany Vuong and Nico, a CANTER horse (My Dream Catcher) just six weeks off the track. You might recognize him as one of EN’s OTTB wishlist horses! Brittany said he is like riding a cloud. Francis worked with Brittany on making her Thoroughbred more reactive off the leg. Photo by Leslie Threlkeld.

Say, for example, you’re having trouble riding in a straight line because you can’t control the horse’s shoulder. You can’t control the shoulder if you don’t have impulsion. And you can’t have impulsion until you have contact. “If you work it back like that it keeps it simple right down to the basic foundation again, and it might be something as simple as the horse isn’t off the leg.

“The inability to control that shoulder down to a fence could come from the fact that the horse isn’t reactive off the leg; therefore, it isn’t stepping through and balancing. A horse can’t be balanced if it is not engaging a hind leg.”

So if all you ever do is try to correct the symptom of controlling the shoulder to ride in a straight line, you won’t ever correct the problem of a lack of engagement, which can snowball into bigger issues. “You’ll be forever chasing your tail trying to correct it,” as Francis put it.

Next, Francis and his riders will head out to cross country at the Gibbes Farm is St. Matthews, North Carolina, where they will put into practice what they learned thus far. So stay tuned for Part II!