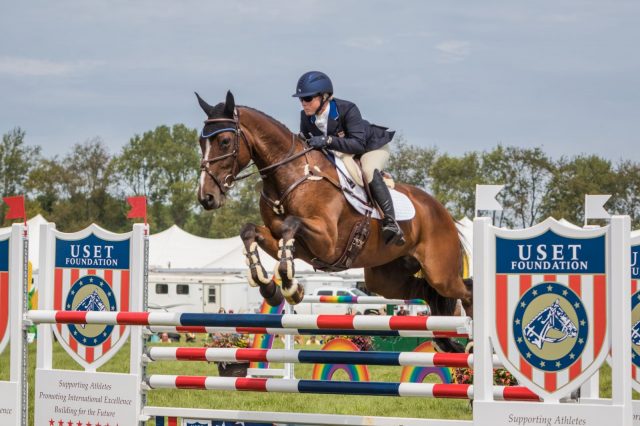 It’s a good feeling to know your horse loves his job, and there is no doubt in Colleen Rutledge’s mind that her homebred Covert Rights does. After injuries sidelined the 11-year-old Thoroughbred/Clydesdale for parts of the last two seasons, he returned to the three-star level with enthusiasm at Richland Park Horse Trials and produced a brilliant win, leading from start to finish and ending on his record dressage score of 33.3.

“He was fantastic. He was full of himself and ready to roll. He was so happy to be doing this again and it was evident how much fun he was having,” Colleen said. “All I can hope is he stays feeling this good and fit and elastic and happy doing his job (in the lead up to Fair Hill).”

Having a draft cross competing at the top level of the sport may seem unusual, but Colleen feels that his breeding (BFF Incognito X Let’s Get It Right, by Covert Operation) has benefited him greatly.

“I’ve ridden a number of Clydesdale crosses and they were all athletic horses. For whatever reason as yearling I said CR would be four-star horse. Everyone said I should sell him as show hunter because he’s a good mover and too laid back. I said I think there’s more in here than most people realize. I love that he proved me right,” Colleen said.

“It’s the Clydesdale part that makes him really rideable, given him a little bit more suspension in his trot and it’s given him that little bit of character. His mother is incredibly smart and his dad smart but laid back. He’s a brilliant mix of the two of them. He’s laid back but fairly confident in himself and that has let us go as far as we have as fast as we have. (His breeding) actually has added what he does rather than subtract.”

CR burst onto the four-star playing field in 2015 and instantly made a name for himself with an 11th place finish at Rolex and later earning 22nd at Burghley. Despite the inconsistencies in his competition schedule due to the down time that followed, he just keeps improving, with three top six three-star finishes in 2016 and a 13th place result at Carolina International this March.

“He’s finally coming into his own. He’s finally starting to get strong and understanding his job better and better. As he gets stronger in dressage he’ll get better there and then stronger and better in show jumping. On cross country, he’s already a blast. I’m excited to see where he will go.” 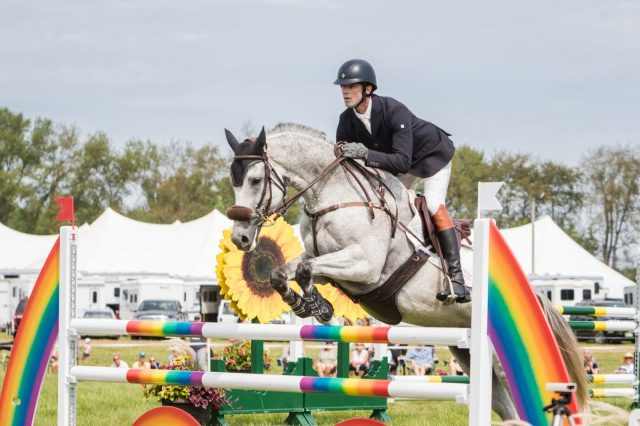 Will Coleman and Tight Lines. Photo by RedBackStock.com.

Will Coleman was aiming for three solid phases with Tight Lines, a 10-year-old French Thoroughbred gelding owned by the Conair Syndicate, and it doesn’t get much better than finishing on your dressage score. After a foot-perfect cross country round yesterday, “Phish” delivered a double clear show jumping round to move up into second place on 40.2.

“He was great all weekend. I came here wanting to put in three good phases and I think we did that. Colleen did as well and she edged me out by a few points but she deserved it,” Will said. “I couldn’t be happier with my horse. I thought he was really solid and I think on a good track right now.”

With Fair Hill CCI3* on the books for October, Will plans to run Plantation Field CIC3* as a final prep. Right now though we know Will is looking forward to completing the long drive home to Virginia and celebrating with his wife Katie and their new daughter, Charlotte. “We hit the road as soon as we could after we took care of the horses. We’ll get home early tomorrow morning and I’ll get to spend some time with my family.” 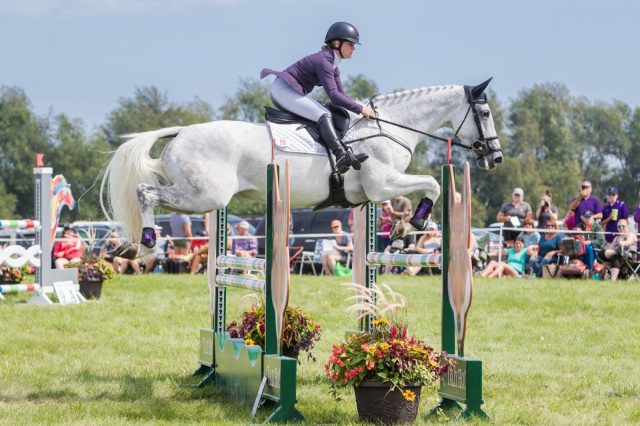 Katie Ruppel and her own 13-year-old Thoroughbred Houdini were second after dressage on 39.8. After falling off during her first CIC3* round she pushed through the pain and, with a little help from her longtime equine partner, produced a fault-free round to hold their position on the scoreboard. A single-rail round today dropped them barely outside the top three to finish fourth on 43.8.

A Michigan native and having grown up in Area 8, Katie decided, along with her parents Chris and Patty, to pay forward the support she received from the community as an up-and-coming Young Rider and sponsor the new Richland Leg Up Award, given to the lowest scoring Area 8 Young Rider in any Preliminary division at Richland Park.

The winner of the inaugural Richland Leg Up Award is 15-year-old Bailey Hennings of Valley City, Ohio. Bailey has been riding since she was a child and eventing for six years. Competing in Preliminary Rider at Richland, she finished in the ribbons with her horse Miss Demeanour, a 7-year-old OTTB with AP Indy breeding that she’s had since last October.

Bailey and Miss Demeanour just moved up to Preliminary with the help of coach Waylon Roberts. Bailey’s immediate goal is to move up to the one-star level and this award will help her to achieve this goal with a plan to enter at the Ocala Jockey Club in November and work with Katie to prepare.

As the winner of the Richland Leg Up Award, Bailey will receive $1,000 and one free week of training and accommodation with Katie at her base in Anthony, Florida. Katie and her parents want to thank Richland Park organizers Bob and Kay Willmarth for a spectacular event and being the platform for this award. 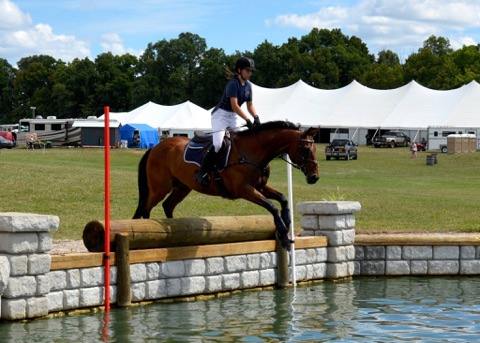 Emily Beshear and Deep Purple Eventing’s Silver Night Lady, an 11-year-old Irish Sport Horse mare, hovered outside the top three of the CIC3* all weekend. A double clear round today boosted them to third place, with only 2.4 time penalties from cross country to add to their initial score of 41.0.

Boyd Martin and Christine Turner’s 10-year-old Trakehner Tsetserleg also finished on the optimum time on cross country. They added no penalties in stadium today to finish on their dressage score for sixth. Joe Meyer and Clip Clop, a 14-year-old Irish Sport Horse owned by Joe and Madison and Theresa Foote, were double clear today for a seventh place finish on 53.9, which is the exact same score they earned at this event last year.

Alexandra Knowles and the 15-year-old Thoroughbred Sound Prospect, owned by Sound Prospect LLC, were ninth with a 55.8 final score. Jenny Caras and her 13-year-old Irish Sport Horse Fernhill Fortitude round out the top ten on 61.0, dropping from sixth with an unfortunate 12-fault round today. 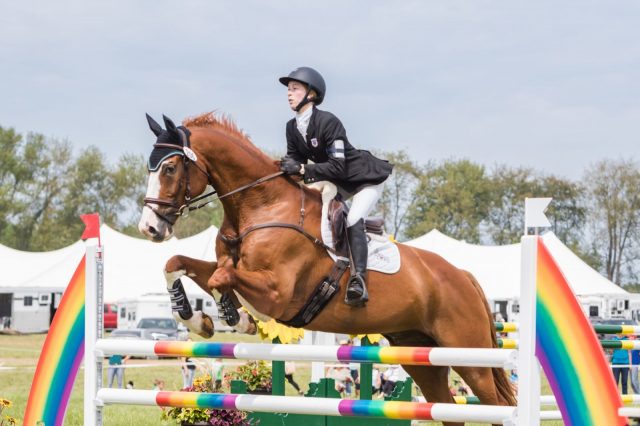 Buck and Copper Beach, Sherrie Martin and Carl Segal’s 11-year-old Irish Sport Horse, won the second annual Phillipa Humphreys Advanced division, leading from the start and adding only one rail to their score today to finish on 32.2.

NAJYRC CICOY2* silver medalist Cornelia Dorr made the big move up to Advanced at Richland this weekend with Louis M. The 12-year-old Rheinlander gelding was previously campaigned at the three-star level in Europe by German rider Pia Münker, and Cornelia has never understated what a great teacher Louis is for her. They finished second in their first Advanced with a 38.4 final score. Well done!

“I feel really pleased about how this weekend went, but I know that I have just only dipped my toes into the waters of Advanced level! I have much more to learn and experience,” Cornelia said.

Boyd Martin and Long Island T remained in third place after show jumping to finish on 43.6. Erin Sylvester and Mettraise moved up from eighth after dressage for eventual fourth on 51.1. Lindsay Beer and El Paso round out the top five on the same score.

That’s a wrap on another wonderful edition of Richland Park Horse Trials. Thanks for reading! We’ll be back shortly with reports from Millstreet and Blair Castle. 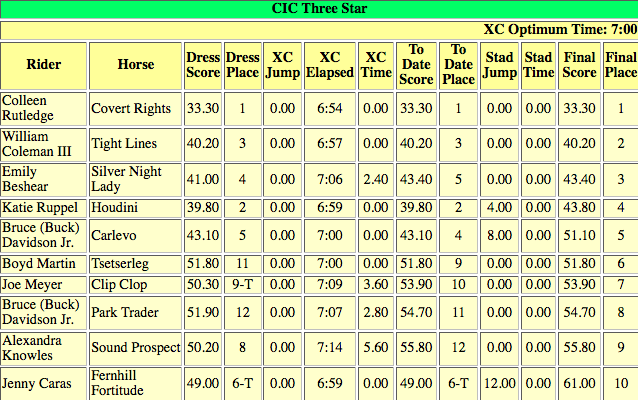 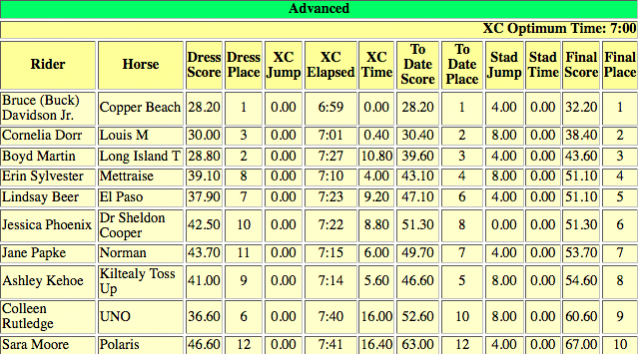