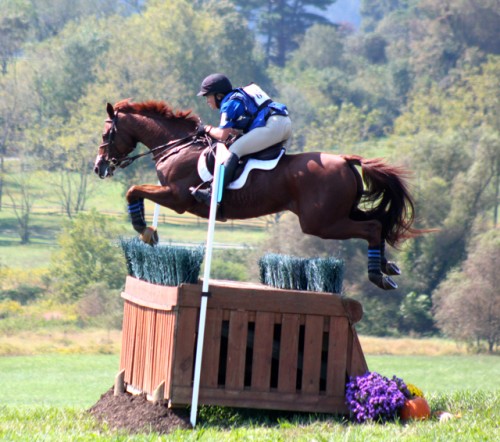 Colleen Rutledge had several horses competing at Morven Park this weekend and appears to have suffered a fall today. A quick look over the live scores suggests that it was from Siren’s Call in the Preliminary Championships. While the fall does not appear to be serious, we hope she is recovering well and will be back in the saddle in no time.

Before word gets out anywhere else on the internet. Colleen had a fall today at Morven Park and got taken out in an ambulance she is not in pain and they think she has a dislocated hip. I’ll update after X-rays are done. Just didn’t want the wrong information put out there anywhere. She was smiling and ok.

Best wishes to Colleen for a speedy recovery!

Update: Unfortunately, the X-rays showed that Colleen’s hip is fractured, and she’s now facing surgery in the next couple of days. It’s a huge blow to Colleen, as she was preparing to compete her superstar homebred Covert Rights in his first CCI3* at Fair Hill in two weeks. The EN family sends our best wishes to Colleen for a full and speedy recovery.

Ok update after the X-Ray was done and I really wish I had better news to give. So when the hip came out of socket there was so much pressure from the horse rolling over on her it fractured some of her socket off. She is getting transferred to Inova Fairfax where she will have surgery in the next day or two. She will not be able to put pressure on her leg for the next three weeks and she will be out of the saddle for about a month and a half maybe more. Her season is over for the year so no Fairhill or Virginia 1* for her. I’ll keep everyone updated as much as I can.