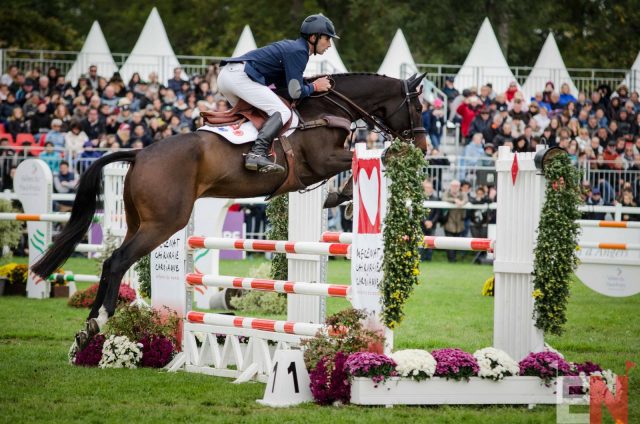 Astier Nicolas makes good on his comeback from a broken knee, winning with seven-year-old class aboard Alertamalib’or. Photo by Tilly Berendt.

We all put our own riders up on a pedestal in international competition, but nothing can rival the French and their unerring enthusiasm for the cavaliers who wear the tricolour. Le Lion d’Angers has been packed with spectators throughout the competition, but emotions reached a fever pitch during this afternoon’s showjumping finale for the seven-year-old World Championship.

The margins couldn’t have been any tighter at the top, with overnight leaders James Avery and Vitali unable to add a single time penalty if they wanted to maintain their position and just over a rail separating 1st place from 10th.

Sometimes the final day of an event plays out as you expect it to, sometimes the leaderboard gets turned upside down, given a jolly good shake, and set upright again. This was one of those days. No one could quite predict where, exactly, the problems were going to happen, but happen they did, with a rainy and tense game of pick-up sticks playing out through the afternoon.

Two riders had unfortunate falls on course: British rider Alice Pearson took a tumble from Jack the Ginger, despite very nearly pulling off a spectacular save, and French rider Jean Lou Bigot, who had been sitting in eighth place with Aktion de Belheme, was jumped out of the saddle – although he still left the arena to uproarious applause from his dedicated following (which seemed to be, if I’m honest, most of the country).

To put up a double clear proved both rare and incredibly valuable, with six of the day’s eight DCs propelling their horses and riders into the top ten. On the other hand, any mistake proved catastrophic, with major players tumbling out of contention. When Astier Nicolas and Alertamalib’or delivered a fast, clear round, the atmosphere began to reach fever pitch. He lay fourth going into the final phase, but as had been proven throughout the afternoon, all could – and would – change. 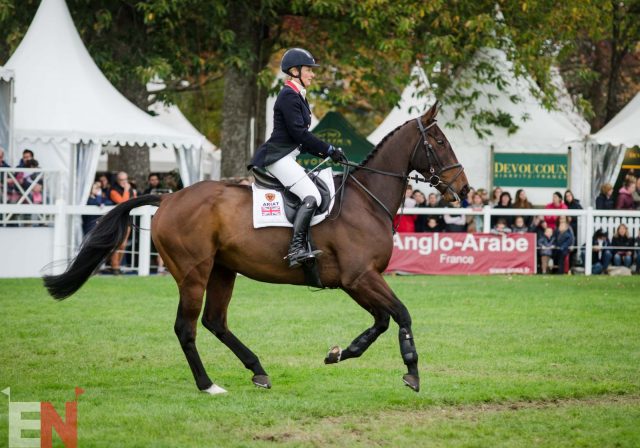 Mary King and her homebred King William fall victim to the tricky final phase, slipping from 2nd to 21st. Photo by Tilly Berendt.

In second place before the final phase, Mary King and King Robert saw the most dramatic reversal of fortunes, pulling all three elements of the treble and the final fence, and adding three time penalties to drop 19 places to 21st. 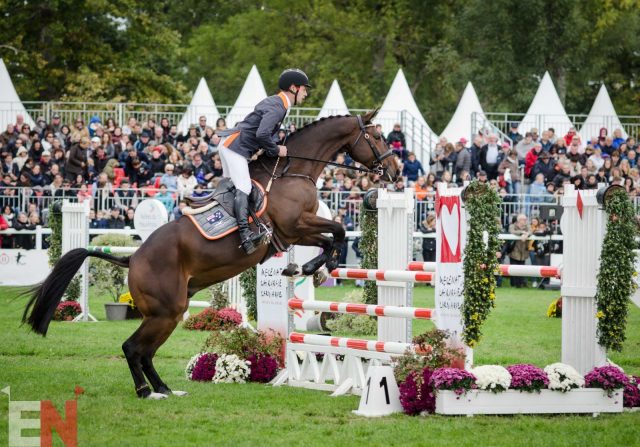 Chris Burton and Lawtown Boy also slipped out of the running, with two poles and three time penalties moving them from third to 11th. 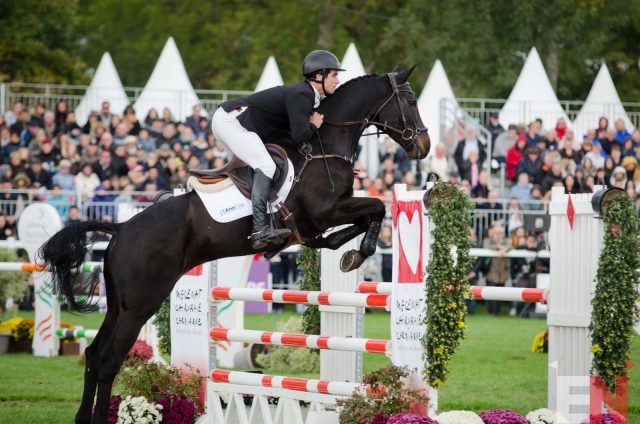 Not their day: leaders James Avery and Vitali give up their crown in the final phase. Photo by Tilly Berendt.

Kiwi James Avery and Vitali had led throughout the competition, but with a 25% showjumping clear rate this season, they would have to work hard to make it home clear over the testing track. It wasn’t to be: they pulled a rail, and the instant screams and cheers of the crowd threw the young horse’s concentration for a moment, adding another rail and a time penalty to their score and rocketing them down to sixth place. 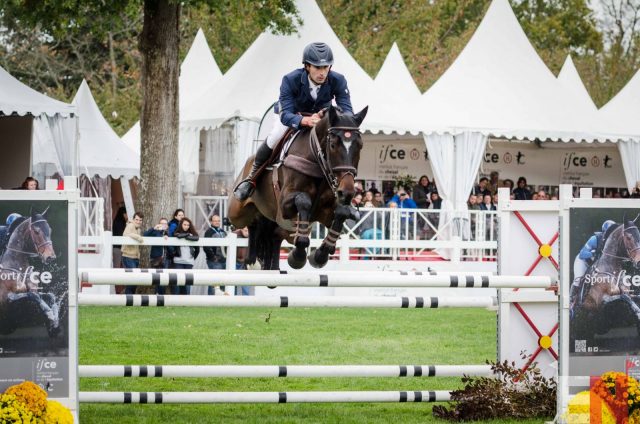 Astier Nicolas proves that time off hasn’t made him rusty. Photo by Tilly Berendt.

For Astier Nicolas, winning at Le Lion this week is about more than an accolade on Alertamalib’or‘s record. Astier has been sidelined for most of the season after breaking his knee in a fall, and while some of his upper-level horses, like Vinci de la Vigne, have been campaigned by fellow countryman Tom Carlile, his younger horses have enjoyed easy summers before being brought back into work.

“They all seem to go better now that I haven’t been riding them – I wonder if I should take some more time off,” he grinned. He admits that he began riding again earlier than his surgeon recommended, saying, “the surgeon was really happy, because everything ended up being fixed very well, but I do have to do intense rehab to try to fix the effects of the injury. But this is exactly what I came back for – I wouldn’t come back for the long and boring winter, so I had to do some exciting things this autumn.” 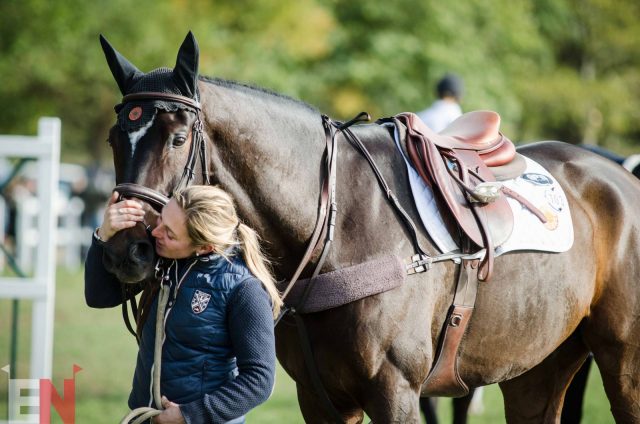 Alertamalib’or: your seven-year-old World Champion, and a big fan of snogs. Photo by Tilly Berendt.

He now heads to Pau – because who wouldn’t want to tackle a CCI4* after only six weeks back in action? – with experienced campaigner Molokai, and today’s win will be a huge confidence boost as he tries to regain his 2015 title. 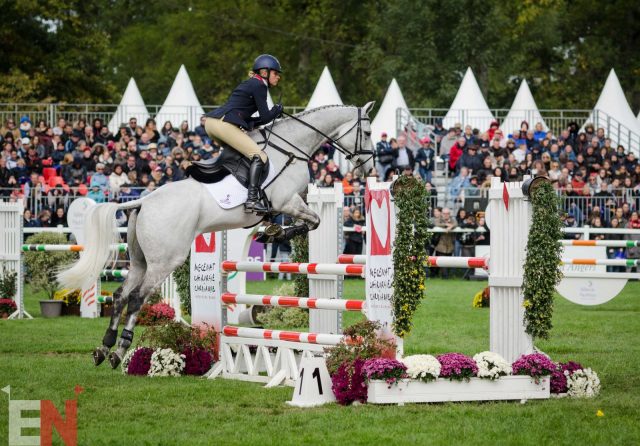 The remarkable influence asserted by the final phase allowed for other climbers – fresh off of her win in the six-year-old class, Izzy Taylor climbed from ninth to second with Direct Cassino, and frankly, if there’s any lorry I’d want to be hanging out in right now, it’s DEFINITELY hers. 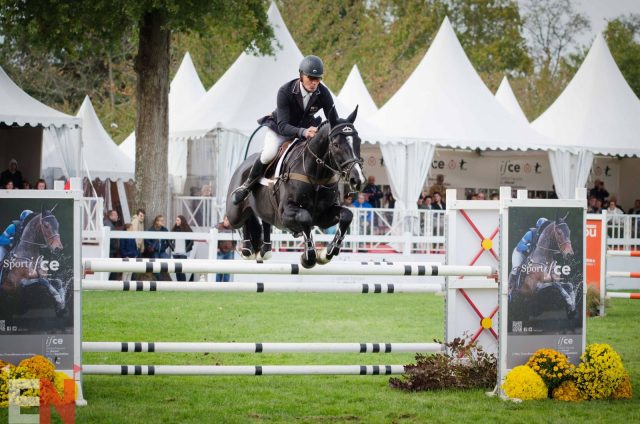 Andrew Nicholson also recorded another great result here, finishing third on Yacabo BK. The Spanish-bred horse comes from one of two breeders in the country, who Andrew sources almost all of his horses from.

“Yacabo was bred by Quimbo and Qwanza’s breeder, and [six-year-old entry] As Is was bred by Nereo’s breeder,” he explains. “I have a great relationship with both of those breeders – I trust them, and they trust me, and now I get nearly all of my horses from them.” Andrew, too, will now go on to Pau with two horses – one of whom, incidentally, is Qwanza. A good omen? I’d suggest it, but I don’t expect Mr Stickability needs omens to get top results.

“Yacabo’s for sale,” he goes on to tell me, although when I ask how much he wants he tells me it depends on if I want the saddle, too, so I am both nonplussed and also sort of tempted to set up a GoFundMe. 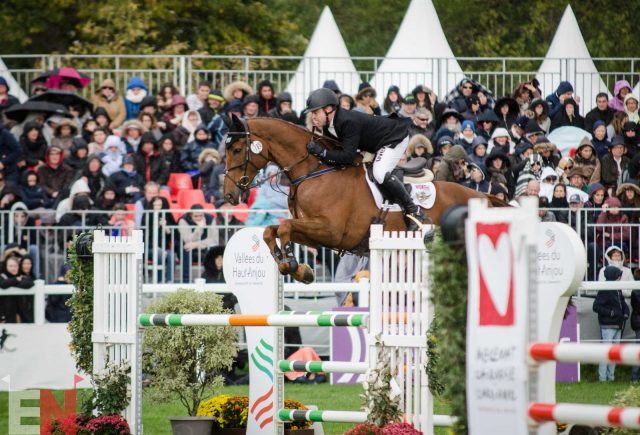 British eventing’s leadership change-around has produced spectacular results so far this year, and their domination of the final leaderboard will only serve to swell the metaphorical coffers of the Great British Rebuilding Project. Taking five places in the top ten, British horses and riders made their presence known, with Gemma Tattersall climbing from 18th with Chilli Knight to seventh and Ben Hobday rising from 20th to 10th with his British Novice champion Shadow Man. Kylie Roddy and Laura Collett rounded out the British offensive, taking eighth and fourth place, respectively.

Beyond the results themselves, this week has been an incredible litmus test for these talented young horses who could go on to greatness, and it’s been an interesting insight into what’s to come. This competition is also a celebration of sport horse breeding, and the Irish Sporthorse Studbook won the top prize for having several well-placed ISH representatives in the competition, including Jesse Campbell‘s I Spye, Elizabeth Power‘s DSL The Entertainer and Jonty Evans‘ John the Bull.

Now we – and several of this week’s competitors – look ahead to the final CCI4* of the year (in the Northern hemisphere, at least – I see you, Adelaide), but watch this space, as I’ll be bringing you some Le Lion bonus features over the next few days. You didn’t really think a French international would go by without any weirdness, did you? 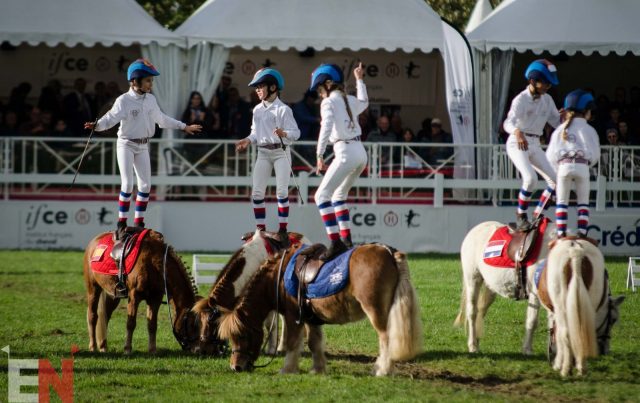 For now – congratulations to our North American representatives, our top-placed riders, and most of all, the very clever baby ponies who make this competition so special. Allez champagne drinking (but not for underage ponies, who may have a celebratory fizzy apple juice instead)!

At the end of all things: the top ten seven-year-olds in the world.