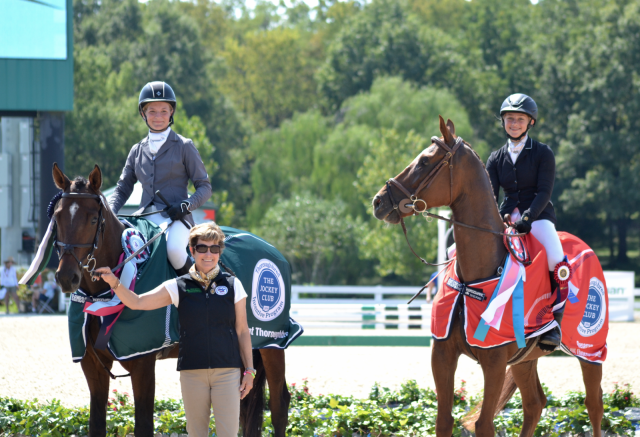 Here’s a fun fact: Of the 949 starters in the 2019 American Eventing Championships, 218 were Thoroughbreds, making up 23% of the competition and outnumbering an other breed by far. With so many top Thoroughbred eventers of all levels gathered up in one place — and that place being the heart of Thoroughbred country — the AEC went hand-in-hand with the Thoroughbred Incentive Program (T.I.P.) Championship, also taking place at the Kentucky Horse Park that weekend.

All proceeds from the New Vocations show will support Thoroughbred aftercare. Between the two shows, a total of 450 Thoroughbreds from 26 states competed.

“I am thrilled with the growth of the T.I.P. Championships since its inception in 2017 and the enthusiasm of all participants toward showcasing off-the-track Thoroughbreds,” said Kristin Werner, senior counsel for The Jockey Club and the administrator of T.I.P. “This weekend showcases the versatility of Thoroughbreds in a wide range of disciplines, and we hope that Thoroughbred-centric competitions will encourage horse owners to consider riding and competing with former racehorses.”

“We are proud to work with T.I.P. to organize a weekend of horse shows that display the ability of Thoroughbreds to excel in careers beyond the racetrack,” said Sarah Coleman, New Vocations’ Director of Public & Community Relations. “We at New Vocations believe that Thoroughbreds have unlimited potential and love seeing this potential turn into results in the show ring.”

The eventing winners and reserve champions for the T.I.P. Championships are as follows (Jockey Club registered names are in parentheses):

In 2019, more than 1,300 sponsored horse shows are offering awards for Thoroughbreds in 42 states and six Canadian provinces and in virtually every imaginable discipline. To qualify for the Championships, a T.I.P.-eligible Thoroughbred must participate in a show offering T.I.P. high point awards, classes, or divisions in the applicable discipline beginning Aug .1 of the prior year through July 31 of the Championships year or participate in the T.I.P. Performance Awards in the applicable discipline. Horses shown at a horse trial or combined test can also qualify for the championships through the show jumping phase. To be eligible for T.I.P. shows, a Thoroughbred is defined as any horse that has been registered with The Jockey Club or a foreign Thoroughbred stud book recognized by The Jockey Club.

Learn more about the T.I.P. program, view participating horse shows, and apply for a T.I.P. number at the website here.