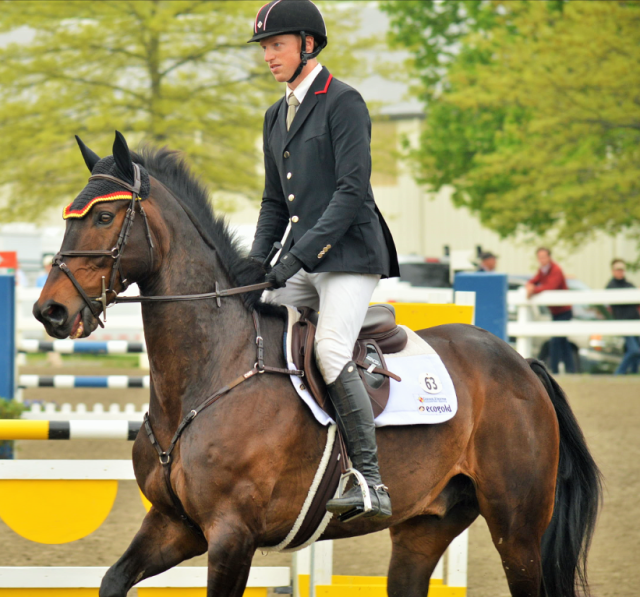 Doug Payne has just announced the sale of one of the top horses in his barn, Crown Talisman, to UK eventer Nick Gauntlett. Doug and Crown Talisman had enjoyed success together at the three-star level, and the horse was slated to compete in his first CCI4* at Pau this fall, thanks to a Land Rover Competition Grant.

Nick Gauntlett is a successful international event rider, and will utilize his wealth of international competition experience to continue producing the 2003 Thoroughbred/Holsteiner gelding.

Doug posted the following statement in his blog:

This is a post I never, in a million, years envisioned writing; however, here I am typing away.

A few weeks back Jess and I met with a good friend and supporter to get some advice about a lot of raw land available for sale just behind the farm which we currently rent. Without much in the way of financial resources the inexpensive acreage looked appealing on the surface. That evening, after checking out the land, we started looking into comparable property in the area to better evaluate our options and the prospects of development. While Jess and I had searched online before, we were shocked to find what appears to be perfect farm. The question then becomes how in the world could we afford it!

Two days later I received a call from Liz Millikin on behalf of Joanne Bridgman (both Agents) asking whether I’d ever consider parting with Tali. My initial thought, was not a chance. After discussing with Jess and sleeping on it, I decided if it meant we could buy the farm I’d have to consider it. A week or so later Nick Gauntlett arrived at our place in Raleigh.

I’m as attached to him as much as I’ve ever been to a horse. He has been with me now for 6 years from his very first event to Saumur this spring. The thought of selling him has literally woke me up multiple times during the past few weeks. However, after speaking to a number of people I respect both in and out of the horse world, I’m confident this is the right decision. Certainly doesn’t make it an easy one!

I’m comforted by the fact that after getting to know Nick, his riding style and care of his horses I know Tali will have a great future. I will always be his biggest fan and hope nothing but the best for the two of them. I’ll be rooting for them at Rio!

We would like to wish Nick and “Tali” the best of luck in their new endeavors, and while we are certainly sad to see a top prospect parted with, we know that the horse will be in excellent hands for his future.

You can read more about Doug and Jess’ new farm in Apex, Nc. via the PRO Blog here.