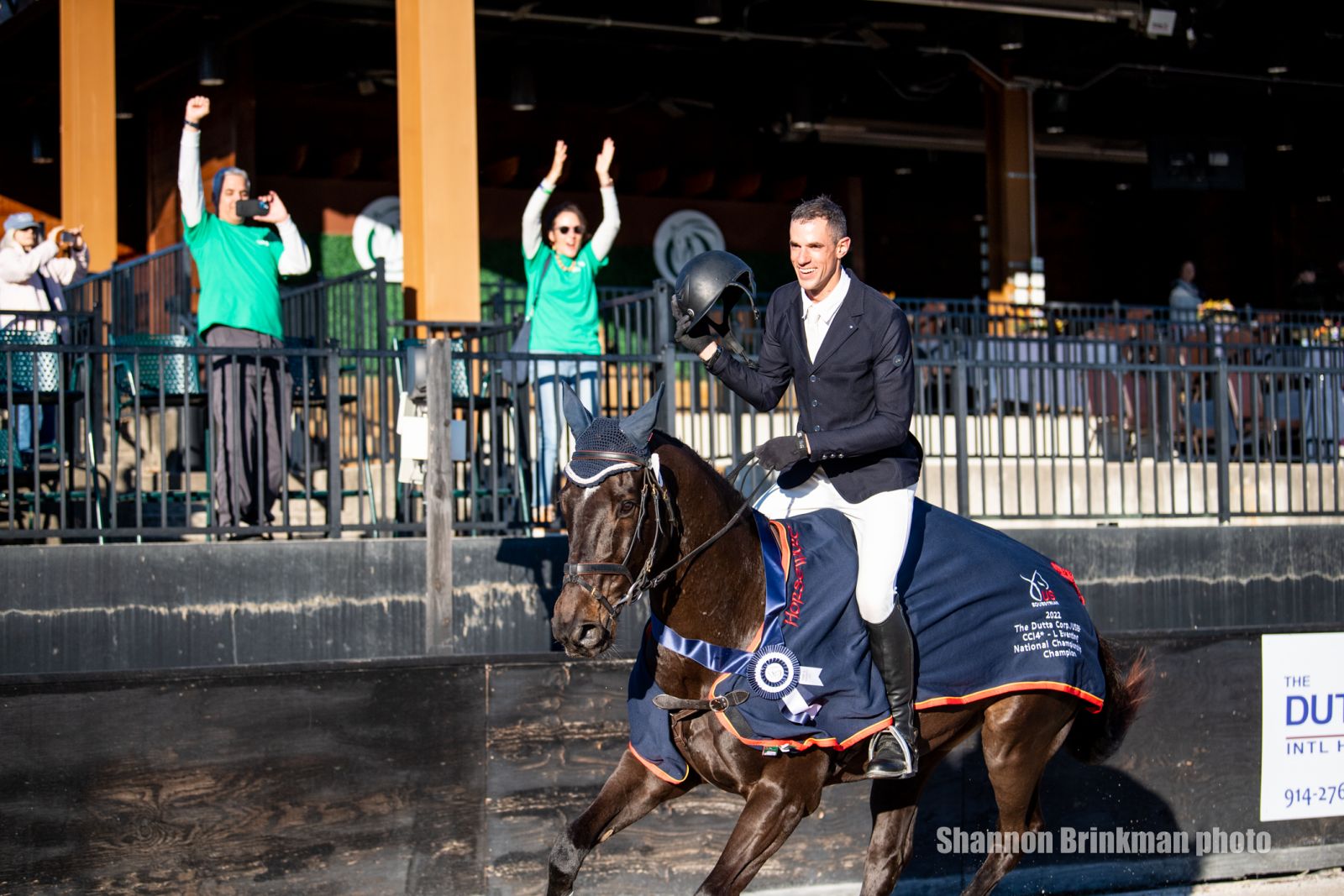 Dan Kreitl does a lap of honor with his green-clad crew from Indiana in the background. Photo by Shannon Brinkman Photography.

It’s not often an amateur tops a major leaderboard in equestrian sport, but part-time eventer Dan Kreitl has done just that in this weekend’s USEF 4*-L National Championship at the Dutta Corp. Tryon International. Partnered with Kay Dixon’s Carmango, who was sourced as a four-year-old by Kai-Steffen Meier, Dan topped the final board despite two rails added in Sunday’s show jumping to finish on a score of 40.0.

When not in the saddle, Dan is a full-time family man alongside wife Alyssa and their two children and also operates a real estate company in his home state of Indiana. Alyssa has battled a rare form of cancer for the past few years, most recently undergoing a successful removal surgery in mid-October, and in more ways than one you can do nothing but admire the resilience and determination of the Kreitl clan. For Dan, achieving this milestone with a horse he’s produced nearly since the beginning is a “pipe dream” come true. 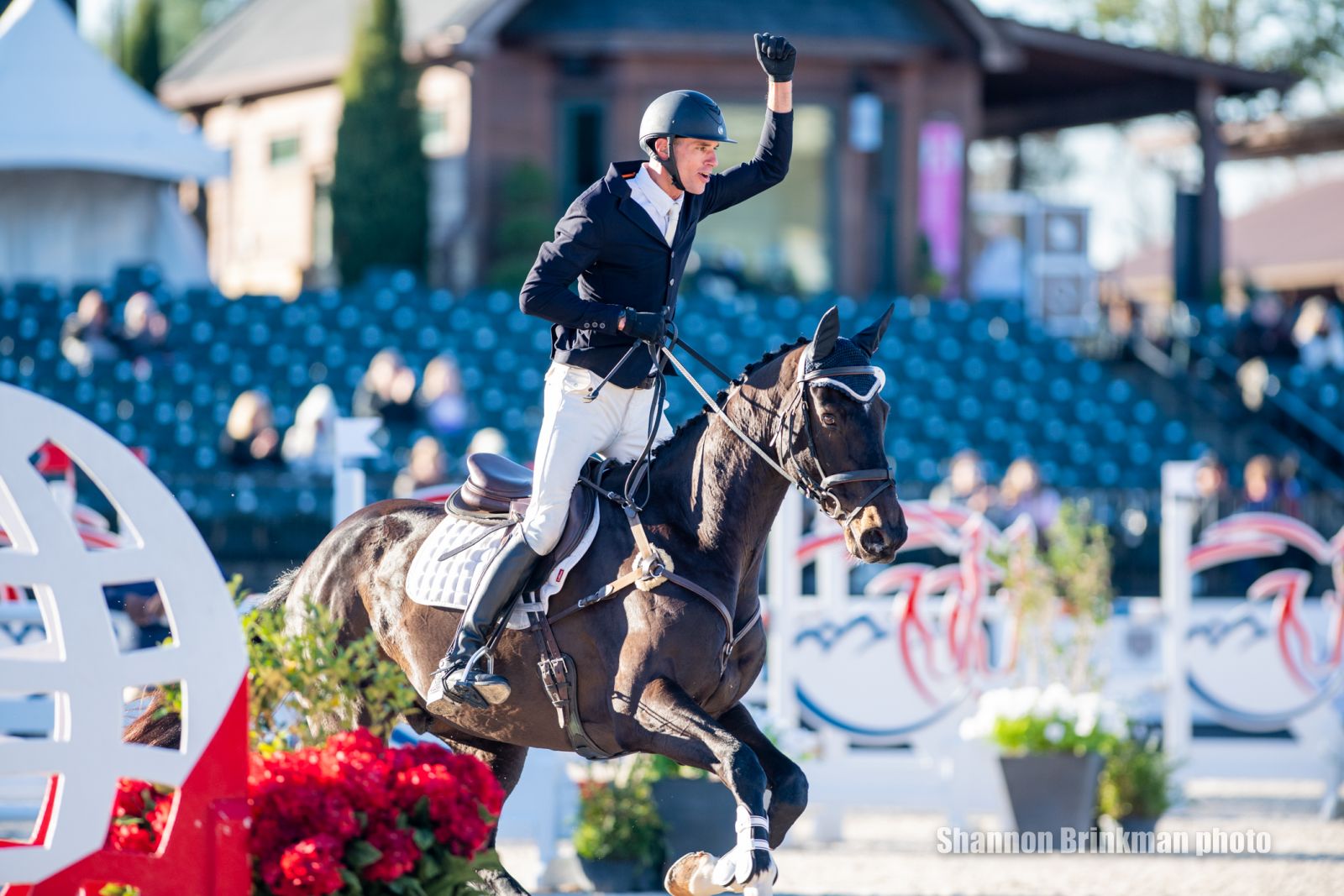 The moment you win a 4* Championship. Photo by Shannon Brinkman Photography.

“This is our first (four-Long), for the horse and I both, and it was definitely challenging enough and took some scrappy riding,” Dan said of yesterday’s cross country, where he made the save of the day at one of the final combinations. “I nearly bit the dust, but I was super proud of the horse — he gave a hundred and ten percent, and I pushed him hard. I was curious how he was going to feel today. And show jumping has never been our strongest phase. But he had a lot of jump and I was thrilled with his fitness and how he recovered today.”

Through the close relationship Dan has with longtime owner and supporter Kay Dixon, and help along the way from mentors such as Sharon White, Dan has steadily made his way to this point. He’s done this in his own way — he chose not to do any FEI competitions with his horses initially, electing instead to build a foundation — and with the idea in mind that above all, he wanted to enjoy this sport he’s come to love. This has been his haven during the trials life’s sent his family’s way. That love of the sport is evident in his riding and manner with his horses, and the way they continually try for him.

“Ending with an epic high with these legends in the sport — as an amateur, I look up to them and think someday I’d love to be able to be up there to win and but [it’s] kind of pipe dream also,” he said. “So it was super fun to actually get to live it out here today.”

Dan’s prize will be a flight grant generously provided by The Dutta Corp. to the winner of the 4*-L National Championship each year. Dan hasn’t quite thought ahead to where he’d like to go yet — “I’ve been in the lead coming into show jumping a number of times and usually don’t end up winning, so it was a bit like ‘let’s just get through this step’!” — but is looking forward to the opportunities this year’s success has brought.

Liz Halliday-Sharp, who finished the weekend second with Ocala Horse Properties’ Deniro Z: “It’s tremendous, especially with a prize like a $20,000 flight grant — it’s outstanding because that’s one of the biggest struggles we have here in the U.S., being able to go in and put the pressure on ourselves to compete against the best over in Europe. And so that’s a real opportunity for someone like Dan, who’s never been over there with his horse. He can now have that chance to go and compete against everyone else who’s so competitive out there. I think our sport is is desperate for big, generous sponsors like this. And hopefully we can keep bringing up the level so that we get more and more people interested.” 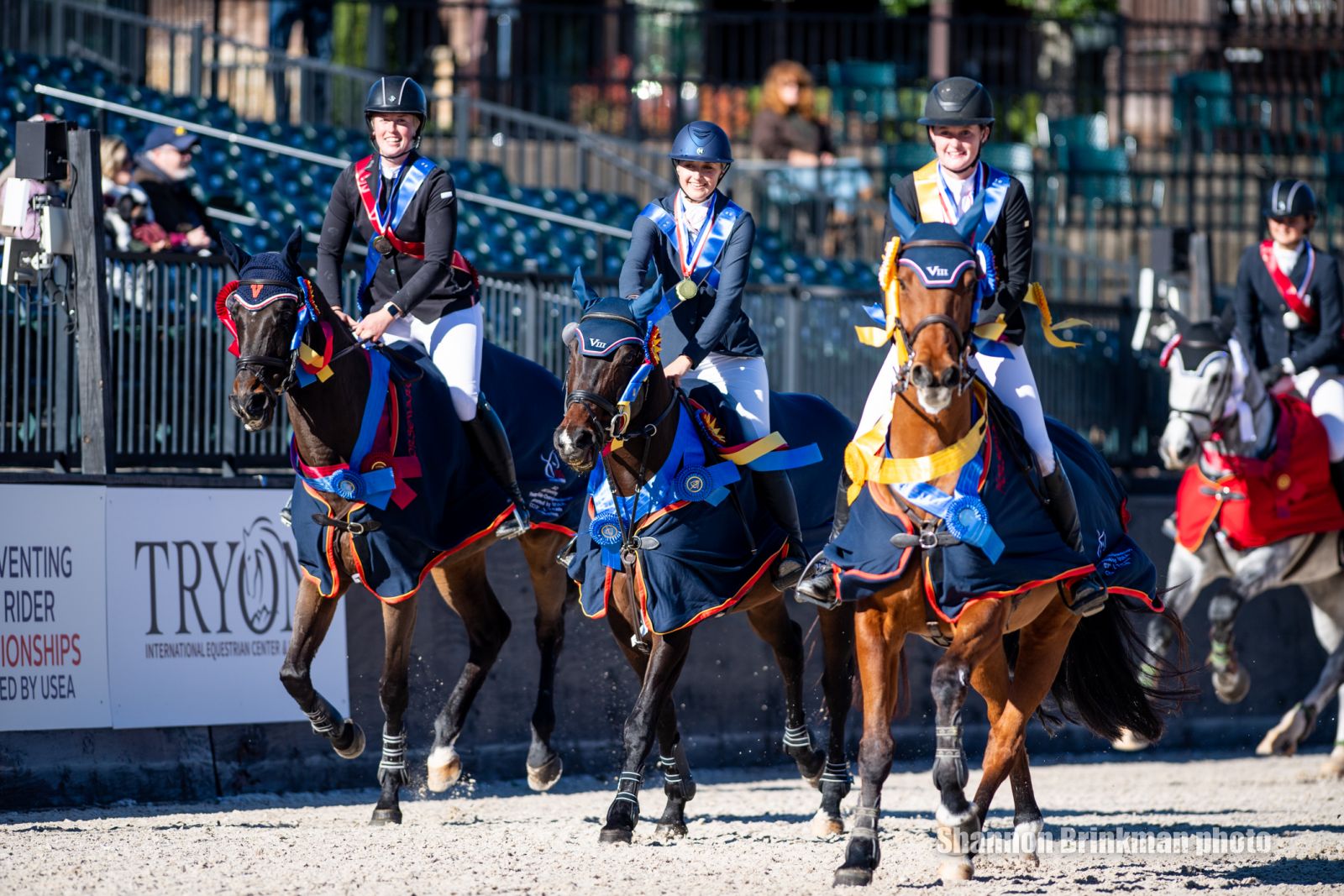 Here’s a look at the rest of the crowned winners from an exciting weekend in North Carolina:

CCI4*-S: Kansas-based Julie Wolfert claimed the top spot in the 4*-S aboard Team Pivot’s SSH Playboy, capping off a successful Advanced season for a pair who will be definitive ones to watch in 2023. It’s a fun story behind the Team Pivot ownership duo of Sheri Gurske and Renee Senter, both mothers of students in Julie’s program and riders themselves (in fact, Renee completed the 2022 Mongol Derby alongside Julie earlier this summer!) who decided to chip in to boost a determined and talented rider back to the upper levels.
CCI3*-L: Canada’s Karl Slezak finished what he started yesterday and clinched the win aboard the 9-year-old Hot Bobo, her second FEI win and first at this level.
CCI3*-L Team: The team representing Areas 5 and 8 took home the gold thanks to the efforts of team members Jordan Riske (Redemption Song), Janelle Fleming (Fly Me Courageous), Samantha Tinney (Cutty Sark), and Kit Ferguson (Cillbhrid Tom).
CCI2*-L: Full-time veterinarian Dr. Kevin Keane took home the win — beating out client and buddy Boyd Martin while he was at it — with his longtime partner, Sportsfield Candy. Also spotted on the podium: Olivia Dutton in third with former ride of her pop’s, Carlchen.
CCIY2*-L: Meg Pellegrini rose to the occasion on Sunday, jumping clear and moving from second to win the individual gold aboard Global Naxos. She’ll also add a team gold (and a 1* team gold…and a 1* individual silver…dang, girl!) to her loot, as the scramble team for Areas 2, 4, and 6 clinched the overall win. Team members were Meg and Global Naxos, Sissy Sugarman and Carmani, Audrey Ogan and RevitaVet Always Cooley, and Mya Poulos and Cornfire.
CCI1*-L: After a bruising fall in the 4* yesterday, Liz Halliday-Sharp regrouped to win the 1* aboard Debbie Palmer’s Maybach, a wire-to-wire win and a finish on dressage score.
CCIJ1*-L: Lizzie Hoff and HSH Limited Edition also completed a start-to-finish run to individual gold in the Junior 1* Championship. Lizzie and the scramble team representing Areas 2 and 7 (Meg Pellegrini and Cassilio G, Noah Stanlaske and Chesterland) also won team gold.

We’ll leave you with a few social snaps and some of our favorites from show photographer Shannon Brinkman to wrap up the last major weekend of eventing for the season. As always, Go Eventing! 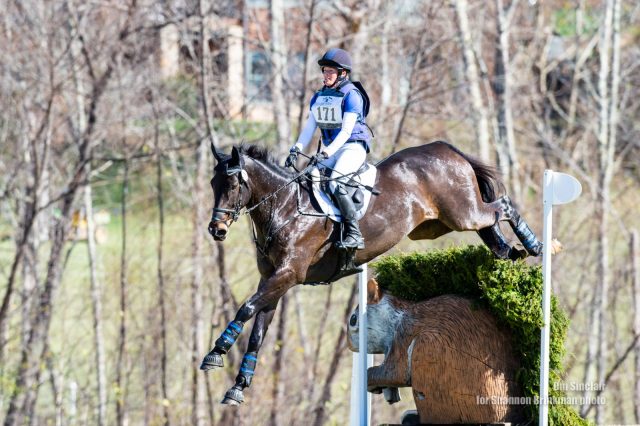 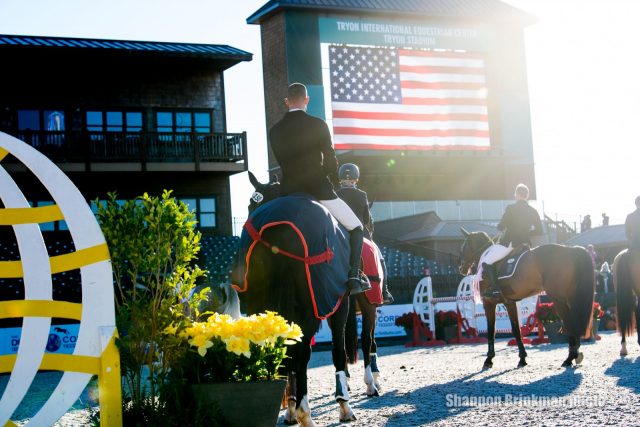 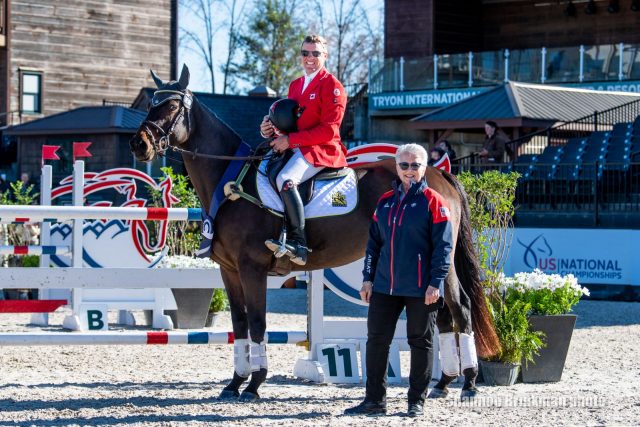 Karl Slezak collects his winnings in the 3*-L with Hot Bobo. Photo by Shannon Brinkman Photography. 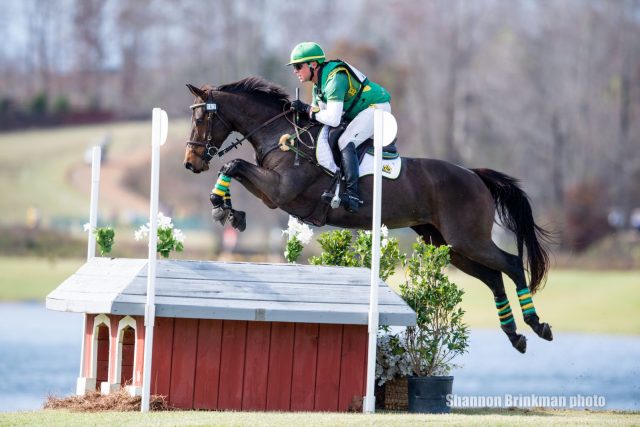 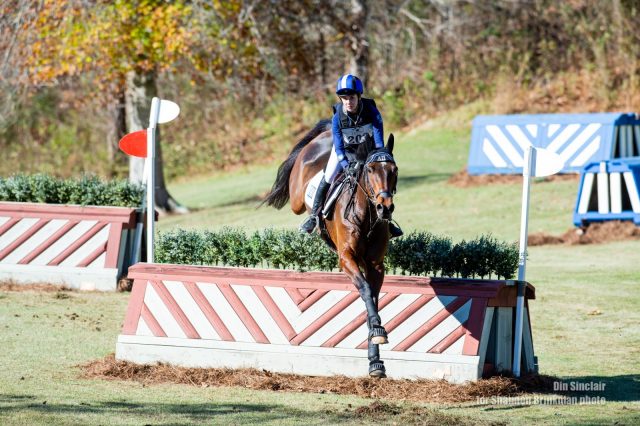 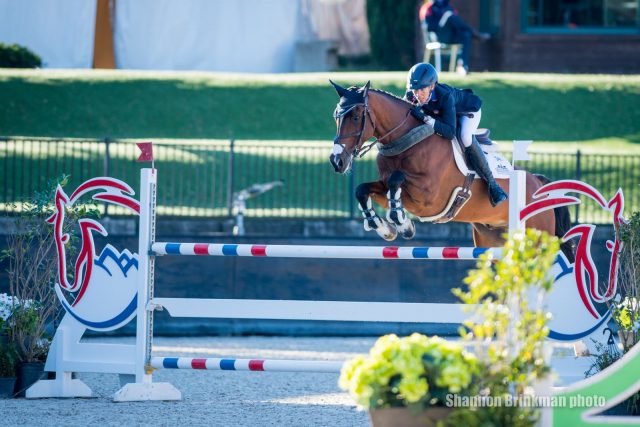 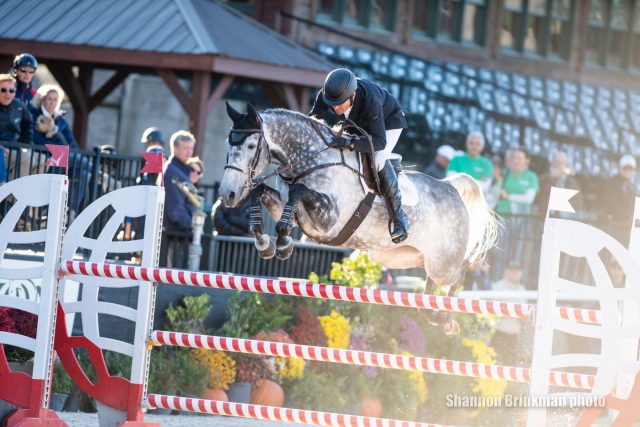 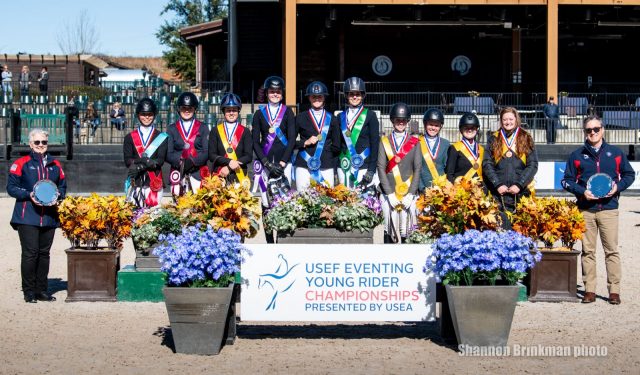 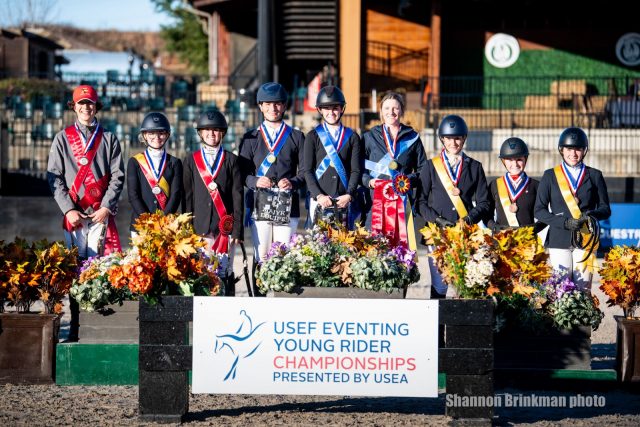