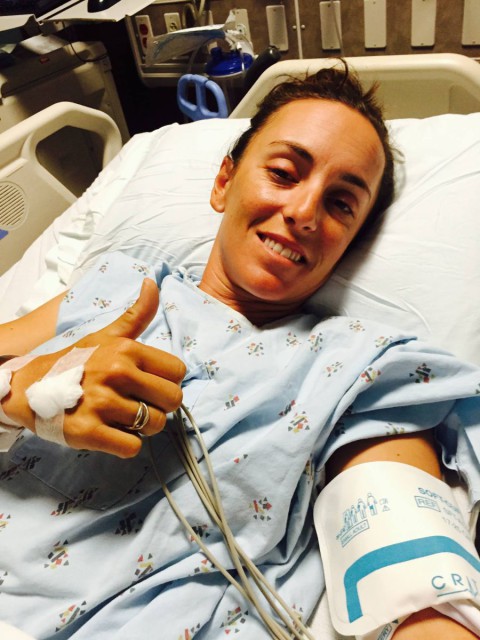 We reported yesterday that Will Faudree underwent surgery to stabilize a neck injury after falling from Hans Dampf while competing in the Advanced division at Five Points Horse Trials on Sunday. We’re also sending positive thoughts to Dana Cooke and Sara Siegel as they recover from injuries incurred in mandatory retirement falls on course at the same event.

Dana broke her pelvis in a fall at fence 17 on the Intermediate cross country course. Dana was riding FE Ophelia, an 8-year-old Zweibrucker mare owned by Kingfisher Park. Ophelia was uninjured in the fall.

“I missed to a large table going uphill into a combination,” Dana wrote on Facebook. “FE Ophelia was a rockstar and tried her little heart out and pretty sure she tried not to land on me. But unfortunately she did, breaking my pelvis in three places.”

Thankfully, Dana’s injury will not require surgery. FE Ophelia was previously campaigned by Clayton Fredericks and Elinor MacPhail. She and Dana completed their first horse trials together last weekend at Chattahoochee Hills, placing fifth in the Open Preliminary.

Sara Siegel broke her collarbone when she and Pure Possession fell at fence 18b, a skinny corner on the Intermediate course. Sara is an assistant to Boyd Martin, and he confirmed to EN that Sara is doing well after having surgery on Monday morning to insert a plate and repair the broken bone.

Pure Possession, a 10-year-old Thoroughbred gelding owned by Sara, Paula and Robert Siegel, was uninjured in the fall. Sara has produced this horse from the Beginner Novice level. They moved up to Intermediate this year and have successfully completed four Intermediate horse trials with no cross country penalties.