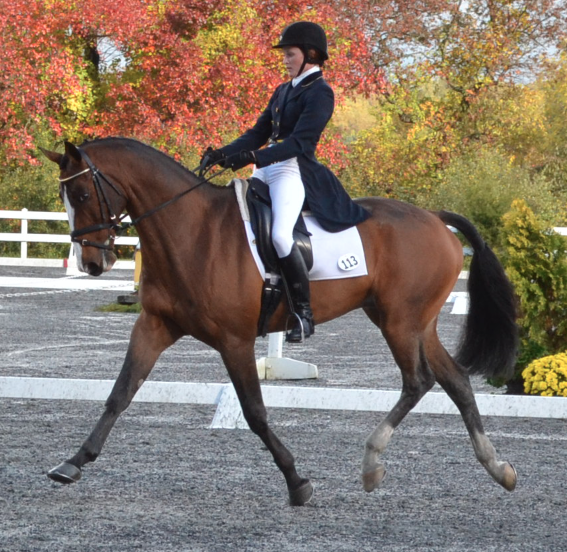 Danica and Utah B at Fair Hill in 2012. Photo by Jenni Autry.

Danica Meyerhoff is no stranger to the eventing scene. Competing with Utah B, Danica reached the three-star level while she and husband Bobby resided on the East coast. Although they had measured success at the level, something was still missing for Danica.

“I’m a pretty competitive person. We were doing well at the CIC level, finishing in the top five or top ten,” Danica said. “But I just couldn’t seem to duplicate it at the CCI level. It’s like I couldn’t quite get over that hump and finish super clean in the top ten or five in the CCIs.”

After picking up an elimination in the CCI3* at Fair Hill in 2012, Danica made the decision to step away from eventing for the time being. “I felt like there were some inconsistencies in my riding, particularly with the dressage and cross country,” she said. “I didn’t feel that I was in the right place, and it was really getting to the point where I wasn’t enjoying the sport anymore.

I kind of had the thought in the back of my mind that I wanted to do something else for the last year we were competing, but I just felt like I should keep pushing, and I felt like I was the only one who felt that way.”

Danica grew up in Canada and made frequent trips to Spruce Meadows to watch the jumpers compete. “I think I always knew that jumpers were really where my heart was, but I evented when I was a kid and it just seemed like a natural progression. But I knew I wanted to do more with the jumpers.”

Danica transitioned to the jumper ring, which was a difficult change. “I knew it was going to be hard, but not as hard as it was!” she recalled. “But I really wanted to improve my riding, and I was ready to take on something new.”

While competing as a jumper, Danica still kept an open mind when it came to eventing. Then came the cross country schooling fall that injured Bobby’s leg to the point where he would need several months out of the saddle to recover.

When we spoke with Bobby after his injury, he mentioned, halfway joking, that he was going to try to convince Danica to make a return to eventing in order to keep some of his horses in work. Sure enough, last weekend Danica dusted off her vest and took the young mare Celeste out at Twin Rivers in the Training division. The comeback was a success, as Danica piloted Celeste to a first place finish after finishing on her dressage score of 34.1.

Does this signal a return to the sport for Danica? “I think if the right horse came along, and I had the opportunity I would take it,” she said. “I would want to try to get back up to the upper levels, seeing how competitive I am.

That event was great because it really gave me confidence and I could feel that the holes in the my riding felt like they were filled in. I’ve always enjoyed all three phases, but after that event, I really enjoyed riding all three together.”

Taking a step back from the sport was instrumental for Danica. “Before, I would have feelings leaving the start box like ‘what if I screw up?’ or ‘what if I don’t get the perfect distance?’ I didn’t have the confidence, and I was afraid of not being perfect. (At Twin Rivers) I felt a difference in that I knew it was going to go well instead of wondering if it would, because I was much more confident in my riding.”

Danica still plans to continue her career in the jumper ring, but she’s happy to have made the return to eventing, even if it ends up being a temporary one. “I think it was really important for me to take a step back. I was feeling like I was giving up, and that I was the only eventer who felt that way, but when I made the decision I was shocked to find how many people could relate. For me, it was the right decision. Sometimes it’s good to step away and do something different for awhile, it really helps you improve and grow as a rider.”