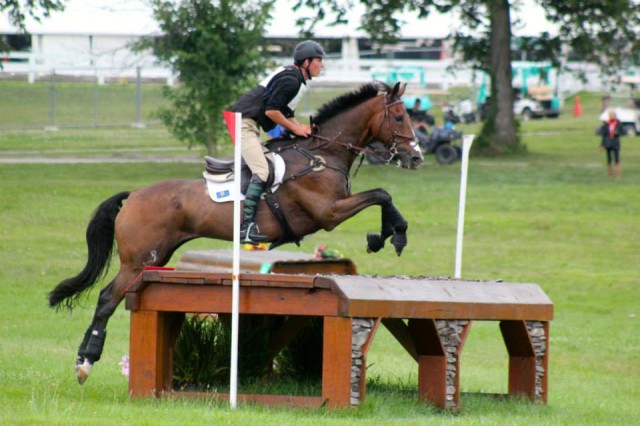 David Ziegler burst into the spotlight this past weekend at the North American Junior and Young Rider Championships when he medaled in not one but two sports — clinching individual CH-Y** gold in eventing as well as individual silver in dressage.

The individual gold in eventing marks the end of a long quest to get to Young Riders, a goal David set two years ago when he left his home in Alberta, Canada, to become a working student for Missy and Jessica Ransehousen at their Blue Hill Farm in Unionville, Pa.

“I’d had a couple lessons with Missy in Florida a few years ago on my dressage horse, who was eventing at the time,” David said. “It definitely seemed like the program I needed to be in if I wanted to keep eventing him.”

And he did keep eventing that horse, Peninsula Top Man, for about four more months after moving to Pennsylvania in 2012, but he and Missy ultimately decided that “Topper” wasn’t brave enough on cross country to go beyond the junior level.

Though it was a difficult decision to make — especially with David’s goal of Young Riders looming over him — the timing turned out to be ideal, as Missy’s four-star partner Critical Decision was just coming back into work after a hamstring injury at Poplar Place in March 2012 stymied his chances at qualifying for the London Olympics.

“He’d had a list of injuries before that at the higher level as well, so she made the decision at that point that he wasn’t suited for the four-star level,” David said. “He loved cross country so much, so she didn’t want to completely retire him right away. The Intermediate level seemed like a perfect challenge for him since it would keep him happy without causing any further injuries.”

So at 16 years old and after contesting Rolex three times in addition to Burghley and Pau, “BG” became David’s Young Rider mount. David started riding BG in August 2012 while Missy traveled to London to coach the U.S. Paralympic Dressage team, and they clicked right away. The next step became building a partnership. 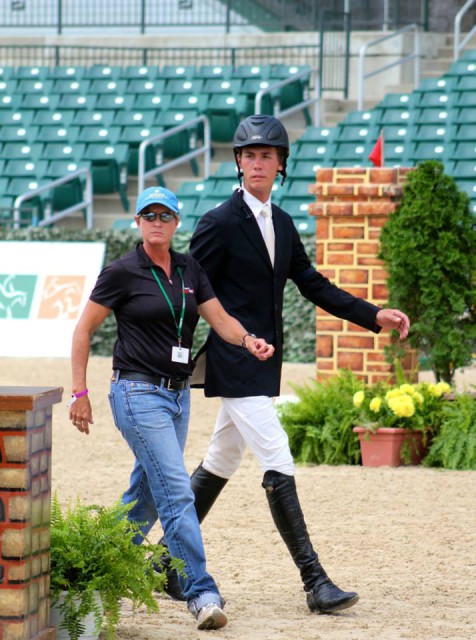 “The biggest challenge has been the dressage because he’s been ridden in a certain way for so long,” David said. “Missy is a lot smaller than I am, so it took a bit of getting used to how much aids to use and where and when to apply them.”

David competed BG for the first time in February at Ocala Horse Properties Winter II Horse Trials. From there, they placed 8th in the CIC2* at Carolina International, 5th in Open Intermediate at Fair Hill in April and 7th in the CIC2* at Jersey Fresh.

When BG, now 18, stepped off the trailer last week in Kentucky, he knew he’d returned to hallowed ground; his best result at Rolex was third in 2008, when BG and Missy jumped double clear on cross country and had one rail down the next day.

“In the dressage, I was really expecting him to go out and have a little more pep in his step,” David said. “He recognizes Kentucky; he lights up. And he rocked around cross country. I thought we might have time faults for going too slow, but he just opened up.”

David and BG led wire-to-wire in the CH-Y**, winning the dressage on a score of 46.3, jumping clear and inside the time on cross country, and knocking three rails in show jumping to still clinch individual gold by five penalty points.

“He’s definitely given me everything I could have asked for,” David said. “Having the ride on him has been a huge learning experience.” With the goal of Young Riders more than accomplished, BG will now officially retire from competing, though he’ll still be kept in a fitness program.

BG’s retirement means David is now focusing on taking Topper to Dressage at Devon this fall, where they’ll compete in Prix St. Georges. He’s also riding two young event prospects for clients at Blue Hill Farm, and his parents have a few young horses back home in Alberta he’s also hoping to bring to the States.

“It’s great having a goal to really strive toward,” David said. “Once you achieve it, you’re a little in limbo trying to see what the next thing is. I’m trying to figure out what I’d like to do next.” At the moment, he has his sights set on representing Canada at the 2020 Tokyo Olympics.

If that goal plays out anything like his last one, Canadian eventing has a bright future ahead indeed. Congrats to David and Missy on the big win at Young Riders. If you’d like to support the next phase of David’s riding career, he has an SCES account set up here. Go David, and Go Eventing.

PRO’s Samantha Clark spoke to David, Jessica and Missy after dressage in a great interview, which you can watch below. Click over to PRO’s Facebook page here for lots of great photos of David and BG at Young Riders.