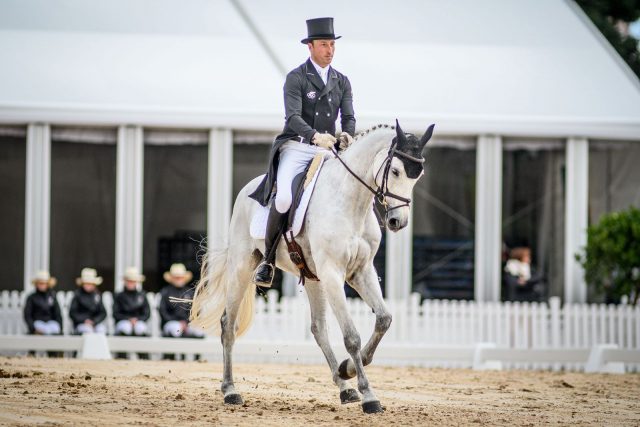 After this morning’s first horse inspection, we were treated to a teeny-weeny, dainty little dressage session in the drizzle this afternoon, which saw the first fourteen competitors deliver their dressage tests for judges Katrin Eichinger-Kniely (C), Tim Downes (B), and Nathalie Carriere (H).

Although top marks were few and far between, it was an obvious suspect who would top the ranks at the end of the day: Tim Price and Ascona M laid down a conservative and correct test, perhaps lacking in some of the mare’s usual sparkle, to earn a 28.1 and take an early lead in the competition.

But although we’ve come to expect brilliance from the exuberant mare, who won Luhmühlen 5* this summer, her jockey was happy enough to settle for obedient and attentive work, rather than demanding flamboyance in the ring.

“I’ve never had her so physically prepared – she’s coming of age at this level and it’s just been another reason for her to exuberant in all the wrong ways,” says Tim. “She’s certainly been a handful the last couple of days. She’s been crazy at times and then brilliant at other times, but that doesn’t get you through a test, so I’ve had to just try and think on my feet. I’m never the type of rider to try to wear them out, so I just keep coming a little bit more and trying something a little bit different – if I tried to wear her out, she’d just use it against me, so I had to persevere and try to get her into my way of thinking. But when we went in she was settled and with me, and looking like a normal horse in the ring was kind of enough. I didn’t want to ask too much and risk it – it’s all very well asking for more and getting some blips, and then you end up on the same mark or a little bit worse but they haven’t learnt as much.” 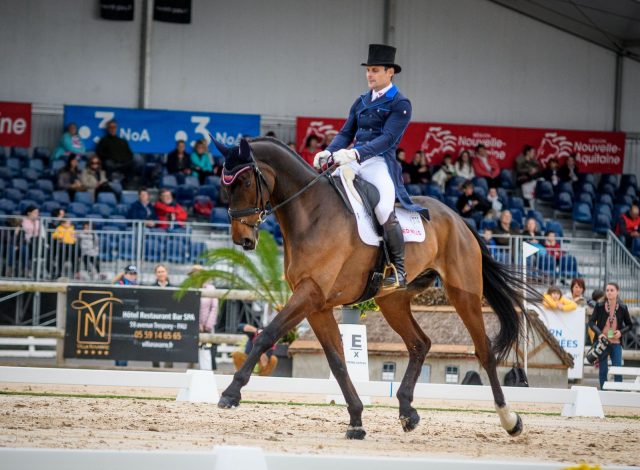 It was a little bit of deja-vu for Alex Bragg and Zagreb, who posted a 28.8 to hold a close second to Tim and Ava. For Alex, who has been achingly close to a top result at this level and finished third at Luhmühlen this year to the same pair, it was a matter of fine margins – as fine, even, as the margin that kept him from taking the top spot.

“I’m really pleased with him, but it’s tough going on a Thursday,” he laments. “They’re sharp, and it’s hard – if you do too little and they blow up, it’s a 30 test, but you don’t want to do too much with them, either.”

Still, on a day when good marks were hard to come by, their score isn’t too shabby a starting point – and would have been considerably lower were it not for a lack of cohesion in the first change, which saw them add a 4 to their score sheet and lost them the chance to finish in the 26 bracket. 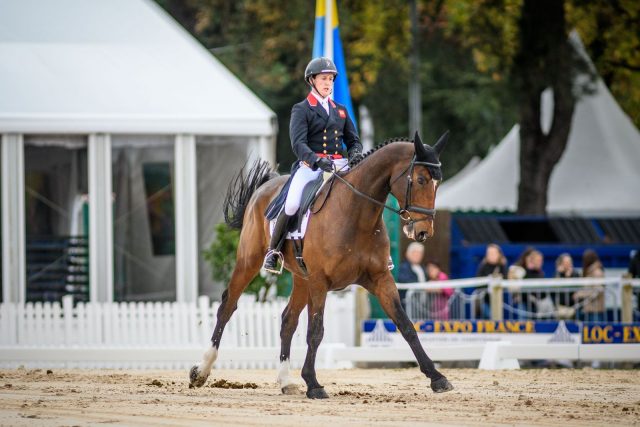 Tom McEwen didn’t fare quite so well under the judges’ watchful eyes, earning a 31.9 with his Luhmühlen runner-up Figaro van het Broekxhof after a momentary lack of connection in the medium canter earned him 4s, too. But this score was enough to earn him third overnight in this early stage of the competition, and it betters his Luhmühlen performance, too, which saw him earn a 32.2 with the oversized Belgian Warmblood. 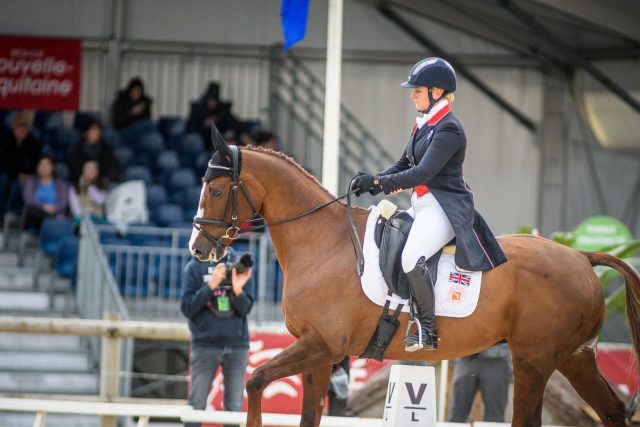 A debutante squeaked into the top five today, but it certainly wasn’t a first-time jockey: Gemma Tattersall brings nine-year-old Chilli Knight, the youngest horse in the field, forward for his first five-star this week. The son of Chilli Morning and Kings Gem has been described as a ‘yes man’, and he showed that generous nature in the ring today, remaining focused despite the myriad distractions around the arena. His efforts – and the careful piloting of Gemma atop him – earned him a 32.7 for fourth place overnight. 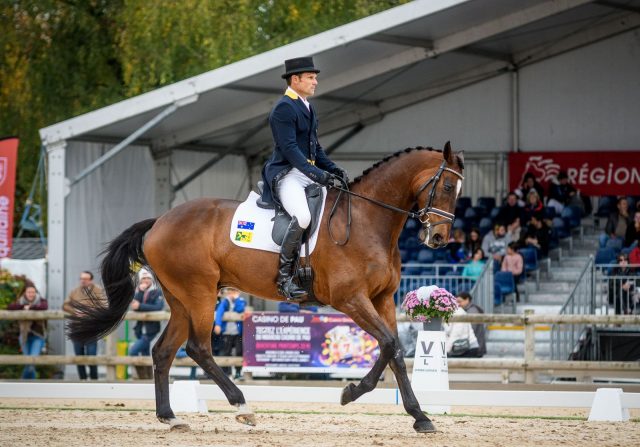 No one has had a longer journey to get here than Shane Rose: he and Virgil traveled for five days to make it to the south of France from their native Australia. But why a trip to Pau when Adelaide, at which the horse was second in 2015?

“I guess I just like spending money,” laughs Shane ruefully. “If I do Adelaide on him, he’s already done really well in the past there, so I felt that if I came over here and did a good job it would tick more boxes going forward towards Tokyo. If I can get all my work done here, then hopefully we can go home and prepare for if we’re selected.”

Although Shane based himself in the UK in 2017, he’s not planning a trip back to prepare for the Olympics.

“The trip to Tokyo’s a lot easier for us from home – it’s ten hours as opposed to twenty-two,” he explains. “It’s going to be a much easier prep for him.”

Wobbles in both right-hand changes precluded a higher placing, leaving Shane on 33 and overnight fifth.

“He’s been really good this year with them, but he hasn’t had the perfect prep in the last couple of weeks so I just didn’t give him enough time to work on those,” he says. “I’m disappointed with the score – I thought he did some really nice work.” 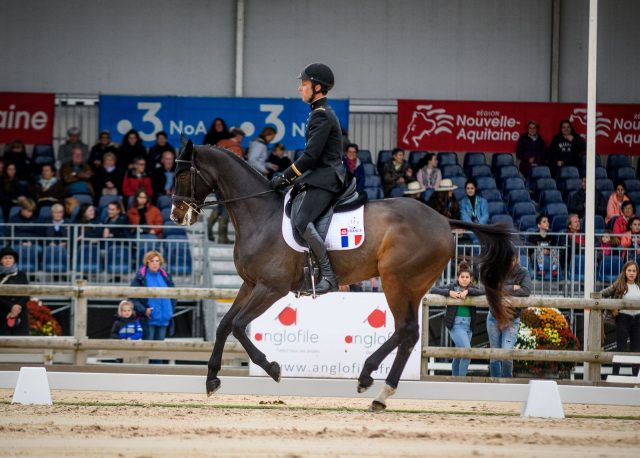 Experienced combination Arnaud Boiteau and Quoriano ENE HN lead the way for the home nation, sitting sixth at this early stage on a score of 33.2.

“I’m not as happy as possible, because I had a big mistake just after the start of the test,” says Arnaud, who lost marks for a break into canter in the medium trot. “It makes a bad start for the judges. But the horse was, as usual, nice and a good mover, though he’s not so easy to drive in the dressage arena. I was quite pleased, but the mistake cost me a lot, I think.” 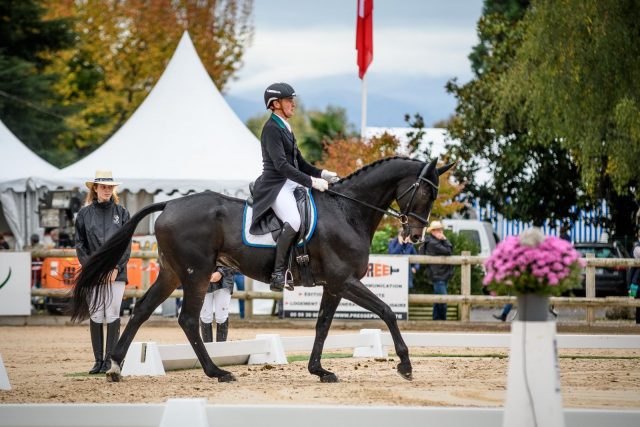 It’s a truly global top ten today, with six nations represented within this upper echelon of the leaderboard. One of those nations is Brazil, ably represented by Marcelo Tosi and the Thoroughbred gelding Glenfly, who was 25th at Kentucky this spring. Today, they scored a five-star personal best of 34.3 to hold seventh place overnight. 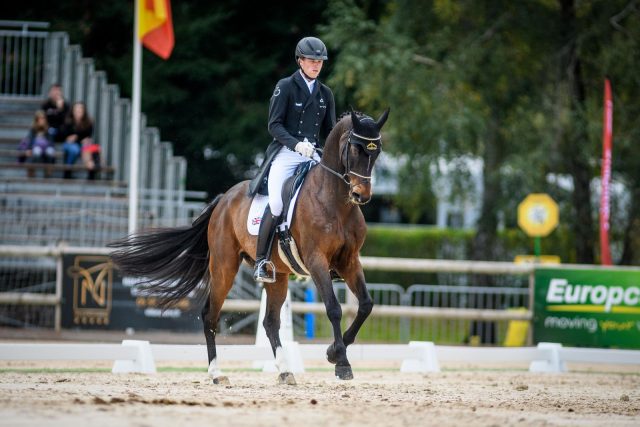 Eighth place is the domain of five-star sophomore Sam Ecroyd, who completed Luhmühlen this summer with his Pau partner Wodan III. Their test today didn’t quite hit the marks that their debut did, though their final score of 34.6 sees them well enough in the hunt after the first 14 combinations.

A tout a l’heure, mes amis!

The top ten after the first – shortened – day of dressage.