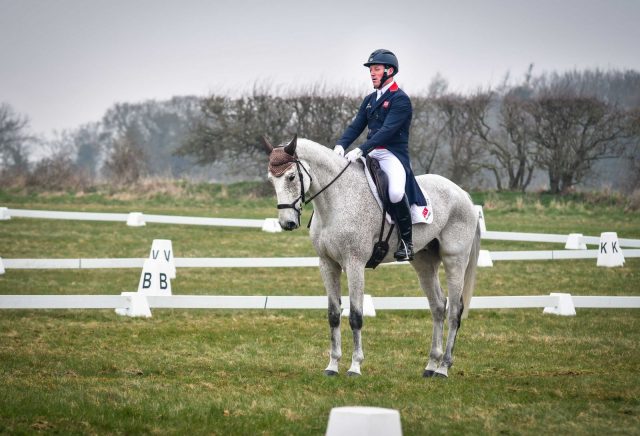 The second day of competition at the Barefoot Retreats Burnham Market International Horse Trials saw another high-profile group of horses and riders lay down their first-phase scores, but the murmurings from the assembled supporters were all about the final test of the day. 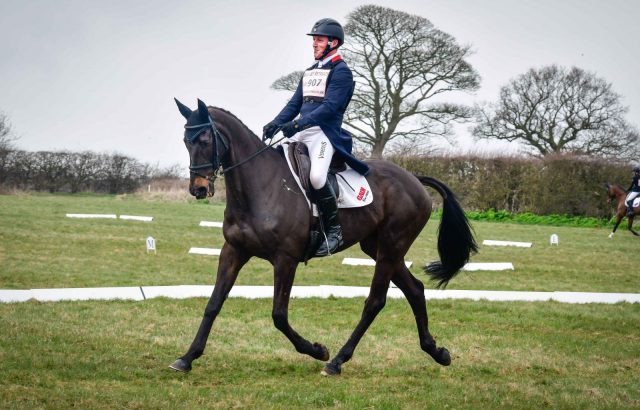 Oliver and MHS King Joules, 8th in the Advanced. Photo by Tilly Berendt.

Oliver Townend has dominated the north Norfolk fixture with remarkable consistency, winning the CIC3* here ten times since 2007. There are riders with whom certain events make easy association – Andrew Nicholson and Barbury, for example, or William Fox-Pitt and Gatcombe – but Oliver’s long-term relationship with his happiest hunting ground is the most successful of any rider with a particular venue. It’s not unusual for him to bring several of his top-level competitors here for their first competitive run of the season, but this year he entered just one in the main class: 2017 Burghley winner Ballaghmor Class. His remaining spring four-star entries – Cooley Master Class, Cooley SRS and MHS King Joules, all of whom are cross-entered at Badminton and Kentucky – contested national sections, with both Cooley horses entered in the OI and King Joules in the Advanced.

And so ticked along a day full of the great and good of eventing, creeping closer to that moment of reckoning at the end of the day, which would decide Oliver’s odds on an unusurped reign. Andrew Nicholson and Jet Set were the first in the ring, and they continued yesterday’s trend by setting a decisive personal best of 27.1 – 40.6 in old scoring, which bests their old-score international average of 47.3 by a considerable margin. We’ve seen Jet Set put up a first-phase score in this region just once before: at Bramham CCI3* in 2016 he scored a 41, and duly won the class. Today, the score was good enough for 11th place going into tomorrow’s final group of riders, but this horse is historically a climber: in thirteen of his fourteen international competitions he hasn’t faulted across the country. It was only at the end of 2017, in his four-star debut at Pau, that he incurred his first international non-completion when a late rider fall blotted his clean record. Jet Set will continue on to Badminton – but if he can maintain his previous form and add minimal time penalties tomorrow afternoon, he may well break the upper echelons of the leaderboard here, too. 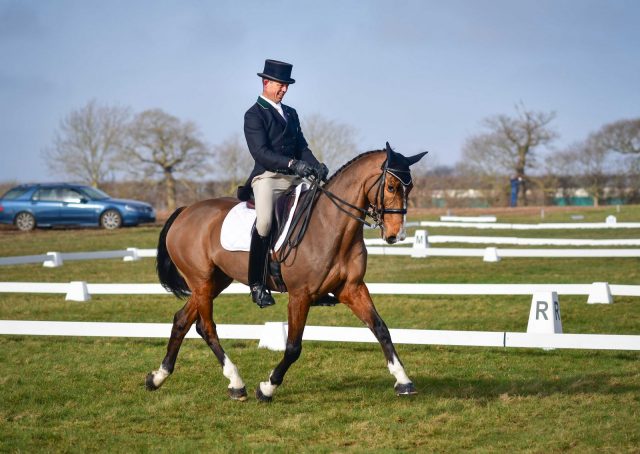 Jonty Evans and Cooley Rorkes Drift: back for 2018 with a score to settle. Photo by Tilly Berendt.

Firm fan favourites Jonty Evans and Cooley Rorkes Drift were another of the morning’s early contenders, posting a 26.8 for a test that was balanced and correct, if, perhaps, more conservative than previous efforts. Their score didn’t rival their career PB at Badminton last year, at which they scored 37.2 (24.8), but was good enough to secure them 9th place overnight. This is the 12-year-old’s first run of the season, after an early intended run at Aldon was lost to what has been an exceptionally wet March, and is the start of a campaign to settle the scores of 2017, which was marred by several uncharacteristic runouts across the country and fractured by the complicated sale of the horse. 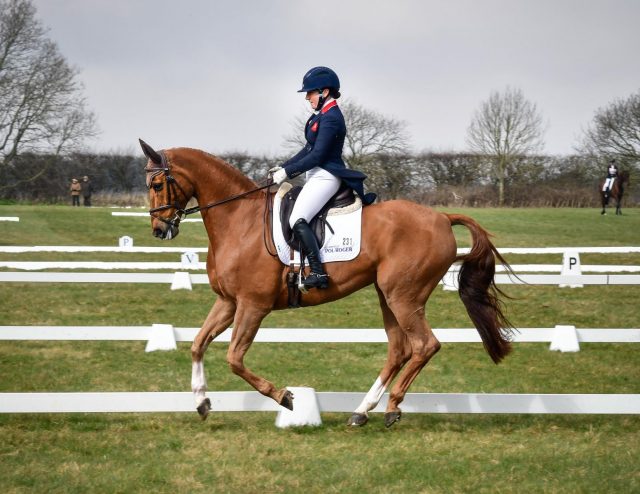 Laura Collett and Grand Manoeuvre, who will focus on CIC3*. Photo by Tilly Berendt.

Laura Collett‘s Grand Manoeuvre slotted in just behind Jonty on a score of 26.9. The 14-year-old Hanoverian has completed two four-stars before, once with Laura and once with former rider Nick Gauntlett, and it was widely thought that he would, perhaps, be entered again this year. But instead, Laura has decided to focus on the Event Rider Masters (ERM) CIC3* series with him instead after top-ten finishes in the Blenheim and Barbury legs last season.

Ireland’s Aoife Clark brought forth her Badminton entry Master Rory (31.3, 31st), but it was her Fernhill Adventure who gave the performance of the day, scoring a PB 24.1 to sit in third place. With only one clear international cross country run on his record since early 2016, the gelding isn’t the surest bet for a top placing tomorrow, but he goes into the jumping phases with the confidence of a good run in Barroca’s CIC2* behind him.

Fourth place was taken by Fernhill Pimms, who, with rider William Fox-Pitt, is cross-entered for Badminton and Kentucky, but currently waitlisted for the former. This is because he’s one of a small string of horses that have been lightly campaigned – if at all – since William’s accident in 2015. The fourteen-year-old’s 10th place finish at Burghley that year was his last international run, but he’s run well, if slowly, in two OIs and an ON since. Part-owned by Catherine Witt, who has been one of William’s top owners, he’s a reliable campaigner and, if he runs tomorrow afternoon, will likely post a steady, slow clear to regain his sea legs. 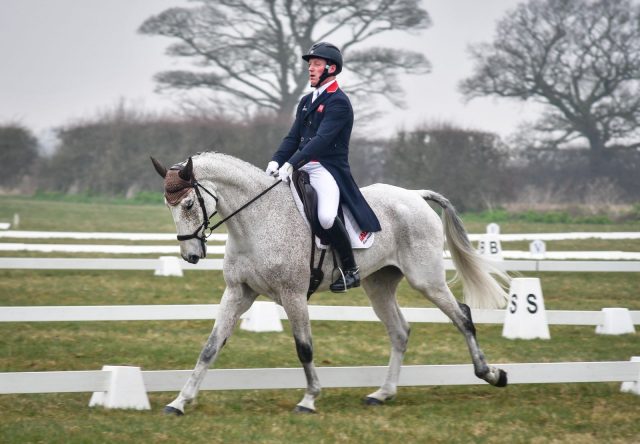 And as for Oliver and Ballaghmor Class? If those gathered were expecting them to swoop into the lead, they were to be disappointed, as the Yorkshireman and his Courage II gelding posted a 29.7 for 24th place overnight. But both horse and rider are fast and typically clean across the country and, on a course where the time is always tight, this could see them make huge strides up the leaderboard. Their occasional tendency to a pole, though, could equally cost them that climb – there’s eight penalties between them and the top, and those eight penalties can be made or dropped easily. 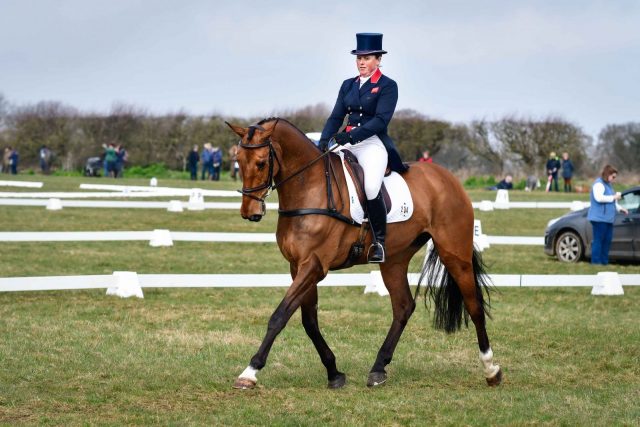 Pippa Funnell holds her lead with Billy Beware, and finishes the day with three horses comfortably within the top ten. Up-and-comer Billy Walk On earned a 26.5 to take 8th place at this stage. He was 20th in this class last year, but the remainder of his 2017 season was dogged by problems that belied an otherwise impressive record, with ten consecutive top-ten placings at international level preceding that season. If Pippa has cracked the issues of last season, then she’ll be sitting aboard a super-fast cross-country machine tomorrow. If she hasn’t, we may see an early withdrawal. 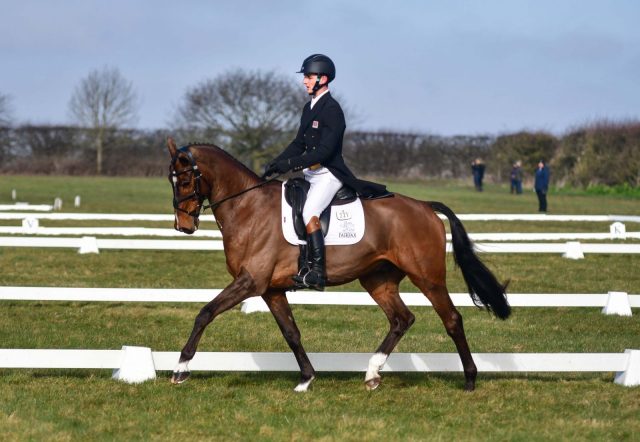 The CIC3* wraps up tomorrow with the end of the dressage in the morning, followed by showjumping and cross country. We’ll be bringing you all the day’s action, as well as a breakdown of what the results could mean for our Badminton and Kentucky-bound horses. To see what the competitors will be tackling on the hill tomorrow, click here, and, to follow along with the live scores, click here.

We’ve been keeping an eye on CCI4* entrants in the OI and Advanced sections, too, and we were heartbroken to report that British-based Canadian Kathryn Robinson‘s longtime partner Let It Bee died on course after collapsing between fences. The EN team sends its deepest condolences to Kathryn and the Cranford Stud team. 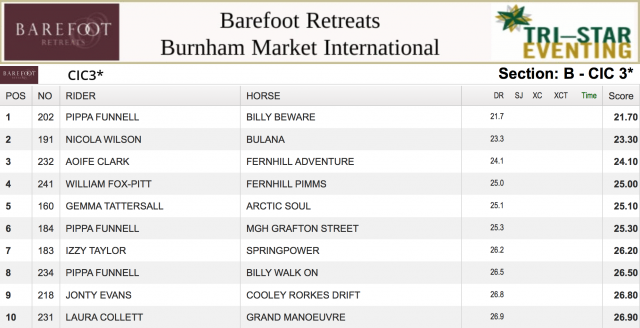