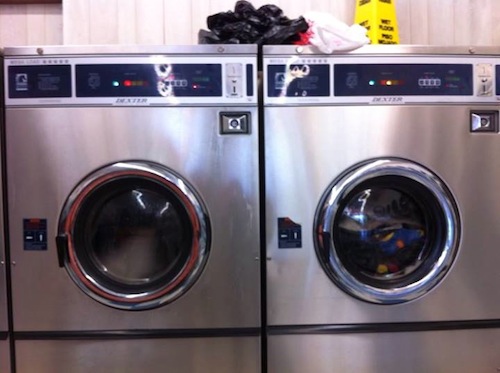 I should have taken a picture with the chocolate-milk colored suds.

Everyone loves the clean feeling of new socks. Thick and fluffy, straight out of the bag and on to your feet. Quite possibly the only thing more joyful than new socks is a brand new saddle pad. Or maybe new polo wraps. Or new coolers, new winter blankets, new quarter sheets… Whatever your equine-clothing vice is, you will eventually need to wash it. I struggle to stay on top of my own laundry, so admittedly my pony’s laundry doesn’t get done as frequently as I know it should. Ideally, we would all be able to wash horse-laundry everyday but there are some significant logistical concerns when it comes to laundry.

Access – Not every barn has a laundry room. If you are lucky enough to have one at your barn you may find yourself lulled in to the “I can do it later,” mind trap due to the theoretical ease of doing your pony laundry. Of course “later” either never comes or comes at the exact same time that it does for everyone at the barn.

Quantity – Horse laundry is often awkwardly shaped and a challenge to fit in to a the washer. Especially if you are a dedicated “single load” kind of person like I am. Anyone who has watched me cram five saddle pads, two 70″ stable sheets and a 3′ tall pile of polo wraps in to a front loading washer will tell you that determination and shoving can only go so far. Swearing helps, but even the use of the most potent and arcane magic words can’t reduce the size of a tangled polo wrap monster.

Detritus – horse laundry leaves behind its own strange bits of ephemera. Small wilted chunks of carrot, folded dressage tests, farrier receipts and horse hair are all things I have found in my washer or dryer after my barn clothes have been sent through. With pony laundry you’re going to end up with a LOT of horse hair in your washer and dryer. If you share your washing machine with other people, especially non-horsey people, this can become a prickly point very quickly.

There are no optimal solutions to the pony-laundry situation but there is an acceptable one, if you can pull it off: The Laundromat.  The Laundromat typically has multiple over-sized washers to handle the sizable loads I often bring from the barn.  Many are open 24 hours and can often provide some great people-watching entertainment.

The big catch when it comes to the laundromat is that it is incredibly easy to get yourself banned for life.  I have been banned from a few different laundromats and shown the door upon arrival at others.  Over the last few years I’ve fine tuned a system to prevent the embarrassment of being banned.  I’m not going to say it’s flawless, but it’s been working for me for a while.

First, stake out the proposed location.  See what times it tends to be busy, find out how many of the oversized washers they have and how many quarters they take.  Determine if the laundromat has someone on-site at all times to oversee the facility, or if it’s a more laissez-faire sort of place.  If you just show up with a big ol’ basket of stinky saddle pads you may run in to a stern-faced owner who casts you back out with the power of his dubious glare.  Staking it out ahead of time will reduce the likelihood of this sort of occurrence.

Second, don’t show up in your barn-clothes.  It may seem silly to stop at home to change between the barn and the laundromat, but in some areas your clothes can be a dead-give away as to what you’re about to wash.  If you’re covered in barn grime, it’s going to be really obvious that washer spinning the chocolate-milk colored suds belongs to you.  However, if you are dressed for the outside word it’s less likely that anyone will make a big deal out of it.

Third, go with friends.  Sometimes the people watching isn’t so good and the laundromat gets boring.  Meet some friends there who also need to do pony-laundry (power in numbers) and have a silly evening.  Have someone pick up burritos from Chipotle and spend some time gossiping or filling out entry forms for your next event.

Finally and most importantly, be a good laundromat-user. Don’t bring in mud- or poo-caked winter blankets.  Send winter blankets out to professional horse-laundry folks.  When you wash saddle pads and polo-wraps rake out as much hair as you can before putting them in the wash.  Even if you rake for hours know that you will leave behind horse hair and other bits of yuck in the washer and dryer.  While we may be cool with it, the general population is not.  Be sure to bring enough money to run an empty load in the washers you use and wipe out the dryers.  By taking the extra time to do these things, you’ll prevent the dreaded appearance of “NO HORSE LAUNDRY” signs.