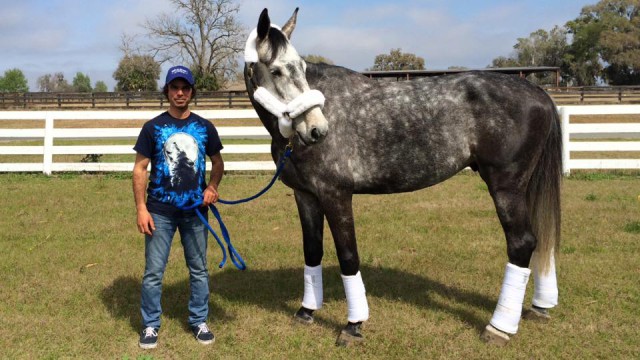 Dom Schramm and his newest mount, FE Flagstone. Photo via Dom on Facebook.

Dom Schramm posted a mysterious status on his Facebook page earlier this morning, letting his followers know that he and Jimmie were headed down to Florida for undisclosed reasons.

Guesses poured in for everything from a trip to Disney World to an earlier arrival at Red Hills, which is running this weekend. Later, he posted an article on keeping gray horses clean. This was followed up by the official announcement of a new partnership with Don and Anita Cook, which brought FE Flagstone, a 4-year-old German Sporthorse, to the Schramm barn.

Dom, who will be producing and competing the horse, is eternally grateful to Don and Anita Cook, who have been clients of his for about three years and have shown a passionate enthusiasm for the sport. “I’m so lucky to have Don and Anita, who are champions of the sport and want to see a positive change,” he said. “They approached us and said they wanted to get behind us and support us however they could.”

Dom contacted Clayton Fredericks when he and Jimmie were in Wellington in January for the Eventing Showcase, and “Owen” was a horse that Clayton recommended. “As soon as I got done riding him, I knew he was the right one for me,” Dom recalled. “So I set about making plans to bring him home.”

As it stands, Dom and Jimmie have entered a partnership with the Cooks instead of going down the syndicate path. “We wanted it to be a team effort rather than having a bunch of investors,” Dom said. “Don and Anita are all about the journey, and they loved Owen as much as we did. We, of course, would love this horse to be a superstar, but it’s all about the adventure of it.”

FE Flagstone (Cassini II – Just In Time, by Mytens) was brought to the U.S. by Clayton Fredericks and clocks in right around 62% Thoroughbred — a great sign for his makings as an event horse. Owen was imported in December of last year and picked up a third place finish at Novice at Rocking Horse in February.

As Owen is just four and still has some growing to do, Dom plans to take his time to ensure the gelding is happy and healthy. “I want to really make sure I produce this horse correctly,” he said. “There’s really no rush. The goal for this year is for him to be the five-year-old Young Event Horse champion, but I’m going to focus on getting him settled and not jump the guts out of him right away. There’s a lot of growing that’s still to come, and I need to make sure he’s happy with me in the irons as well.”

Dom and Jimmie would like to extend their sincere thanks to the Cook family as well as to Clayton Fredericks, who evidently has some top quality youngsters in his barn. Congratulations to the Schramms and to the Cook family for their new exciting addition! We can’t wait to see more — shall this youngster be the focal point of some new Evention episodes? We’ll have to wait and find out!