Doug Payne and Crown Talisman posted a great dressage score, turned in a wonderful clear cross country round, and finished off with just a rail in the final phase to place sixth in their first international competition together at Saumur. Check out Doug’s latest blog post, and it looks like he will have a helmet cam uploaded at some point as well. 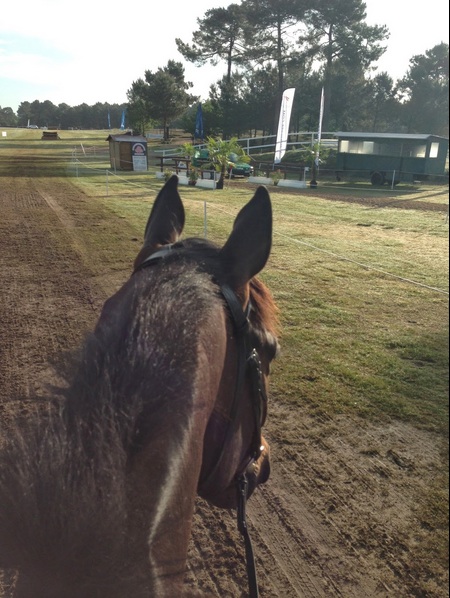 Tali on his early morning stretch before jogs at Saumur.

Tali started off the day in great shape, no worse for the wear. We headed out for a light hack and stretch in the morning before the latest jogs I have ever seen. They started up at 10 a.m., and being that just about half of the field remained, it was quite a bit quicker than Wednesday’s inspection. Tali trotted up great and went on to show jumping.

The course didn’t open for another hour, so Jess, my Mom, David and I headed out on to cross country to watch the CIC2*, which was running all morning. We returned to the main arena at 11:30 a.m. for the course inspection.

My first impression of the jumping course was that it would reward confident, forward riding with just a few options in regards to variations in the lines and striding. It may have been a little less technical than some of the courses we’ve seen this spring, but the jump placement and crowds made it a challenge to say the least! When it was all said and done, there were very few clear rounds.

As warm up can often be, it was chaotic, but this was a bit more than I’ve experienced — not only due to the area’s small size, the limited number of jumps, the pressure on the riders and crew, but also the language barrier. We all used one oxer to get prepared, so as you can imagine there are people yelling in Italian, French, English and Spanish … a proper cluster. Tali handled it all quite well; I’m very excited to see that when it comes down to working, he’s 100 percent in the game. Walking around warming up and hanging out is still another story, but when we’re going, he’s been great! 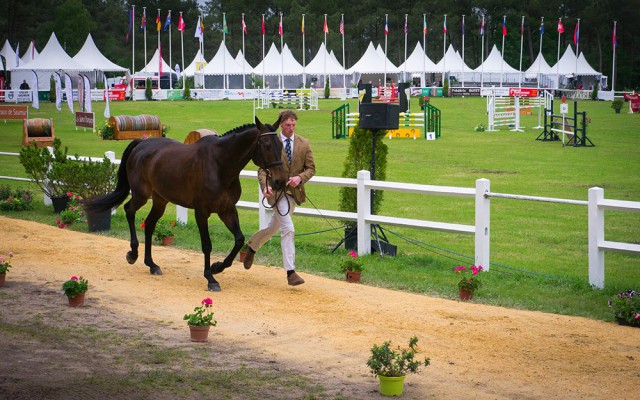 Second horse inspection in front of the main arena.

I tried to be mindful of his energy and kept the warm up on the shorter side of things. When called, we headed up to the arena for our round, entering with just one rail in hand to remain in sixth place. Oftentimes Tali is slow to start, but he was great this time from the very first jump. Unfortunately, there was a skinny jump at the far end of the arena that did fall. He twisted just a bit in the air; watching the video afterwards, I might have been able to get him square to it earlier for a better jump. He finished up very strong, clear the remainder of the course.

When all was over, we finished in sixth place. Always a good consolation, the rail wouldn’t have changed the standings. To be honest, I’m very happy and relieved to have the weekend wrapped up. It’s a funny thing; every day since the first of the year, I knew this very well may be the focus of the spring season. Once I was notified that I had received the Land Rover/USEF grant, the vague goal was solidified, and the pressure was on.

Every day since, every ride you are thinking of how to make the most of the time you have to prepare. Of course, anyone in my position wants to do well, but without a doubt you end up wanting to make the most of this rare opportunity and prove to those who have given you this chance that they were not wrong. At the same time, it’s absolutely still a learning experience for Tali and me. We will be better still next time from what was learned here.

There are countless people that I have to thank. First off, Larry and Amelia Ross, who have been partners of mine with Tali for years, I’d also like to thank Land Rover and the USEF for the grant opportunity and Joanie Morris for her incredible management. Of course, I have to thank David O’Connor for his massive help over the past year, as well as Silvio Mazzoni; both have made a tremendous difference in my riding. Last but not least, I have to thank my family, friends and Michelle Novak (Tali’s second mother), whose unending support can never be repaid.

Tali is on his way not to Amsterdam for his return flight home; he should be back in North Carolina by Friday. As soon as I get some reliable wifi, I’ll get both the show jumping and helmet cam videos of the weekend.

All the best,
D