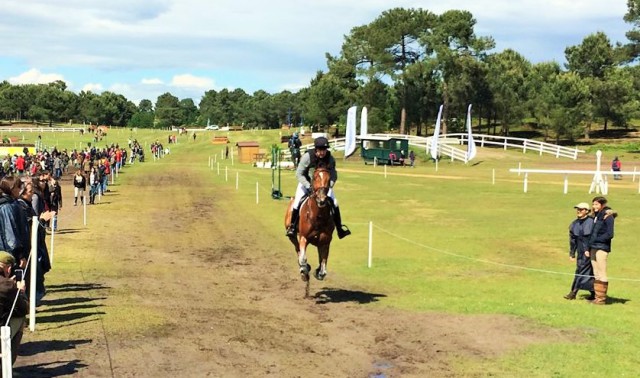 It’s been a rough day at Saumur, and there will be a distinct cloud hanging over the remainder of the event after the passing of Rodney Powell’s Happy Go Lucky today. We reported earlier that the horse appeared to have suffered a heart attack between fences, and we continue to extend our condolences to Rodney and all who were involved with Happy.

At the end of the day, we ended up with 24 pairs that did not complete cross country after either electing to retire or being eliminated. While problems came up steadily throughout the day, it is beneficial to look at the success rates, as many pairs had a wonderful day on Pierre Michelet’s testing course. Thirteen riders came home double clear, and 45 pairs will trot up tomorrow in the final horse inspection. This is certainly a solid example of a course that identifies the strongest competitors in the field.

One of the highlight of the day was a brilliant round laid down by Doug Payne and Crown Talisman. After Liz Halliday-Sharp retired Fernhill By Night early on course, Doug was the sole U.S. competitor left in the field, so there was plenty of pressure as he entered the start box as one of the last pairs on course. They rose to the occasion, coming home clear with just 6.8 time penalties to finish the day on a 50.2. This puts them into 7th place and well within striking distance to move up tomorrow in the show jumping.

This weekend is Crown Talisman’s first trip abroad, and today absolutely confirms that this horse is capable of competing on an international level. Of course, show jumping tomorrow will be anyone’s game, but today has been a great showing for this U.S. pair.

Overnight leaders Lue Chateau and Propriano de l’Ebat retained their lead after turning in a clear run with .4 time penalties and will go into show jumping with only two points separating them from second place Maxime Livio and Qalao des Mers. Christopher Burton and Graf Liberty, the early leaders today, will take third place into show jumping on a 46.0.

Show jumping day will kick off with the final horse inspection at 10 am followed by the show jumping at 4 pm local time, and it’s set to be an exciting finale in France as the CCI3* wraps up. We will have more from Saumur as it becomes available, including a blog update from Doug Payne. Go Saumur.