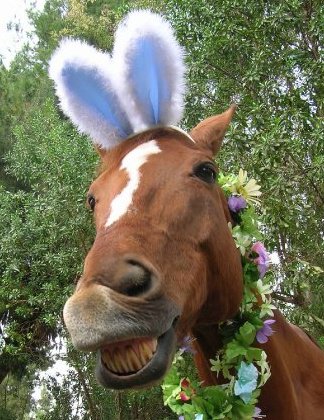 This Easter Bunny is in it for the Carrots!

Good Day EN Readers! And for those of you who celebrate Easter, Happy Good Friday!  This weekend is not just for Bunnies and Egg Hunts… It’s also time for Competition!

And in other competition news…

The Professional Riders Organization is reporting on The Fork CIC3* on their blog this week. Day One results were discussed on Thursday, wherein the blog states that “Today’s competition easily opens the door for Friday’s competitors to fight for the title of PRO Tour Series CIC3* champion and Advanced-A Division leader.”  Included in the commentary is a video interview with Day One leaders Michael Pollard, Karen O’Connor, and Marilyn Little-Meredith.  [Professional Riders Organization]

Eventing Nation mentioned Mary King’s decision to relinquish Chilli Morning after a difficult ride cross country at Belton Horse Trials in Lincolnshire. It’s now official that she will be passing the mount on to William Fox-Pitt. Chilli Morning is due to arrive at his Dorset stable in the next few days. Fox-Pitt is quoted saying he is “excited to see how [he] gets on with him.” [Metro.co.uk]

Paul Tapner and top ride Inonothing are celebrating a great week after placing second at the Belton Park three-star international horse trials in Lincolnshire. Inonothing is coming back from a 2010 injury that took him out of the sport for over a year. Now, Tapner intends to take Inonothing to Badminton in May, saying that he’s  “pretty keen to get back to Badminton.” Following that, he hopes to claim a place on the 2012 Olympic team.  [Wiltshire Times]

As has been reported earlier this week, Gaby Cooke’s top horse, Sir Roscoe, suffered a freak injury at Belton which led to him being humanely euthanized on April 1st. Gaby, who has been maintaining a blog through Horse & Hound about her build up to the Mitsubishi Motors Badminton Trials, has written an entry sharing Sir Roscoe’s final ride. She speaks of his special personality and how much she enjoyed riding him, and extends a thank you to all the people who have sent her uplifting messages and support. [Horse & Hound]

Dubarry of Ireland, creators of the ever popular and iconic waterproof Galway boot, is celebrating 75 years in business! The enduring legacy of quality and style that is apparent in every pair of Dubarry boots began back in 1937 at their factory in Ballinasloe, County Galway. Even then, the founders of the company wanted to stand apart from other Irish brands by choosing a distinctive name and providing uniquely fashionable and sturdy footwear.  Retired employees from the factory share their memories and their (still high quality) shoes, passing the legacy on to their children – who now also work for Dubarry! Eventing Nation would like to extend its congratulations for 75 great years! We look forward to many more celebrations honoring the Dubarry brand! [Dubarry]

The newest episode of The Eventing Radio Show is now available for download! In episode 188, Olympic champion Leslie Law recounts his memories of winning the 2004 Olympic Games in Athens aboard Shear L’Eau. New Zealand equestrian journalist Joan Gilchrist also weighs in, offering a journalist’s perspective on reporting from five separate Olympic games! Additionally, the winner of the Five Day Rolex Three-Day Event Stay has been announced! [The Eventing Radio Show]

My final bit of news is something that appeals to both my love of horses, and to my love of the Stage! It appears that, for the first time ever, the popular Anna Sewell novel Black Beauty has been adapted for the stage. An open-air theatrical production of the book will be touring Britain this summer, hosted by some of the most opulent and beautiful Heritage and country houses in the country. According to Horsetalk, the production utilizes a unique combination of modern theater technology and classic historical backdrops to present an engaging experience that does the original book justice. Actors portraying the horses have specifically designed costumes that feature transparent horse heads, allowing performers to both express emotion and embody the personality of the equine character they play.

Black Beauty is slated to run on a 27-date tour throughout Britain. And while there’s a good chance I’ll never make it across the pond to see this performance, at least I can enjoy the included video below. Go Eventing!