The 2022 EN Blogger Contest finalists were asked to write about their local event as one option for their Round 2 submissions. The following piece is published unedited. Your feedback will help us select our final winner! Use the rating poll below to give this post a thumbs up. Votes will be factored into our final decision.

My name is Allie Heninger, or the Autoimmune Equestrian on most social media platforms. I’m 25 and currently resting in Utah with my husband, my fiery little NightMare, my Curly heart-pony, and the four cats that adopted us. I’ve been riding since I was 6 years old, and was a hunter/jumper kid transplant into the amazing world of eventing. I’m a teeny bit of an adult re-rider, as I took about 5 years off from dedicated or consistent riding while attending the last few years of high school into college, but am now back at it, competing with my lovely little NightMare. I have an autoimmune disease that runs my life a bit, and have recently worked to fully embrace it as the disability that it is, rather than continuing to try to fight against my body. Managing a competitive equestrian amateur lifestyle with a malfunctioning immune system and full-time job can be pretty rough, but my mare and I are learning together as we continue to grow! 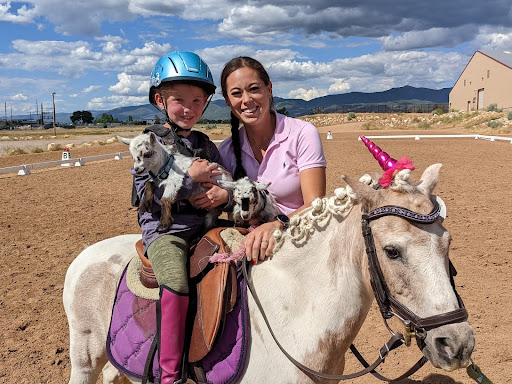 “We’re baaaaaaaaack!”, the Strider event page announces, excitement rippling through the Utah eventing community. Freedom Fest at the Skyline Eventing Park is one of the most-anticipated schooling events of our summer season. With both a Friday two-phase and a Saturday mini event, entries pour in from eventers young and old for this hot and windy weekend of fun. Prizes for the most patriotic outfit are a coveted affair, and with classes ranging from Grasshopper to Preliminary, everyone and their kids are taking part in the competition.

Amidst a sprinkling of two-phases, Utah only hosts three full recognized horse trials every year. Of the smaller schooling events, the June Skyline Freedom Fest is one of only three held at our two main competition venues, so here we see everything from leadline ponies to horses prepping for the American Eventing Championships. These two electric days are packed with amateurs testing out higher levels, crazy baby horses and ecstatic junior riders debuting at their first event, and bigger barn teams than many other shows see during the season. Most riders show during both days, with many experimenting in higher-level classes during the dressage and stadium jumping two-phase on Friday before taking on the professionally designed cross-country course in the Saturday mini event.

Being a relatively small community, Utah’s eventing riders are a fairly close-knit group. Our handful of trainers know each other well, and riders cheer each other on with enthusiasm, perhaps after seeing a fellow rider’s recent competitive struggles on our online Facebook group, hearing from a friend about a horse’s medical troubles, or simply knowing from previous event experiences that one rider’s mare has a particular habit of acting possessed (spoiler alert, this one is me). With this supportive encouragement pumping the air with adrenaline, competing alongside an adorable jumping mule and a miniature pony wearing a unicorn horn is enough to excite even the most nervous of young riders. Many trainers choose the Freedom Fest as a first event for many of their students or young horses, and for many others it serves as the perfect opportunity to move up to the next class level before continuing in the second half of our event season. This affordable, accessible, and fun midsummer event serves as a pillar in every conversation; anyone who’s anyone has at least one epic story that took place at Freedom Fest, and 2022 was no exception.

Utah County trainer Travis Atkinson will be competing at the Intermediate level in the American Eventing Championships in August, but at Freedom Fest, he donned an American-flag-bedazzled helmet and a t-shirt sporting a massive patriotic eagle as he trotted down centerline. Travis won the Friday two-phase with his Prelim-level mount Don Darco before coaching several of his riders to success the following day alongside his wife and training partner, Carly. Lani Homan-Taylor, with her caravan of no less than 16 competing horse and rider combinations, soared through the weekend like a supercoach with her GPH Equestrian students claiming victories across the scoreboard in every class level from Grasshopper to Novice. Trainer Sydni Peterson of Winter Farms traveled from the mountains of Park City to judge the dressage rounds, accompanied by her two tiny baby goats (appropriately named Piaffe and Passage) while sitting at C in her truck’s air conditioning during the blazing 95-degree heat. Sydni finished the long day of judging with an impromptu photo op that included both baby goats, Lani Homan-Taylor’s youngest daughter Holly, and tiny miniature pony Diamond, who sported a sparkly pink unicorn horn for their leadline test. Holly circled while friends took videos of Sydni holding up a baby goat on Diamond’s bedazzled rump, all while a chorus of teary laughter echoed across the arena declaring, “Only at Freedom Fest!”

As the crowds dispersed to their nearby accommodations Friday night in preparation for the following day of competition, a violent thunderstorm rolled into the open valley and scattered every stadium jump in the arena, breaking a dozen flags on the cross country course, battering the parked living-quarters trailers (and their soggy, sunburned occupants) with hail, and soaking half of the covered stalls in six inches of water. The venue is infamous for its relentless “Skyline Winds” as one can only expect living in a mountain desert, and this storm was no exception. After banding together a ragtag team of volunteers and staff, Lani Homan-Taylor and Carrie Matteson, owners and managers of the Skyline Eventing Park, were able to reset the venue to its previous state and run Saturday’s event without a delay. Both of these impressive businesswomen ride multiple horses in Skyline’s competitions and still manage to pull off their administrative event duties with flying colors.

Utah’s two recognized event venues, Skyline Eventing Park in Mount Pleasant and Golden Spike Event Center in Farr West, are the only venues in the state that host a full cross-country course, and have unfortunately held a precarious position for many years due to economic challenges and rapid residential growth. With this eventing community existing on a much smaller standard by comparison than those of states on the East and West Coasts, it has been a struggle driven by a labor of love and volunteer efforts to continue operating these full events on the western edge of USEA’s Area IX. Competitive riders must accept the necessity of driving a full day to the nearest recognized venues in Arizona, California, Colorado, or Washington. While the grassroot levels of competition will likely stay strong and succeed in holding their position with scattered two-phases and schooling shows, every full three-day event held in Utah is an oasis in our desert, a precious luxury that allows our few professional riders a chance to sustain their careers.

Freedom Fest’s post-storm Saturday event was truly a sight to behold. Between harrowing the small ponds out of the jumping arenas, replacing broken jump flags, and attempting to drain the now-flooded water complexes, a flurry of people and golf carts raced across the grounds as the competition began. Dodging excitable young horses fresh from the storm, anxious junior riders, and family members toting the most heavenly food truck corn dogs, riders trotted down centerline to the beat of “Drop It Like It’s Hot”, while grooms and students danced on the sidelines. Trainers sit on one of the many large boulders bordering the warmup ring, coaching multiple students at once while grazing the horses that they will soon be mounting for their own jumping phase. Riders tackle the cross-country course with a level of disregard for death usually reserved for those with much better life insurance policies, flying through the finish flags and joining their fellow cohorts to scattered applause and cheers. Superhero show moms offer water bottles and cold towels to anyone who rides by, taking pictures of teams sporting their ribbons and medals while dressed in their extravagant patriotic gear.

As the last pony clears the final jump of the day, everything from flatbeds pulling 8-horse trailers to two-door Fiats crammed with a single tack trunk drive around the grounds to load up and head home. ATVs and dirtbikes carry riders past the booth for the local tack retailer as its proprietors begin to pack away merchandise after a successful weekend of sales on matching sunshirts and saddle pads. Dressage test score sheets and large colorful ribbons cover tack trunks in the stabling aisles as students discuss their rounds over poultice and leg wraps, tossing tack into their trailer as they jog to the wash bay. It is loud, lively, and full of energy, and every single rider just can’t wait until they get to come back for the next event.