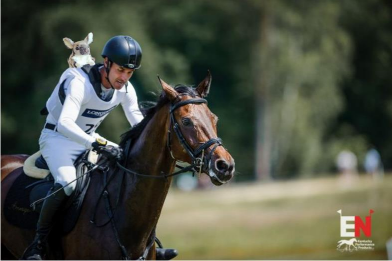 Can’t believe nobody else spotted this. Original photo by Tilly Berendt.

The 2022 EN Blogger Contest finalists were asked to write a piece telling the story of an epic Chinch adventure as one option for their Round 2 submissions. The following piece is published unedited. Your feedback will help us select our final winner! Use the rating poll below to give this post a thumbs up. Votes will be factored into our final decision.

Ruth Jacobs, 30 years old, has a PhD in experimental particle physics, but really, REALLY likes horses, actually. Born and raised in a small village in Germany, she caught the horse bug from her next-door neighbor who taught at the local riding school. Ruth works full-time as a postdoctoral researcher in Hamburg, Germany (an hour’s drive away from eventing hub Luhmühlen!) and owns 15-year-old Oldenburg gelding Soli, with whom she events up to German Novice level equivalent. Ruth’s most embarrassing eventing-related anecdote is accompanying a friend to a dinner with Piggy March, Ruth’s all-time heroine. Piggy and Tom March were lovely people, but probably too polite to ask who that star struck fan girl was, obviously too nervous to say anything sensible, let alone finish her baked potato. The pinnacle of awkwardness was reached by hugging Piggy for good-byes while mumbling something like “thank you for the privilege of meeting you”. Really sorry, Piggy, that was weird!

Can’t believe nobody else spotted this. Original photo by Tilly Berendt.

Naturally, I experienced some butterflies being sent to cover the Luhmühlen four- and five-star event as my first reporting assignment for EN, but luckily, I wasn’t going to be without help. “Just stick with Chinch.”, Sally had said at the briefing, “We’ve sent you our most experienced employee to show you the ropes. Don’t worry.”

When I picked Chinch up from the airport he was slightly surly and his salt-and-pepper grey fur was a bit disheveled. He didn’t say much in the car, obviously feeling the strain of a transatlantic flight and jet lag, but when we arrived at the venue he brightened up a little.

“Just remember”, he said, “as Henry Grunwald put it: ‘Journalism must speak, and speak immediately, while the echoes of wonder, the claims of triumph and the signs of horror are still in the air.’ Just be sure to capture those echoes of wonder and all the rest of it and you’ll be fine.”

“Erm ok, I’ll try”, I said shakily, feeling the pressure of my assignment starting to weigh heavier by the minute.

Watching Chinch at work was, to say the least, inspiring. Dressage day felt like a buzzing adventure with Chinch interviewing the riders as they came out of the arena. A spook at a flower pot near C, lost marks for a sticky rein-back, a flying change late behind – this guy knew how to tell the story of a dressage test such that even the most seasoned hunter got goosebumps. As the next pair, Felix Vogg and Colero from Switzerland, exited the arena, Chinch prodded me with his elbow. “Your turn!”, he hissed. I grabbed the recording device and stumbled forwards. “Uhh, hi”, I said to Felix, “I’m covering this event for EN. So,
erm, how’d it go in there, then?”

Afterwards, Chinch gave me a pitying look. “Seriously? ‘How’d it go’? You really have some work to do on your investigative skills, Newbie.”

In retrospect, the riders’ party on Friday night was all a bit of a blur. Chinch introduced me to all the eventing stars, clearly feeling at ease among them. He certainly was asked to dance a lot more often than I was, and eventually I lost sight of him in the crowd. When I turned in for the night, I wasn’t too worried. I had heard rumors that EN’s Chinch was one small rodent who liked to work as hard as he partied.

The worries started when Chinch didn’t show up at breakfast on Saturday morning. I asked around in the lorry park, the stables and the warmup, but none of the riders and officials knew anything about Chinch’s whereabouts. Even an announcement from the commentator yielded no further clues. Someone claimed to have seen something small, grey and furry, but it only turned out to be the ground jury president’s ill-humored poodle. I really hoped that Chinch was ok. How on earth was I supposed to cover an entire cross-country day by myself?

To my surprise, it didn’t go all that terribly, despite my missing mentor. Cross-country day has its own way of showering you with bucketloads of wonder, triumph and signs of horror, such that even the most inexperienced journalist must capture at least some of it. As the last few riders went out of the start box I got a slight sense of actually grasping this reporting business.

Finally, Felix Vogg and Colero went out onto the cross-country course. As they tackled the first water, suddenly I thought I saw something familiarly grey flashing on Felix’ shoulder. I rubbed my eyes. It couldn’t be, could it? The coffin complex brought certainty – Chinch was on board with Felix across the five-star course. Of course, Chinch being Chinch, he was wearing neither his three-point helmet nor his air jacket. When they encountered the huge drop fence followed by an open corner about half-way through the course, I held my breath. There had been quite a few problems, even falls, at this complex during the day. But Chinch sat tight, looking absolutely effortless going through there. Felix crossed the finish line clear and inside the time, completely unaware of his stowaway, taking the five-star lead.

After interviewing Felix in the cool-down area, there was a tap on my shoulder. “Not badly done, Newbie.” There Chinch was, slightly out of breath, but looking very pleased with himself. “What were you thinking”, I cried,” leaving me to fend for myself and hurling yourself around that cross country track like a lunatic?”
“Oh, come on, Newbie! I’ve had Willberry Wonder Pony going on at me all season, on how he has completed this many four-stars and that many five-stars and how he is the FEI’s top-ranked stuffed eventer. I just thought it was time to give him some healthy competition up there.”