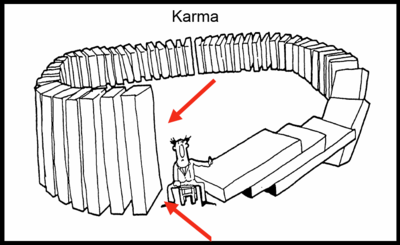 Over the past few months, I have received emails from several people who reported that they felt that their riding had improved just from visiting Eventing Nation each day, and that their horses tended to abscess less.  Most significantly, one of the FHI 2009 winners attributed their victory to hard work, dedication, Jesus Christ, and the fact the Eventing Nation was covering the event.  I asked several vets (the closest thing I could find to scientists) about the issue, and their consensus was that a supernatural phenomenon known as Eventing Nation Karma improves the riding, luck, and mood of all members of Eventing Nation.  Gauging from my first few rides here in FL, I’m not sure that I believe in EN Karma, but the experts have spoken.  Do you have any experiences that might confirm or refute the existence of ENK?

A few other notes:
Thank you very much to everyone who has commented on EN over the past few days.  This may be because people think commenting leads to extra EN Karma, but I prefer to believe in altruistic motives, such as ‘making John stop begging for comments,’ or perhaps that we have had more comment-worthy posts recently.
A special thanks to Rebecca Polan, our 200th Facebook friend and, coincidentally, a friend of mine.  Rebecca has produced several really quality upper level horses and also does some eventing PR work, among other things.  Click here to join EN.
Thank, as always to our friends at the USEA.  They have left a link to Leslie’s article up for several days and we really appreciate the support.  They definitely have some major Eventing Nation Karma working for them.
Finally, Happy Birthday to Leslie Threlkeld!!!  Leslie has been a great addition to Eventing Nation, and we are really privileged to have her as part of the team.