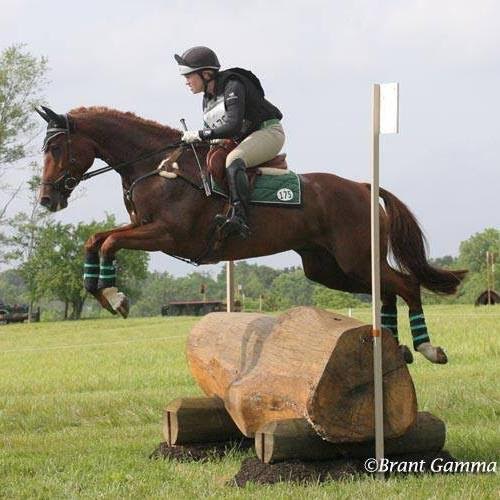 Maintaining several jobs, a family, a farm of your own, and an eventing career is not a task for the faint of heart. When Colleen Orta made the decision to move from the Midwest to the East coast to pursue her ambitions of competing at the upper levels, she knew the full plate she would be taking on. Now that she has a horse on which she’s pinned her dreams of someday reaching that top level, all of her hard work is paying off as she works toward a true amateur’s dream.

Colleen first began horse shopping when she realized her former Preliminary mare, Aleta NSF, didn’t want to continue to move up the levels. Luckily, Colleen was able to find a perfect home with a young rider for Aleta and began shopping in earnest for a horse that checked all the boxes.

“I knew I wouldn’t be able to buy something already made, so I had to start from scratch,” Colleen said. She works with Kelli Temple in Virginia, and Colleen was fortunate enough to benefit from a professional relationship between Kelli and Philipp Kolossa. Philipp is well known for selecting talented young horses and has been the source of many top horses competing both here in the U.S. as well as in Europe.

Philipp sent Kelli and Colleen a video of a striking chestnut mare, and for Colleen it was love at first sight. “I had looked at flying over to try horses, but there is a financial factor with that as well,” she said. “I trust Kelli and Phillip immensely, so when we saw the video we went ahead with the process of vetting and importing. She had a really awesome vetting and arrived in the U.S. just after Christmas three years ago.”

A Holsteiner mare by Casall out of Her Highness, Queen Bee was four when she arrived in the States, and Colleen set to work forming a relationship with her new ride. “She’d done a bit of show jumping, but no eventing except for some schooling,” she said. “When I saw the video, she had this trot that I’ve never seen before, and her jump was equally impressive. I felt comfortable buying her sight unseen knowing that she would make a solid resale project, worst case.”

She needn’t have worried about forming a bond, though, as Colleen and Queen Bee clicked right away. “She’s an extremely nice mare,” she explained. “She is not ‘mareish’ at all and she’s pretty much the same every day. She’s definitely what Kelli would call a ‘blood horse’ — she has a lot of power and is very scopey. So it’s been a bit of an adjustment to have so much horse, but the biggest thing we’ve dealt with is a silly spook here and there.”

The flatwork has been a pleasure for Colleen to hone, as Queen Bee exudes winning talent, rarely scoring out of the 20s at horse trials. Colleen and Queen Bee began their competition career in 2014 at Beginner Novice and have edged their way up to Training level. Kelli Temple has also taken the reins on the mare, working together with Colleen to produce a quality horse.

“Kelli was a big reason why I moved East,” Colleen said. “I’d never met her, but I’d watched her and observed and really liked her style. I’m lucky to work with one of the best people in the industry when it comes to producing horses. My goal is to emulate her; I want to be able to produce the same results she does.”

Colleen is eyeing a Prelim move up for Queen Bee this year and firmly believes that she has a talented horse to go even further. “I think she’s more naturally gifted than the other horses I’ve had,” she said. “(Eventing) is what she was bred for. When you’re on her, you have no question that she’s a powerhouse. She’s got the right movement and bravery — ingredients to be an upper level horse.”

Colleen is taking her time with the mare, who turns seven this year, knowing that she has a big goal in mind. It’s always difficult with the talented ones to want to proceed up the levels quickly, but she wants to ensure she is properly producing her mare. At the same time, Colleen works three jobs as a veterinarian and independent sales consultant to support her riding dreams.

“I think I’m what a lot of amateurs are,” she said. “An event rider who fits riding in around the rest of their life. It definitely makes you appreciate what you have when you’re working hard to support it. I work overnights at the clinic so that I can have the days to ride, and some days I definitely don’t feel like dragging my butt out to the barn.”

“I also have one of the best horse husbands out there,” she continued. “As horse husbands go, I definitely got lucky to have a supportive one. I’ve only had one horse at a time and have had to sell previous horses to move on, but it’s so rewarding to be putting the work into this horse and seeing the results.”