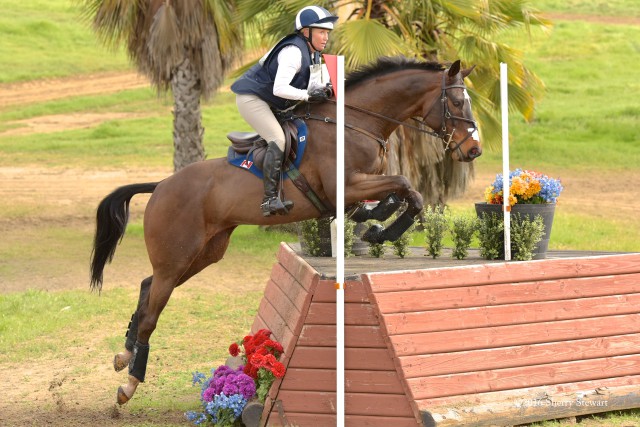 Hawley Bennett-Awad has been busy quietly producing a talented horse that she has tagged as her next upper-level star. High Duty, a 7-year-old off-track Thoroughbred gelding, has been climbing his way through the levels, showing a lot of promise along the way as Hawley aims to once again represent Canada on the world stage.

Hawley and High Duty’s partnership began when she met Jan and Jerry Hawthorne, who train and breed Thoroughbreds out of Double J H Ranch in La Cresta, California. The Hawthornes sent three Thoroughbreds that were ending their racing careers to Hawley, one of which was coming 5-year-old High Duty (Bertrando – Demo Memo, by Memo (CHI)).

“It’s been a cool process,” Hawley said. “When I first got him, I had just broken my back so I wasn’t able to get on him. I had one of my working students — we call her ‘little Hawley’ — ride him for me, and Katy Groesbeck took him cross country schooling for the first time. He’s a quirky horse with a lot of personality, so the poor girl got bucked off once or twice a week. He’s just so athletic and cheeky, but she did a great job with him.”

Personality is not something High Duty is lacking, but those quirks are a part of the package Hawley believes will make this horse the real deal. “He has the best personality to make a good horse,” she explained. “He can be naughty, but when you put him to work he goes to work.”

Hawley has brought High Duty through the levels, beginning with Novice and most recently picking up a win in the CIC* at Fresno County Horse Park last weekend. It hasn’t always been easy, as Hawley had to re-evaluate his training program after running into trouble on cross country at the Rebecca Farm CCI* last July.

“He can still be spooky at jump judges and people. Last year he was good and consistent, but I feel he was a bit behind where other horses his age are. He missed maybe three or four events for small reasons like an abscess, and it put him a little behind. (Rebecca Farm) was a bit of a wake-up call for me,” Hawley said.

“I stepped back and looked at the big picture and what my goals were and worked backward from there. We’re lucky enough to have Galway Downs across the street, and Robert (Kellerhouse) is great and allows us to come and school whenever we need to. So I would take him over there and just jump small things two or three times a week until it was no big deal.”

Taking a step back worked wonders for High Duty, who finished his 2015 season with a top-10 finish in a large CCI* division at Galway Downs in the fall. “Now he comes out of the box and knows what to do,” she said. “He just needed that few more months. I stopped putting pressure on myself and went back to the drawing board.”

Hawley drew on her previous experiences with her former Olympic horse, Livingstone. “I asked myself, ‘Why was (Livingstone) so good?’ I remember my coach, Pam Arthur, telling me that I wasn’t allowed to move up until I could ensure I hadn’t missed any steps and could go through what she called her ‘wheel of knowledge.’ I kept that in mind and made sure I wasn’t skipping steps because I want him to be solid and consistent.” 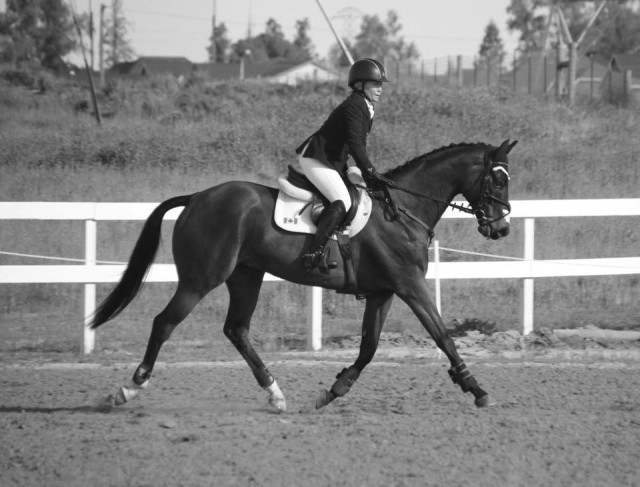 As for her plans for the future, Hawley has her eyes set on representing Canada at the 2018 World Equestrian Games in Bromont with the talented Thoroughbred, who she owns with her husband, Gamal.

“I had a good chat with (my coach Buck Davidson) about it,” Hawley said. “He agrees that the horse has a ton of talent. But I’m still wanting to make sure he is confident, so while I could have taken him Intermediate this spring, I decided to take him Prelim more and try to be really competitive. We’ll look at moving him to Intermediate in the summer and aiming for the CCI2* at Galway in the fall.”

Hawley works with Nicki Clarke as well as Robyn Fisher to hone her dressage, which she feels is close to breaking into the 30s at the FEI levels. “He’s a good enough mover that before he would score well even though he wasn’t completely pushing and through,” Hawley said. “Now he’s getting stronger and starting to carry himself more. It’s kind of cool to have a Thoroughbred that can move as well as run and jump!”

Even with those big plans in mind, though, Hawley knows that the road to the big time is a slow and arduous one, having been down it several times before. “He goes in all three phases in a snaffle; he’s just a good horse to ride,” she said. “But I don’t want to move him up too soon. When I move him up, I want it to be competitive.”

For Hawley, the process of producing a horse is among the most rewarding experiences she has had. “I’ve never had the money to go out and buy a going horse,” she said. “I’ve made every three- and four-star horse I’ve had, and it makes me really proud to be creating another one. It’s been awhile and I feel that this one is going to be competitive in all three phases. If I do my homework, there’s no reason he can’t finish on his dressage score every time out.”