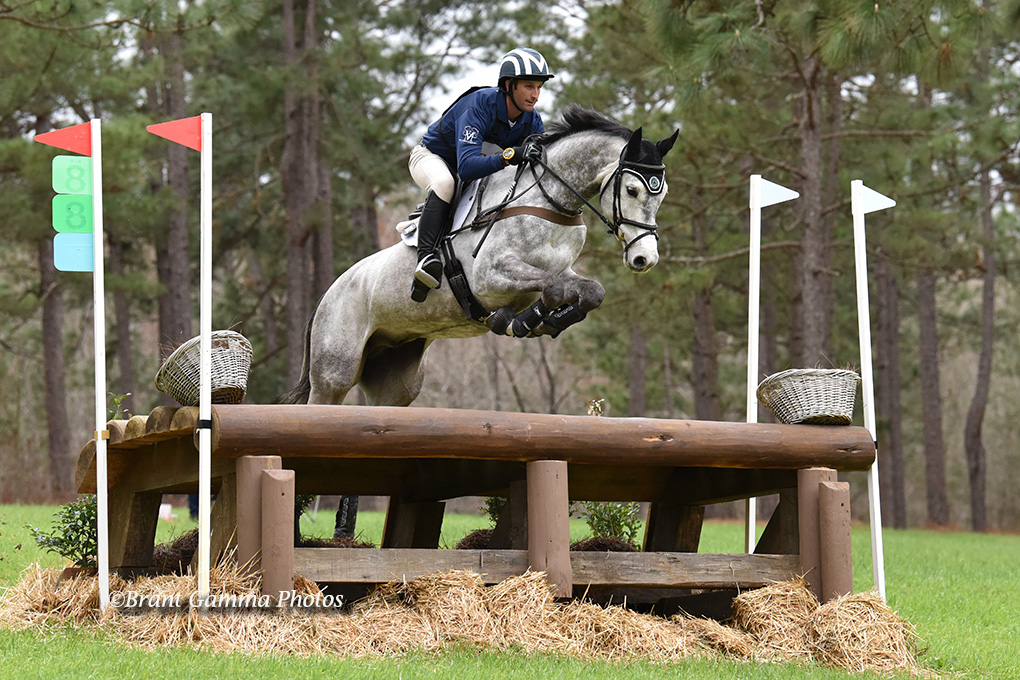 Sometimes setbacks are opportunities disguised in ugly wrapping — at least, that’s what Andrew McConnon told himself last summer as he heard and felt an uncharacteristic and ominous pop in his leg. He’d hit his leg on a jump while competing and knew it wasn’t good news right away.

The resulting injury — a spiral fracture to the tibia and fibula — would require surgery, rod placement, and the rest of the year spent out of the saddle.

The thing about riding injuries is that they always seem to occur when you’ve decided to put your big boy/girl britches on and tick off one of those pesky big goals on your bucket list. For Andrew, it was a rare opportunity to compete in the prestigious FEI World Young Horse Breeding Championships in Mondial du Lion, France.

He had just the right horse for it in Jeanne Shibo’s D’Luxe Steel (Up to Date – Nicola D, by Iroko), in his final year of eligibility for the competition at seven years old in 2021.

“No exaggeration, the first thought I had when I got off that day was, ‘oh no, we’re not going to France’,” Andrew says now. “But things happen for a reason, as tough as that was in the moment.”

With horses, it’s very much a balance between “strike while the iron is hot” and “patience pays off”. Andrew, who spent some time working for William Fox-Pitt a few years ago, errs on the side of patience with his horses. And despite this ill-timed setback, he says more time never hurt anyone.

“Dean”, as the now-eight-year-old is known at home, was found via prominent event horse producers DHI Event Horses, based in Yorkshire, England. Jeanne Shibo liked what she saw off of a video of the gelding, who was four at the time, and put him on a plane to the U.S. He displayed raw talent, but Andrew classifies him as a bit of a late bloomer. 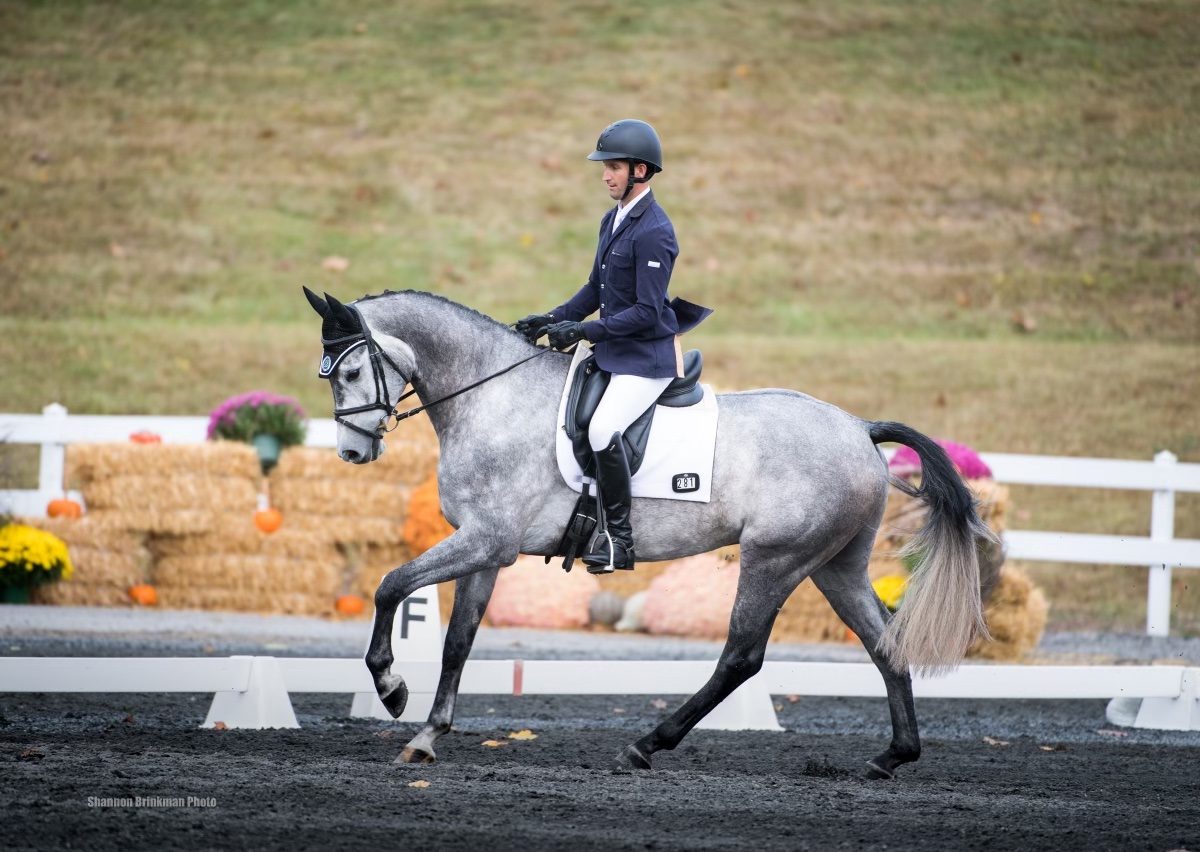 “He took a while to mature and gain the muscle and strength,” he explained. “He’s always had a fantastic brain and has been very trainable. He took to cross country really easily, so in his five-year-old year we aimed him for the Young Event Horse championships.”

D’Luxe Steel found all of this excessively easy, and soon enough he’d finished in the top 10 overall at the 2019 East Coast YEH championships at Fair Hill and was on his way to becoming a Preliminary horse. It was here that some of William’s philosophy came to mind.

“While I was working for William, he was under the belief that horses as a six-year-old don’t need to do a long two-star,” Andrew explained. “He felt that getting quite a few Prelims under their belt was better for qualifiers and experience. They do a lot of growing in this year and he felt it was better for them to stay and gain some lower-intensity mileage in this period.”

With a horse that exhibits such natural talent and enthusiasm as D’Luxe Steel does, it’s more than a little tempting to push just a little farther here, a little farther there. Andrew says he used to be more intensely determined to always be pushing forward, as well.

“I think a couple of years ago, I was guilty of the same thing,” he said. “I was really wanting to go to every event and keep taking all these lessons and pushing and training. William really helped me with that – he has a very relaxed approach. The horse trials were not to be won, necessarily. He would pick one here and there and allow them to move on – which is important to practice. That’s something I’ve carried on with me; I don’t feel the need to be competitive at every competition and that helps me be more selective about when I’m pushing and how hard.”

Of course, you can intend not to be competitive and still be sat on a horse with enough raw talent that winning comes naturally. Andrew laughs at this thought: “It’s easier at Prelim and below to win more often because you don’t have to go as quick to make it around clear.” But he also knew that stepping up to Intermediate might bring with it some growing pains – and he wasn’t going to push for the wins. Here, Andrew expressed gratitude for Jeanne Shibo – an owner who understands, trusts, and invests in the process, not just financially but emotionally and mentally.

But a win is still a win, and you can see that much in looking at D’Luxe Steel’s competition record: 15 wins in 33 USEA competitions dating back to the pair’s debut together in 2019. They’ve finished outside of the top 10 just twice and have never incurred a cross country penalty. Most recently, they won the 3*-S at Bouckaert International in Georgia.

So, while D’Luxe Steel was showing all the promise in the world to go and make a statement in France, Andrew accepted the unfortunate turn of events with the understanding that this would only help the both of them in the long run. The start to their 2021 proves this to be true.

“Things happen for a reason, and it meant that [D’Luxe Steel] could have an earlier holiday,” he said. “He grew a couple of inches and developed, so it was really good for him.”

As for the future, it’s a one day at a time scenario, but Andrew would love to see the gelding tackle the 3*-L at the Maryland 5 Star in October. “I think it would be a great progression,” he said. “So we’ll aim for that. He’s only eight and he doesn’t need to be stepping up to Advanced til later on in his nine-year-old year. So I do plan to keep him at the Intermediate level to gain experience, strength, and education before we think about that.”

But as it is with the really special ones, it’s always tempting. At the same time, it’s not a hard decision for Andrew to take his time.

“I think we as riders have the responsibility with the athletic and capable horses that are really willing to not ask more of them just because they’re willing to,” he said. “We almost have to protect them and respect the fact that they are able to and be willing to wait. I feel like I have a duty with this horse to stick to a plan instead of what he physically or mentally might be able to just accomplish, and he’s really shown me that this is the best way forward.”