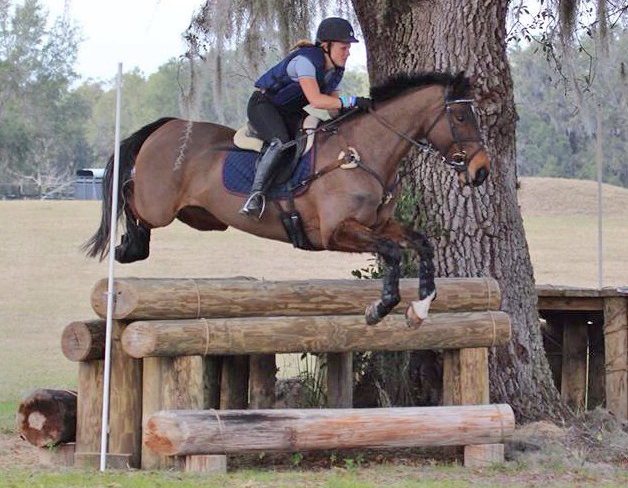 In the last edition of EN’s Got Talent, we chatted with Justine Dutton about Jollybo, her up and coming British Sport Horse mare. Preparing to contest the CIC2* at Plantation Field then, Justine said the weekend ultimately ended on an educational note for both of them.

“The dressage was good, but we really got nailed on some things that were completely my fault,” Justine said. “She’s getting really strong in the show jumping, and it just keeps getting better. On cross country, she had a bit of a rub so I changed her bit, which didn’t work out all too well because she can be so strong.

“I went out wanting to open her up a bit, but it ended up that I really couldn’t get her back. We had a drive by at the ruins because we just came in with way too much and missed our line to the next fence,” Justin said.

Unfortunately, their 20 on cross country at Plantation Field means they did not achieve their qualifier for the CCI2* at Fair Hill. “I looked ahead to Morven Park, where I had originally entered the Intermediate, but I changed it to the CIC2* to keep working on some things that needed improvement and get qualified for Fair Hill,” Justin said.

Jollybo came out swinging at Morven Park and really showed improvement across the board. “There was a lot of added pressure because of not being able to get a 20 to qualify for Fair Hill,” Justine said. “Dressage really improved, and the show jumping was pretty tough, and we had a silly rail that I’m still kicking myself over.

“I went out on cross country wanting to be conservative. The course had caused its share of issues, and I wanted to get around without any jump penalties and really get our confidence up going into Fair Hill. We achieved what we set out to do, and while we were a minute over time, we still got around clear, and that event really wasn’t the time to test everything we’d been putting together.”

Back at home, Justine plans to continue her preparations for Fair Hill under the watchful eye of coach Buck Davidson. “I’ll go up to Buck’s at least once before Fair Hill,” Justine said. “It’s funny because he’s never steered me wrong with this mare, and so I tend to defer to his advice on where to go next.”

As far as the struggles Justine has experienced in establishing a good rhythm with Jollybo, especially on cross country, she knows that it will take time. “Buck had me galloping downhill with no reins last week, and so that was … fun. And, of course, when he got on her and did it, she loped down the hill like she was half asleep. So I know it’s in there.”

Justine knows that her mare is talented, but she wants to ensure that they continue to become more competitive at the level before moving up. “I know she has the scope for Advanced, but there are plenty of things for us to work on, like control and speed, before I think we’ll be ready to move up,” she said.

Justine typically travels to Florida to train in the winter months and plans to work more on getting Jollybo more consistent and competitive at the Intermediate and two-star level, but she’s still aiming higher. “I imagine she could potentially move up next summer, but I want us to be competitive. I know we’ve got all the pieces; it’s just about putting them together, which is what we’re aiming for with Fair Hill.”