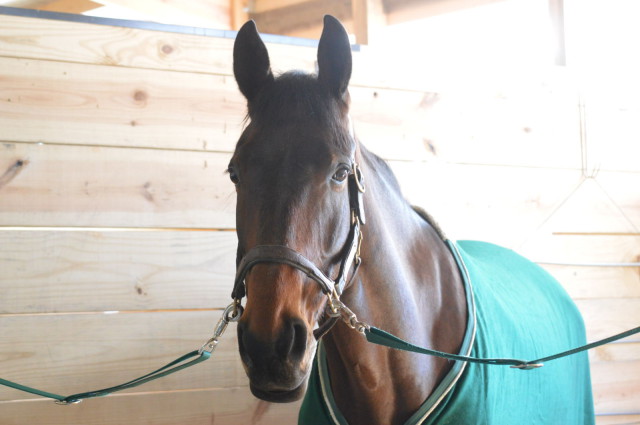 Last week, we met Megan Moore’s newest upper level prospect, Master Mind. A 6-year-old Irish Sport Horse, “Guinness” has made himself right at home at Team CEO Eventing and has shown sparks of promise when it comes to eventing.

Megan and Guinness worked hard at forming a partnership during the first few weeks of their time together, but once Megan got the horse on her side, she has found that he has a lot of potential. “Now he’s just the sweetest thing, and I think we’re on the same page now,” Megan said.

Currently running Training level, Megan and Guinness most recently won the Open Training division at Derbyshire Farms in Michigan earlier this month. “It’s really funny because he thinks he hates dressage, but he scores low 20s, so we just won’t tell him that he’s actually quite good at it,” Megan said. “But he thinks he hates it, so it takes a good 40 minutes to get him into where he needs to be for it.”

Cross country has been a work in progress for the young gelding, but he has picked up more confidence and skills as time goes on.”At Poplar (in February), he was very green. I definitely had to earn my keep on cross country. But we came home and worked and practiced more and the next time out he was just a machine, so I was very pleased with that.” Megan understands that Guinness is a more sensitive horse, so she keeps that in mind when she is training so that he can learn at his own pace.

Megan wants to see how far she can get with her exciting horse. “I’ve never really sat on a horse that is really good at all three phases. So that’s exciting that he seems to have everything coming together. He has one of the best gallops I’ve ever ridden, and I think he has the talent to go all the way. He’s got a lot of Thoroughbred, so he’s built for the job.”

Megan plans to take July and August primarily off from competition as she wants to ensure that Guinness doesn’t have to worry about competing during the hottest months of his first American summer. This fall, she wants to move him up to Preliminary and plans to work on his fitness and continue honing in the dressage and show jumping in the meantime.

Around the barn, Guinness has settled down from his early antics of nipping and kicking. “He’s completely changed his outlook on life. We’ve spent a lot of time with him because his former owner told us that we really needed to spend some time bonding with him because he is just a giant baby. He was very right! Hopefully we have a pretty good bond now.”