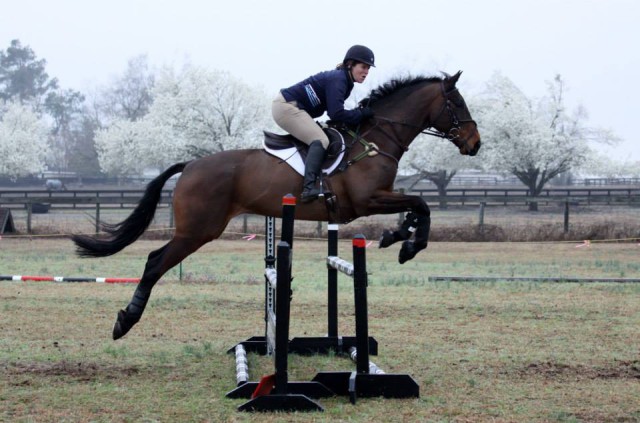 Megan Moore went on a horse shopping trip to Ireland last year and had the time of her life. Part of the trip including bringing home a couple of new prized possessions, one of which was a tall Irish Sport Horse gelding named Master Mind, or Guinness at home.

“I was very lucky that Robin Walker took us to Ireland,” Megan said. “Chris Ryan found (Guinness) for us after we’d tried probably a hundred horses. He’s by King’s Master, who is by Master Imp. I’ve been told that Master Imp horses are absolute monsters until they get on your side and then they’re the absolute best horses you’ve ever sat on, and that’s proven to be very true with this one.”

Guinness is 6-years-old and a rangy 17 hands. I was fortunate enough to stop by Team CEO Eventing while in town for Rolex this year, and I felt quite small standing next to the dark bay gelding. In Ireland, Guinness had begun his eventing career at the lower levels at the equivalent of U.S. Novice. “He was still pretty green, but he’d at least gotten started.”

“He was great when I tried him. I only rode for about 10 minutes,” Megan said. “It was funny because I just rode around and jumped a vertical a couple of times and got off. They thought I didn’t like him, but I just knew right away that I wanted to have him. It didn’t take long to fall in love with him. We got along very well.”

Megan prefers a more sensitive ride in her competition horses, as she feels that working with them to form a true partnership is most rewarding. “He’s a very sensitive type ride and very particular, so that works well for me.”

Once Guinness was brought home to Kentucky, Megan set about getting to know the gelding. “It wasn’t pretty at first. He dumped me at the mounting block, and he dumped (my working student) Andrea at the mounting block,” Megan recalled with a laugh. “So that was a fun first week. I definitely was thinking “what have I done?” for the first couple of weeks.“

“The first time we got him in a field at Paradise Farm, he flew sideways from one side of the field to the other. He was very rank but we seem to have worked through all of that now. He can be very angry or he can be very cuddly, so cookies have been our friend. We taught him to stand at the mounting block for a cookie, and now you could leave him standing there all day and he would just wait for his cookie.”

Megan feels that the two are really beginning to solidify their relationship. Megan took Guinness out at Novice in February of this year for their eventing debut together, and they finished first easily. From there, the gelding has won each start, with the exception of one withdrawal, he’s made at Training level. “He’s been amazing, so I’m really excited about him.”

Next week on EN’s Got Talent: Find out about more of Guinness’ quirks as he continues to grow into a grown-up event horse, as well as Megan’s plans for the future with him.