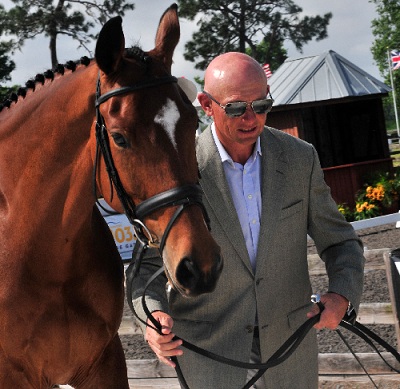 In our last edition of EN’s Got Talent, we met Leslie Law and Beatrice Rey-Herme’s promising British Sport Horse gelding, Tout de Suite. Leslie saw a lot of potential in the horse when he first met him on a shopping trip to Europe, and now has the makings of a top event horse on his hands.

Leslie is a big believer in working on the fundamentals with each and every horse that comes through his program. “I want to be able to ask enough of him without overfacing or overdoing him,” Leslie said. “It has been quite easy for him, but he was only 6 when he moved to Prelim, and I like them to have at least 12 months at that level under their belt.”

While Tout de Suite, or “Colby,” has the talent and scope necessary for the upper levels, Leslie laid a firm plan for the horse to become very solid at Preliminary before looking to move him up again, as he believes Preliminary lays the proper foundation for the upper levels. Rushing a horse, as talented as it may be, to move up is not a philosophy he exercises, Leslie said.

Tout de Suite finished out 2013 with an Intermediate debut, placing second at Rocking Horse in November. “It was an ideal situation. He was full of confidence,” Leslie said. “I was hoping that Rocking Horse would be a nice move up for him, and it served its purpose. It was exactly what I wanted to give him a taste of that level.“

The gelding came out in 2014 at the Intermediate level, completing three Intermediates, two CIC2* and one CCI2* so far. Tout de Suite earned his first blue ribbon at the level with a win in the Intermediate division at Carolina International in March. So far since moving up, the 7-year-old gelding has yet to finish out of the top 6, surely a testament not only to his talent but to Leslie’s meticulous training.

“He’s always been quite good with the dressage,” Leslie said. “He’s got a great attitude. In the early days, he was a bit spooky on cross country, and that’s where I really felt it was important to spend the time at Prelim. I really felt that the big pay off was coming out this year when I brought him straight out at Intermediate after debating whether or not to go Prelim first.”

“After a six-week break over the winter, he had really matured and came out a different horse across country,” Leslie said. “He’s always been very, very good, but with the miles he had at Prelim, I dare say he hasn’t had a weak phase yet this year.”

As for an aspect of Tout de Suite’s training that’s proved to be a challenge, it’s the gelding’s flying changes. “They don’t come as naturally to him as they do to some horses,” Leslie elaborated. “I think going forward that will be my biggest challenge.”

To that end, Leslie plans to continue focusing heavily on Tout de Suite’s dressage training, ensuring that he has the strength and skill necessary to continue to be competitive. Eventually, Leslie plans to let the horse step up to Advanced when he feels it is the right time.

“I’ve always got a plan in my mind, but then you have to take each horse as an individual,” Leslie said. “Some are much more forward thinking in their mind, others need time to mature into their body. You have to let them tell you these things.

“You have to listen to them a little bit, and maturity of the horse and his body and his mind and temperment sort of dictate those things.”