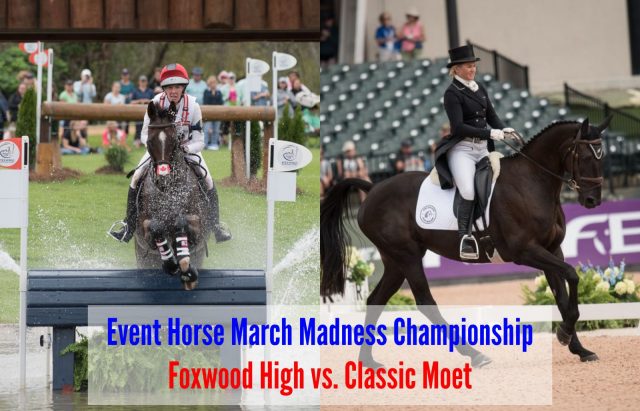 This is it! Choose wisely. Photos by EN.

Who is the fiercest event horse in the land? Our NCAA college basketball inspired March Madness showdown marches on today with the Championship, and we aren’t talking about UVA vs. Texas Tech! This match-up is much, much more serious than that: Foxwood High vs. Classic Moet.

How it’s seeded: To avoid petty squabbling amidst our chinchilla selection committee, we have objectively seeded the bracket according to the final 2018 WBFSH Rankings. Included in the bracket are the highest ranked eight horses from each of four regions: North America, UK/Ireland, Europe and Australia/New Zealand. The higher the points earned in 2018, the higher the seed. The six winners of CCI4* events in 2018 as well as the 2018 World Champion received automatic top seed buy-in.

Today’s match-up: We’re down to the wire! Last week’s Final 4 was a battle of the titans, with Canadian superstar Foxwood High edging out the legendary fischerRocana FST and five-star supermare Classic Moet taking down reigning world champion Allstar B. Now there’s only one match-up left to determine our equine victor. 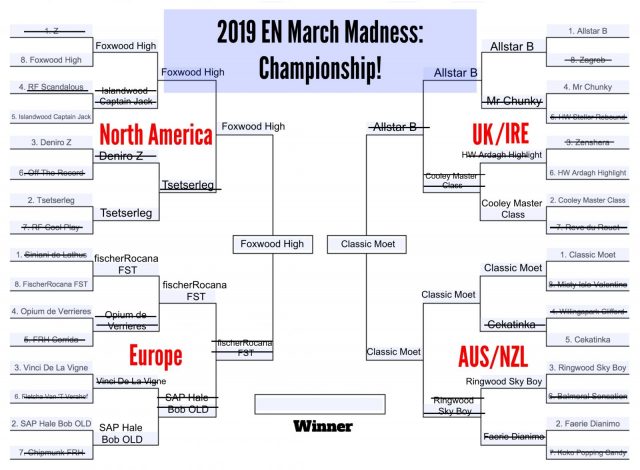 Championship voting is open through midnight tonight, with the winner to be announced on Tuesday. Go vote, and Go Eventing!