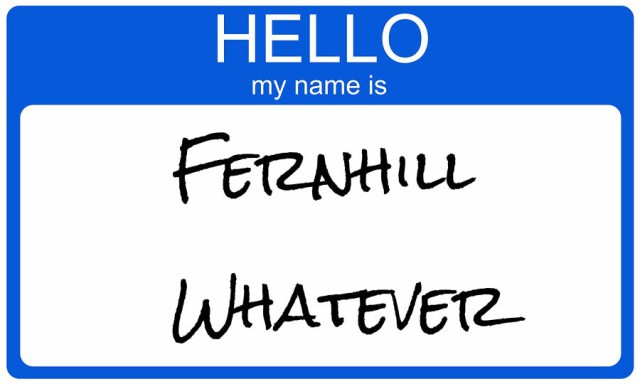 There’s no better advertising for your eventer sourcing/breeding operation than attaching your name to as many winning horses as possible. Here are the stories behind five of the most dominant prefixes in the USEA Horse Registry Database.

The Fernhill prefix designates horses sold through Fernhill Sport Horse Centre in Kilkenny, Ireland. Founded by Carol Gee, a former member of the Irish Event Team, the first Fernhill horse entered the scene in 2005 and now, not quite a decade later, the name is all over the sport. There are currently 96 horses with the Fernhill prefix registered with the USEA, but even that is a misleading figure, as many Fernhill horses aren’t carrying the prefix.

Phillip Dutton’s WEG alternate Mighty Nice, for instance, was sourced through Fernhill, as was his 2008 Olympic mount and Rolex winner Connaught. Fernhill Fearless, named to the 2014 WEG squad with Kim Severson, is the first Fernhill prefix bearing horse to represent the U.S. in international team competition. Read more about the Fernhill empire via EN’s February 2014 interview with Carol Gee. 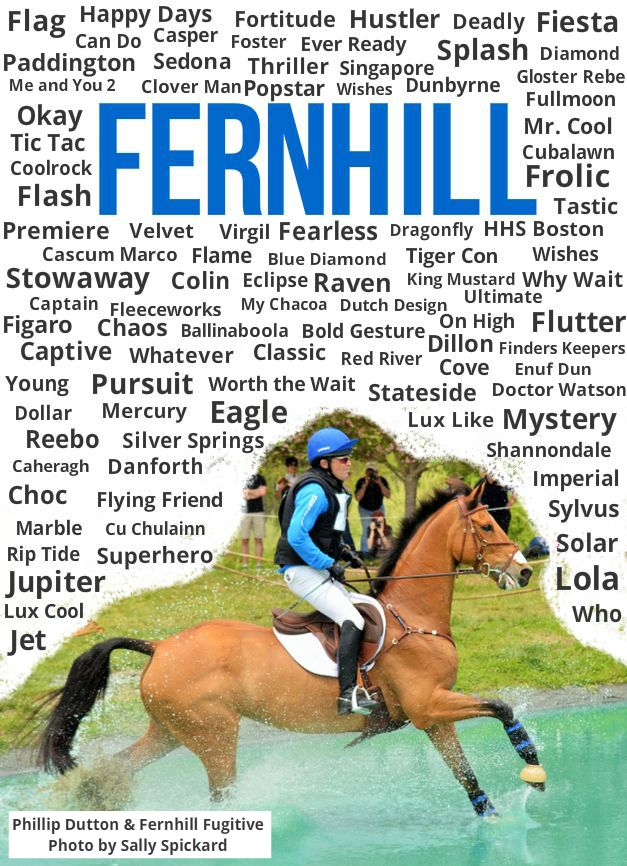 Founded in 1998 in New Zealand by Frances Stead, Clifton Eventers has established itself as a launchpad for internationally proven sport horses. The program pairs promising young horses with its team of experienced riders, led by principle rider Jock Padget. Superstars currently within the system currently include Clifton Promise, whose 2013 Burghley win with Paget in the irons was infamously clouded by a positive drug test, and four-star horses Clifton Lush and Clifton Pinot.

There are 69 horses with the Clifton prefix registered with the USEA, with many success stories among them, for instance, the prolific career of NAJYRC veteran Clifton Peekachu (pictured below) — you can read his story here. 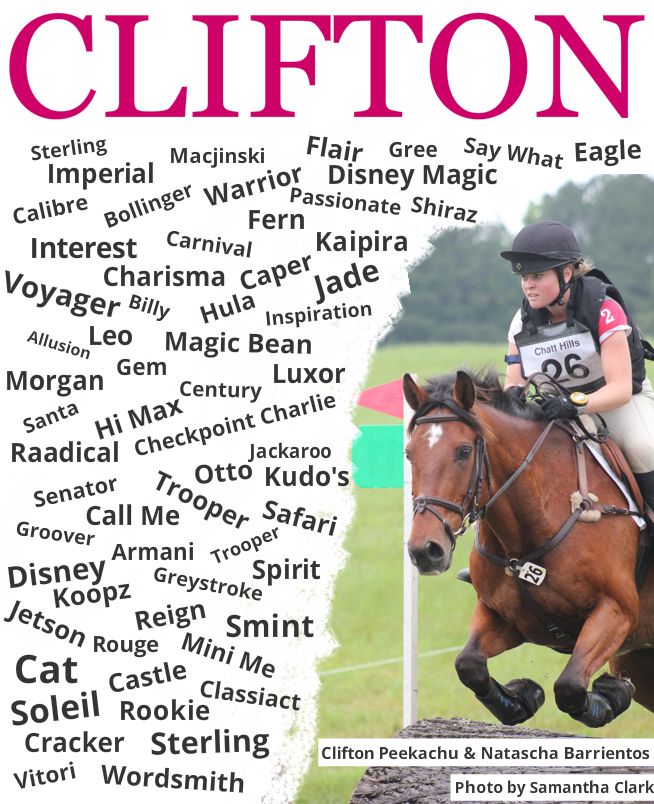 Unlike Fernhill and Clifton, the prefix Flagmount’s is a nod to the Irish Sport Horse stallion Flagmount’s Freedom, sired by Flagmount King and grandsired by King of Diamonds. Owned by Janet Marden, Flagmount’s Freedom stands at stud at Leaning Oaks Farm in Bryon, Texas, and was competitive through the long-format two-star level. At age 17 he’s still out competing at the Prelim and Intermediate levels, a testament to his tough Irish breeding.

His progeny are known for being amateur friendly but talented — pictured below is Flagmount’s Sterling Prince, who has competed through the CIC3* level with Sara Kozumplik-Murphy. There are 34 Flagmount’s horses listed with the USEA, many of them coming up the levels. Janet Marden shared a history of the Flagmount prefix with EN here. 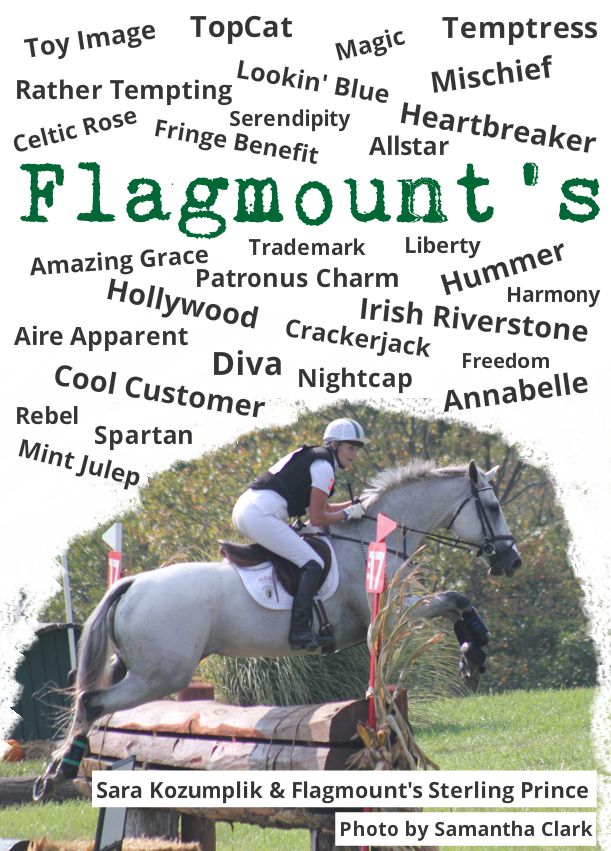 Also ringing in at 34 horses in the USEA Registry is the prefix Sportsfield. It references Sportsfield Horses, a yard owned by Paul Donovan in County Tipperary, Ireland, that focuses on the procurement, producing and selling of Irish Sport Horses. Sportsfield horses have done well for themselves — on the international level, Andrew Tinkler’s Sportsfield Othello was named as a reserve for the 2014 Irish WEG event team, and several Sportsfield horses are out competing at the upper levels in the United States. Pictured below is Sportsfield One O Two, who has competed through the Intermediate level with Christine Duke. 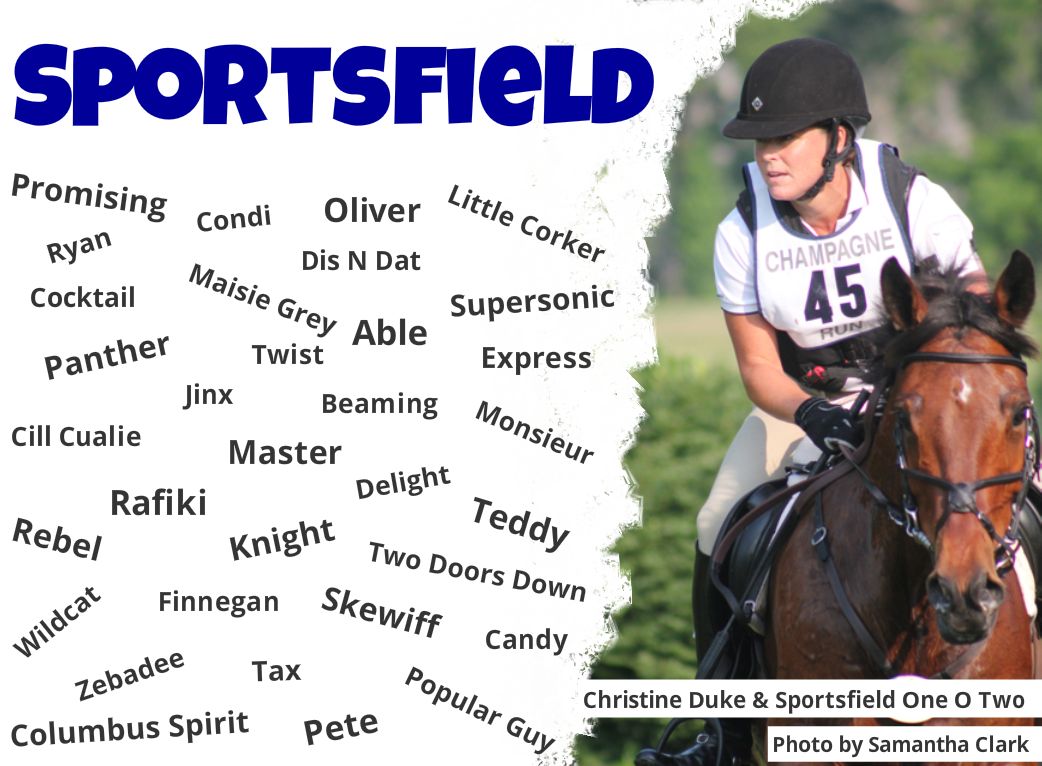 The prefix Ringwood refers to Ringwood Stud, located near Newcastle West in Ireland. The stud dates back to 1860 and has been handed down the generations, most recently to Peter Leonard, a former director of the FEI and the SJAI and current HSI stallion inspector. The family has a rich tradition of horsemanship: Peter’s sister Ann O’ Grady and his brother Terrence produced Buck Davidson’s 2014 WEG mount, Ballynoe Castle RM, among other top eventers.

Ringwood’s most famous graduates include Bettina Hoy’s champion four-star horse Ringwood Cockatoo and, on the U.S. side, Tiana Coudray’s 2012 Olympic mount Ringwood Magister. There are 24 horses with the Ringwood prefix registered with the USEA. 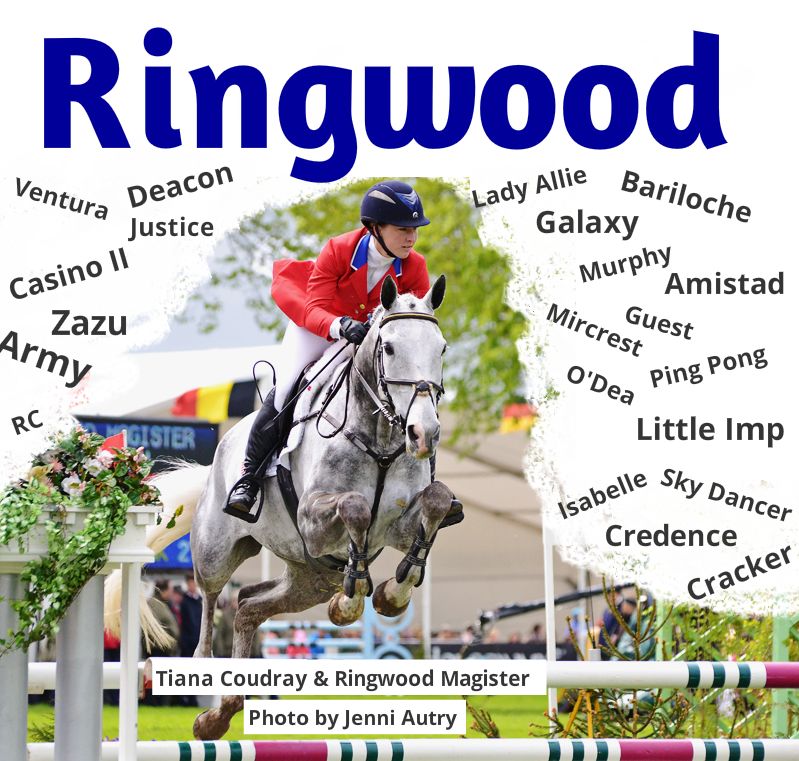 What are some other prefixes that are building an empire in the U.S. event world? Tell us in the comments section below!